We Need a Mikveh Revolution 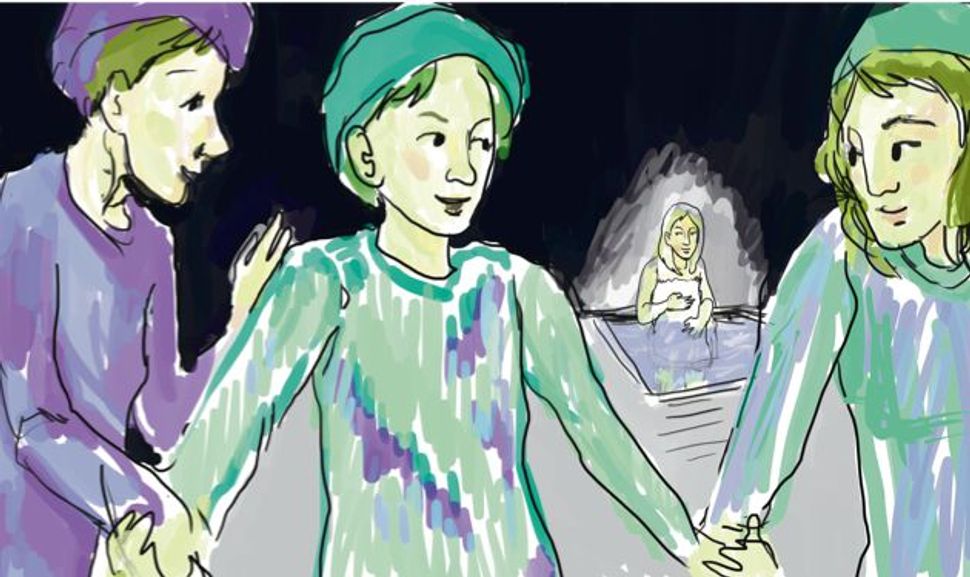 A New Presence: Women need to be allowed to play a bigger role in conversion ceremonies. Image by Lior Zaltzman

Recent events have forced us as a community to take a hard look at the practice of having female converts immerse themselves in a mikveh before a rabbinical court of three men. In the wake of news that a Washington rabbi, Barry Freundel, allegedly spied on women as they were engaging in this ritual, others have described their own troubling and, at times, traumatic experiences at the mikveh.

It is the moment to ask some fundamental questions about how we treat converts. Some are questions of Jewish Law, such as whether it still makes sense for women to immerse themselves in the presence of a beit din, or rabbinical court. But there are other bigger issues to consider about how this ritual is conducted.

During the conversion process, the prospective converts are judged in regard to their sincerity and whether they have satisfied the criteria that a beit din has laid out. All this is necessary, but it is also disempowering, particularly when this difficult stage continues for a protracted period of time. What’s more, this can be an invitation for exploitation and abuse. It is our obligation to fix this situation.

One response to the concern of abuse has been the appointment of an ombudsman to oversee conversions done under an organization’s aegis, and to whom a potential convert can turn to when troubling circumstances arise. This is a good technical fix, but it misses the point that more fundamental changes are needed.

The rabbi should also give this new conversion candidate multiple opportunities to voice questions and concerns. Ideally, a support team should be assigned to the candidate, people who would learn with her and welcome her into their homes. Significantly, this team would also include an advocate whose role would be to represent the candidate to ensure that her interests are best protected. If this becomes standard operating procedure, the increased transparency and options will encourage all rabbis to evaluate their procedures frequently, creating a better system for all involved.

Perhaps most important, the potential convert must be given options at all stages of the process. For example, working within parameters set by the rabbi, the conversion candidate should choose which of the multiple halachic books to use to learn about the various mitzvot, which mikveh to use for the immersion and who will accompany him or her to the mikveh.

Particularly in the case where the rabbi requires a female convert to immerse in the presence of the male beit din, the convert must be permitted to choose among various options: wearing a robe while immersing; having the beit din stand in an outer room with the door open just a few inches, or having one — or even three — women with her in the mikveh room who ensure the door is shut until she is under the water. Her choice in this matter gives her some control over this difficult part of the process.

These changes, taken together, will go a long way in recalibrating the power imbalance that has, unfortunately, been a constant part of the conversion process.

Another systemic issue that must be addressed is the absence of women from this halachic conversation. A number of years ago, a rabbanit, Michal Tikochinsky, wrote an in-depth analysis of the requirement for a beit din’s presence in the mikveh room at the time of immersion, and her article, available both in English and in Hebrew, has been referenced a good deal in the current discussions. Tikochinsky’s writing is significant not only for its halachic analysis, but also for modeling how women must be a part of the halachic conversation and not just its subjects. Unfortunately, the current discussions on this topic are still being held almost exclusively by and between men.

In addition, the actual stories and voices of women who have converted — while now thankfully being heard widely on social media — are almost completely absent from the halachic writings on this topic.

Here is one woman’s recounting of her traumatic experience: “I felt very vulnerable and naked despite the sheet, being the only unclothed person in a room of four clothed people surrounding me…. They weren’t sure if the sheet had gotten in the way of my body and the water, and they needed me to immerse again. I would have to remove the sheet and dunk three more times. I was stunned into inaction. This was my worst nightmare coming true…. Plus, if I refused to comply with their demand now, they might question my compliance with halacha [sic] in future areas and forbid me to convert at all.”

This voice, however, is not heard in the halachic discourse. At most it is referred to, filtered and distilled, losing its poignancy and urgency: removing women and their voices from the conversation.

This a serious concern in all matters where men issue halachic rulings for women. But it is especially worrisome in this case, as the very phenomenon that we are dealing with — a beit din of men standing over a woman in the mikveh to oversee her acceptance of mitzvot, to witness her immersion and to determine the validity of her conversion — speaks directly to the marked power imbalance in the system.

As we continue to address the issues around conversion, it is critical that we pause at this moment to assess the dynamics that are at play in the process of conversion. The time has come to embrace a model of the rabbinate and of Halacha that is less hierarchical and more collaborative. We will all be better off for it.

We Need a Mikveh Revolution