It’s Tough To Walk Around Paris as a Jew — Or Is It? 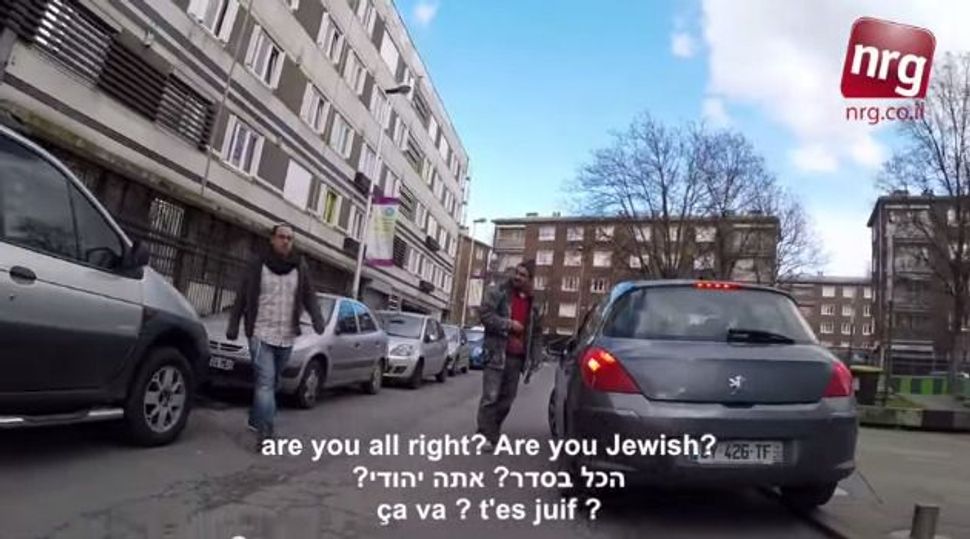 An Israeli journalist who walked around Paris for hours while wearing a kippah to test attitudes to Jews documented multiple threats and insults hurled at his direction.

Zvika Klein, a reporter for the news site nrg.co.il and the Makor Rishon daily, on Sunday released the footage from his excursion last week around Paris and its suburbs. He was inspired by a video released last year that shows Shoshana Roberts being sexually harassed repeatedly while walking in New York. Since it was published on YouTube, her video has registered more than 39 million views.

In one scene, a person wearing a black knit cap says “Jew” and walks alongside Klein, who was being filmed secretly by a colleague. In two separate incidents, one involving a man and one a woman, passers-by look in Klein’s direction as he walks past them.

In another part of Paris, passers-by call out “Vive Palestine” at him. In several cases, locals hurl profanities at Klein, calling him a homosexual and suggesting he had come to their neighborhood looking for sex.

Ok. Let’s pause here. I think we can all agree that France has an anti-Semitism problem. The recent hostage situation and shooting at a Paris kosher supermarket and repeated attacks on French Jews over the past couple years more than prove that point. Anti-Semitic incidents recorded in France more than doubled in 2014 over the previous year, reaching a five-year-record of 851 instances.

But this video is a shock and awe experiment. It doesn’t teach us anything.

As a Jew who has both visited family and briefly lived in France, I completely understand the knee-jerk reaction of keeping one’s identity on the down-low. Paris is not New York, where let’s face it, even non-Jews are kind of Jewish and Yiddishisms are just another form of New Yorkese. Jews have a long and frought history with the French state that is more complex than can be explained in this blog post. But I think it’s worth pointing out that one journalist walking around a heavily Muslim neighborhood with a kippah isn’t necessarily representative of the average French person’s reaction towards Jews.

Don’t get me wrong. Jews, like anyone, should be able to walk anywhere they want without getting slurs hurled at them. Is it wrong? Yes. Is it upsetting? Very. Is it surprising? Not really.

The video itself makes no distinction between neighborhoods, which is somewhat problematic in a video headlined “10 Hours of Walking in Paris as a Jew.” Paris is a big place, with many internal tensions. Dropping one kippah-clad reporter into that mix does not an instructive video make.

It’s Tough To Walk Around Paris as a Jew — Or Is It?