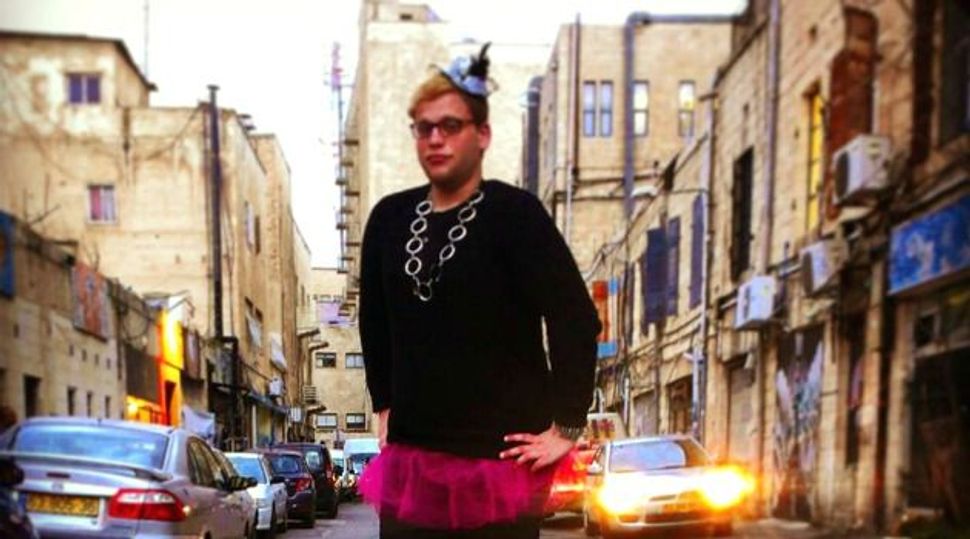 “Did you see the drag show?” I asked a friend at last night’s Winter Noise Festival. “Yeah,” he responded, “did you see the racist a**holes?”

For four years running, the Winter Noise Festival has held public events every Monday night in February, pushing the city’s religious-conservative limits. Last night’s drag show took place amidst well-quaffed street musicians (including a klezmer marching band) and cave-bar dance parties (heavy on beards and vintage outfits), and was advertised discreetly as the “Shushan Run.” The only descriptor of the event on the municipality-sponsored website referred slyly to “the wildest race in the city” — a “race in heels” — for Jerusalem’s queens.

And what fun that “race in heels” was! One queen I interviewed was wearing a miniskirt, fishnets and six-inch platform heels in the chilly Jerusalem night. Imagine running a race in those! Her makeup was caked to her face and I had the thought that gobs of her mascara might soon begin falling from her eyelashes by the sheer force of gravity. Her yellow jacket made her look like a six-foot-six queen bee. Her name was “Mama Off” and she told me that the best thing about the drag show was the protest happening next door.

Mama Off was referring to the angry noises of Benzion Gopstein and his Kahanist cronies in LEAVA, a racist, xenophobic, violent organization just outside the event grounds. Last year I wrote about LEAVA’s protest against another Winter Noise Festival event in which Jews and Arabs joined together in song; their activities have only gotten more angry and violent since then.

But Mama Off was happy about the demonstration. Why? Because “it demonstrates that we’re doing something right — and it shows that racism and homophobia are the same thing.”

Sure enough, the protest didn’t go well for Gopstein and his ilk. Meretz campaigners, who had shown up to the Festival in droves, with pride flags and stickers to support the show, instinctively protested in response. Well before the show was over, Gopstein was ready to call it quits. The head of Jerusalem’s Meretz Pride Forum, Dror Mizrahi, called it a “victory of light over darkness.”

Courtesy of the Meretz Party

Leshem Brosh, one of the organizers of the event (which, contrary to how it was advertised, was put together by the Jerusalem Gay Student Association), said that the idea was to create an event that, unlike a Pride March, wasn’t explicitly political. The goal was to “simultaneously have fun and to blur gender.”

“We wouldn’t do this event in Me’ah Shearim (an ultra-Orthodox neighborhood),” he said. “I thought it was terrific — there were over 2,000 people there.”

Between the fabulously slinky, sequined dresses, the sweet lip-syncing of songs like “It’s Raining Men,” and the final call — with Avrahm Freid’s “Ani Ma’amin” blaring — for men in drag to dance, most people just enjoyed the show.

That this event took place is not to be taken lightly. Initially it looked like Jerusalem Mayor Nir Barkat, who faced strong ultra-Orthodox opposition from within the city council, would cancel the drag show.

In January, when the event was made public, members of the city council threatened to reject the 2015 “culture” budget in its entirety if the “abomination” was not pulled from the lineup. The opposition quickly jumped to the national level. Sephardic ultra-Orthodox MK Eli Yishai was one of the first to join the fray. “It is maddening,” he said, “to hear that the Jerusalem Municipality would rather spend money on such a dangerous event, instead of investing in values-based education for the city’s youth and in Jewish culture. Such a degrading event has no place in the Jewish State.”

Both Labor and Yesh Atid published statements to the opposite effect. Yesh Atid called on the Jerusalem Municipality to “stop being ashamed of its residents,” and the Association for LGBT Rights said that “the Jerusalem municipality’s decision is another example of direct discrimination against the LGBT community and should be given no legitimacy.”

The kerfuffle didn’t last too long — Ofer Berkowitz, the Jerusalem city council member who holds the culture portfolio, soon made it clear that the show would go on. He announced that the city council would “continue to address the entirety of the population of Jerusalem, and strengthen tolerance and moderate forces in the public sphere. On one side there will be Torah lessons, on the other there will be the ‘march of heels,’ and both can live together in peace in Jerusalem.”

At the show, one Jerusalem resident, Bracha Arnold, expressed her feelings about the event and the protest this way: “The first thing I saw was protestors,” she said, “and then right next to them I saw people having a great time and being silly. It felt like a reaction to the rising levels of extremism [in the city].”

She was right: the queens were the stars of Jerusalem last night.