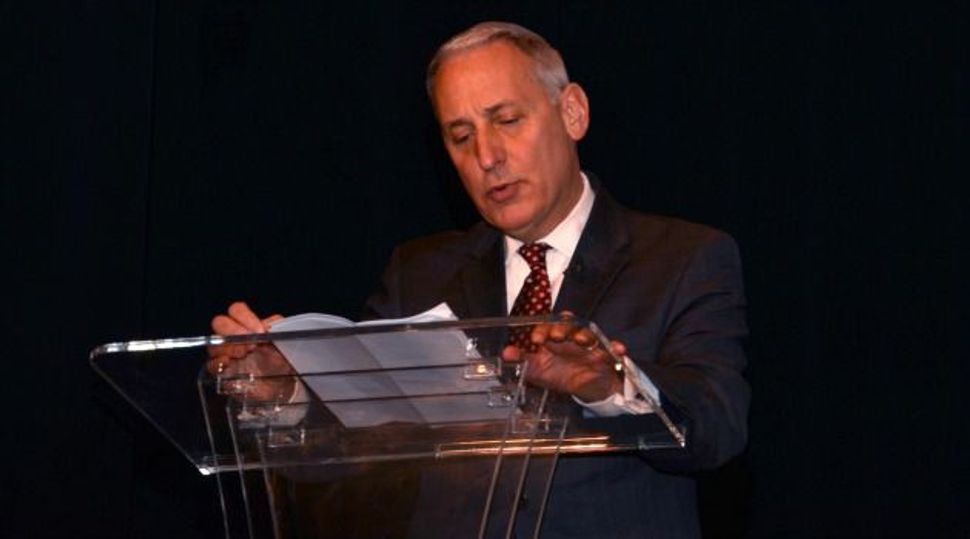 Trying to get an unbiased education about the Israeli-Palestinian conflict is a never-ending conundrum. It’s like the parable of the blind men and the elephant — one blind man grabs the tail and says, “An elephant is like a rope,” another feels the trunk and says, “An elephant is like a snake.” Depending on where you go for information, you may get the tail or the trunk, but never the whole elephant.

On the evening of February 25, Manhattan’s 92nd Street Y hosted a screening of Jerusalem U’s documentary, “Crossing the Line 2: The New Face of Anti-Semitism on Campus.” After the movie there was a panel discussion featuring Eric Fingerhut, President and CEO of Hillel International, and three student activists, Justin Hayet from Binghamton University, Chloe Valdary from the University of New Orleans and Daniel Mael from Brandeis University. The moderator was Andy Borans, executive director of AEPi International.

For those who don’t know, Jerusalem U is a far-right, pro-Israel online organization. Don’t be fooled by the name: they aren’t a real university. But if you Google “Jerusalem University,” you get to their website.

I asked Jerusalem U founder and CEO Rabbi Raphael Shore to explain the U in the organization’s name. “Have you ever looked at iTunes U? Hello?” he said. “It’s a very common thing these days. If we had said ‘University’ people would say, ‘Wait, what’s going on?’ but when we say ‘Jerusalem U’ it indicates we are an Internet place of learning.”

The film is a powerful depiction of deeply disturbing anti-Israel and anti-Semitic events on campuses, including shouting matches and swastikas. The shocking scenes in the film may inspire sympathy or fear and a motivation to fight for Israel — all of which are valuable aims — but I felt I only got the elephant’s tail. Where was the rest of the elephant, i.e., the opposing views?

I asked Jerusalem Post managing editor David Brinn if he found it odd that Hillel’s Fingerhut would align with this type of one-sided program. “I don’t find it jarring or strange that Fingerhut is appearing on a panel about anti-Semitism on college campuses,” he said. “Regardless of the political orientation of Jerusalem U, it’s a fact that anti-Jewish bias disguised as anti-Israel demonstrations and actions is on the rise on campuses, and it’s an issue that obviously affects Fingerhut and Hillel. So it makes perfect sense for him to appear on a panel that discusses the Jerusalem U film.”

“I would be delighted if Jerusalem U was exaggerating in order to gain advocates for Israel, but I fear that their films and projects point to real problems facing Israel and the Jewish world,” Brinn added. “I commend Fingerhut for including Jerusalem U under the same tent that he sits in with J Street.”

J Street U director Sarah Turbow, who also attended the screening, had a different view. “There are many organizations in the pro-Israel sphere that talk about themselves as apolitical. But I don’t believe that there is a way to educate about Israel without being political. It would have been very interesting to hear from pro-Palestinian perspectives in the film. My impression is that the film wanted to show one particular side. If that was their goal, they achieved it.”

Good to know I’m not the only one seeking more than one of the elephant’s appendages.

Hillel Spokesperson Arielle Poleg told me there was no conflict for Fingerhut. “Being pro-Israel is in Hillel’s DNA,” she said. “There is no contradiction between Hillel’s educational mission and its Israel advocacy. Under Eric’s leadership, Hillel has been pleased to partner with individuals and organizations representing a broad swath of opinion.”

This seemed like the tail but with a piece of the trunk.

Matti Friedman, a Jerusalem-based journalist, said, “The resurgence of anti-Semitism is very real but much of the hysteria coming from the Jewish community is not helpful. What we need is not more advocacy but more intelligent journalism by knowledgeable people without an ideological ax to grind.”