Preparing to Fast and Shpiel 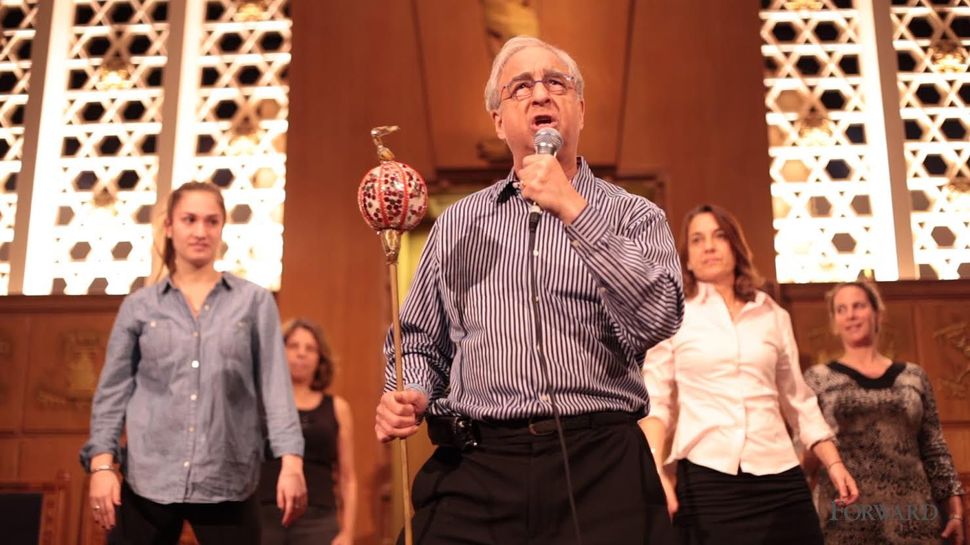 It must be embroidered on a sampler somewhere: “Before Jews party, they should suffer a little.”

Thus, we fast the day before Purim.

Purim is, hands down, the biggest party of the Jewish year. Forget fall’s Simchat Torah, with its sips of single malt, THIS is the Big Megillah and we’re supposed to get trashed.

Not only do we dress up in nutty costumes and enact the Esther story with spectacle and farce; we’re instructed to get so drunk we can’t tell the difference between Mordechai (good guy) and Haman (really bad).

But before the frivolity and inebriation begin, we’re ascetic. We stop eating. Again. This will be my FOURTH FAST of the year. With two more to go. (Why aren’t more Jews more svelte after all these abstentions?)

This Wednesday (March 4) is Ta’anit Esther – the Fast of Esther, which is not in the Bible but was created by the rabbis in the 9th Century.

It springs from the three-day fast that Esther undertook in the Book of Esther (which is in the Bible – in the Writings section – and which is the basis for the Purim holiday).

Esther, a beautiful, closeted-Jewish woman, decides to prepare herself with a fast before daring to approach her imperious husband, jthe Persian king, Ahasuerus, with tricky news: she’s actually Jewish (a fact she’d hidden) and the King’s counselor, Haman, plans to kill all the Jews.

“The thing that I most admire about the Esther story,” says Dr. Erica Brown, a D.C.-based author and educator who wrote her doctorate on Esther, “is its notion of the tests that are thrown at an individual and the way in which they transform themselves as a result.”

Esther was transformed by her found courage. She took on a task which she first refused.

“Esther’s cousin, Mordechai says to her essentially, ‘How do you know you weren’t put in this position of royalty for exactly this moment?’,” Brown says. “I would throw in the Sheryl Sandberg, ‘Lean In’ way of looking at this moment – of initially having the insecurity to say, ‘I’m not the right person. I can’t do this for any number of reasons’; you opt out of your own future. And then you have someone like Mordechai who says, ‘No, this is your time. Take advantage. Leap into that.’”

This makes me think about the challenges I’ve avoided, the moments I’ve chickened out. There are too many to confess. But this holiday forces me to reflect on leadership: what it means to be tapped to steer, when that wasn’t your plan.

Even this holiday is a gauntlet I normally wouldn’t take up. But Ta’anit Esther seems like an ancient test resurrected: Esther asked her people to fast with her before she risked her life. The least I can do is fast from dawn to dusk, in solidarity, in Esther’s honor, as she requested generations ago.

“I think the joy of victory in her story is so much more colorful, rich and deep when you participate in the suffering in some way,” Brown says. “The joy that I experience every Purim is heightened by the fact that I’ve fasted and I’ve tried to put myself in that moment of risk – leadership risk – that Esther took all those years ago, because so much pivoted on that one individual. So being with her in that moment of anxiety and suffering and worrying about the future helps me celebrate her.”

Esther is not only a paradigm of pluck and cleverness, (she’s politically astute in the story, winning allies in the king’s court, not to mention the king himself); In recent years, she’s become a symbol of enslavement.

Yaffa Epstein, who teaches Talmud at The Pardes Institute of Jewish Studies (based in Jerusalem) and at Yeshivat Maharat in New York (the first Orthodox Yeshiva for women,) tells me that Ta’anit Esther was chosen in 1990 to be Yom Ha’Agunah – The Day of the Chained Woman.

The Agunah, or “chained woman,” is the woman who cannot get free of her marriage because according to Jewish law, only men can dissolve a wedding vow. This forces women to remain in a loveless marriage or to carry the stigma of remarrying illegally, without a “get” – a divorce certificate.

Just this winter, there have been headlines about Gital Dodelson, 25, who waited three years to obtain a get, and Rivky Stein, also 25, who testified in January about being unable to break free, despite her husband’s alleged abuse. “I can’t get remarried,” she said, weeping – according to press accounts. “I can’t date. I don’t have that hope for the future of the family I always wanted.”

The Day of Agunah was assigned to the Ta’anit Esther very consciously by ICAR – the International Coalition for Agunot Rights – three decades ago.

“They wanted to tie it to Esther,” Epstein explains, because she is this powerful woman who brought salvation, but also because she’s trapped in this terrible marriage and is a victim of the king’s power.”

Epstein invokes the Bible verses which describe the King vetting all the virgins, who must “go in” to him one by one, presumably to be crudely assessed.

“Ahasuerus was a terrible human being in that he took every virgin in the entire country to his palace to look – to see who he wanted,” Epstein says. “But really he probably slept with them all. It’s very likely. And once you become part of the king’s harem, you don’t go back to normal life; so there are thousands of virgins – basically you have a whole generation of women who have been taken to the palace and probably treated terribly. In reality, there are thousands of women who are trapped there.”

The link between Agunot and Esther is also described in an article by Rachel Levmore, an advocate in the Israeli rabbinical courts and the coordinator of the Agunah & Get-Refusal Prevention Project.

“Like Esther, the agunot of the present era do not want to be in the marriage in which they find themselves,” she wrote to support proposed legislation to mark “Agunah Day” in the Israeli Knesset. “Like Esther, many women who are refused a get live in fear of their spouses and live a double life. Like Esther, the agunah, a victim of get-refusal finds herself lacking control of her own freedom.”

Blu Greenberg, who founded the Jewish Orthodox Feminist Alliance in 1997, sees a different linkage. Present at the early ICAR discussions about whether Ta’anit Esther was the right fit for Agunah Day, Greenberg recalls, “Some women argued that it would muddy the focus on Purim and their rabbinic authorities would object. But others felt that attaching Agunah awareness to a prominent Jewish calendar day would raise consciousness. Two members of the coalition pulled their organizations out of this project, but it went forth. Ta’anit Esther was chosen because it was a fast day – one decreed by a Jewish heroine and named after her.”

That said, Greenberg says we have to do more than pray and fast to help the women currently entrapped. “Hopefully the prayer and awareness on Ta’anit Esther will inspire us to activism. God is not going to solve this problem. ”

When I ask Greenberg for a suggestion as to what I might do that’s meaningful on Wednesday, she urges me to educate myself about agunot and the different efforts being made to alleviate their plight. A good place to start, she offers, would be to view the Golden Globe-nominated Israeli film in theaters now, called “Gett: Trial of Vivian Amselem,” which depicts a woman who is desperate to start anew.

The Washington Post review says, “It’s not Viviane who’s on trial in ‘Gett’…Rather, it’s the system that’s perverse, in the way that it treats wives not like people, but property.”

As I make my movie reservations on Fandango, I can hear some traditionalist readers insisting it’s a bastardization to make the Fast of Esther about Jewish women who can’t get divorced. “I don’t think it’s a bastardization,” says Yaffa Epstein. “I think it’s an attempt to ground my reality in my ancient narrative. If the Fast of Esther was just about some woman who was the queen of Persia, why should I care today? So we need to answer that question as a Jewish community: Where is the relevance? What can it teach me today?”

Preparing to Fast and Shpiel