Why — and How — Baltimore Jews Must Act Now 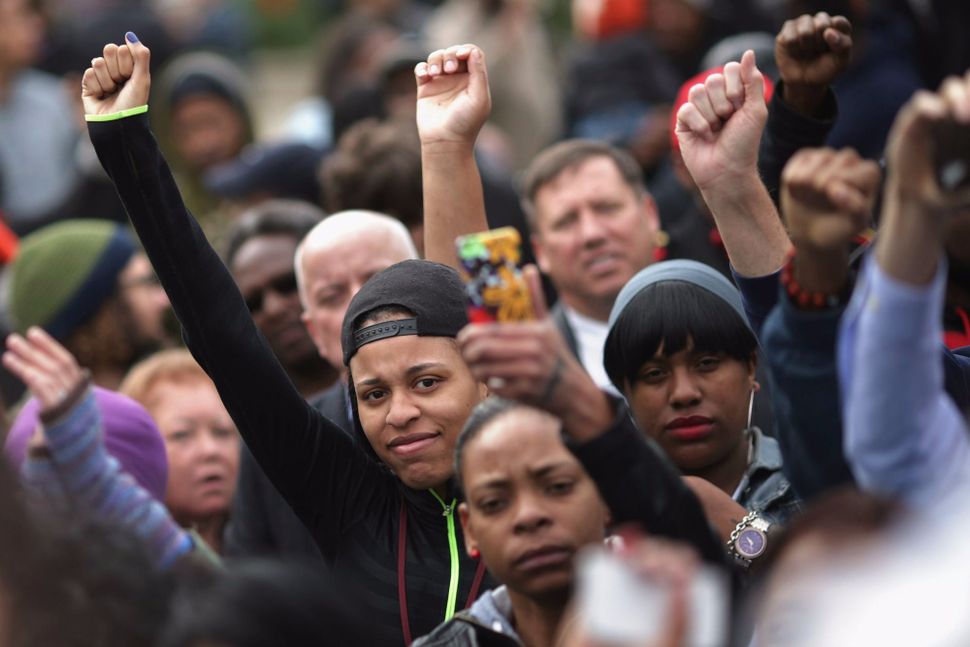 As helicopters buzz over Baltimore’s Westside, I’m thinking back to last Shabbat, when my community of Jews United for Justice members joined the wider community to publicly grieve, call for justice, and say kaddish for Freddie Gray, the 25-year-old black man slain by Baltimore police officers. His death — which we mourned across the street from the Gilmor Homes where he grew up — must remain central to any conversation about how our city moves forward, even after media attention shifts from a broken spine and a stolen life to broken windows and stolen merchandise.

Fittingly, our memorial opened with a discussion of the brokenness we witnessed around us. The Westside of Baltimore, like black communities across the country, has been the target of decades of racist policy, culminating in recent years with “zero-tolerance” policing practices and mass incarceration that extend and deepen the oppression struggling residents face. Freddie Gray’s death is one in a long succession of similar killings in Baltimore. Before saying kaddish we read out a few of their names too: Tyrone West, George King, Anthony Anderson.

As a young Jew, I was proud that our Jewish community’s leaders were there to bear witness with me. Rabbi Daniel Burg spoke to the Torah’s mandate of piku’ach nefesh, that we are compelled to act if by doing so we might save a life. This was especially poignant for Jews coming together on Shabbat (although, he noted, we were not violating Shabbat by marching with our neighbors). Rabbi Geoff Basik noted that we were “doing and becoming so that our lives [all lives!] may be blessed.”

Alongside the words of these rabbis, JUFJ Baltimore Director Molly Amster reminded us that short-term accountability for Freddie Gray is at risk because Maryland’s laws, among the most favorable to police in the nation, stand in the way of full and fair investigation. This session the Maryland General Assembly failed to consider changing these obstructive laws, despite powerful calls for change and determined organizing from the community. We hope next year we can pass new legislation. To close, we sang Oseh Shalom and I Can’t Breathe, a poem by Luke Nephew that Jews for Racial and Economic Justice took up after Eric Garner’s death.

The two dozen of us from JUFJ then joined those who had assembled in front of the Western District Police Station. A community rent with anger found expression in that cordoned-off intersection. We took leadership from black clergy and organizers, recognizing our role as supporting and amplifying their voices. The thousands of Baltimoreans who congregated in front of City Hall calling for justice for Gray’s family profoundly united communities — including us Jews — in this deeply segregated city.

On Tuesday, Baltimoreans from Rabbi Burg’s Westside shul and across the city came together to clean up, as it became even clearer that deep, substantive social change is needed. This change looks a lot like the experience we shared on Saturday. First, we as a Jewish community must engage in the deep underlying divides of racism and classism, seeking to understand how these conditions allow police officers to kill people of color with impunity. We must turn that knowledge into action, by dismantling the statewide rules that put law enforcement above the law. Finally, we must reach out to, take leadership from, and build relationships with people and communities most directly affected by this violence.

As Rabbi Susan Talve, who has been on the front lines in Ferguson for months, recently said, “When property damage upsets someone more than the taking of a life, that’s idolatry.” I hope that Jews in Baltimore and across our country will come together at this time to live the challenging teaching of this week’s Torah portion that we must not stand idly by the blood of our neighbors.

Why — and How — Baltimore Jews Must Act Now