To Win Next Time, the Israeli Left Needs To Return to the Tents 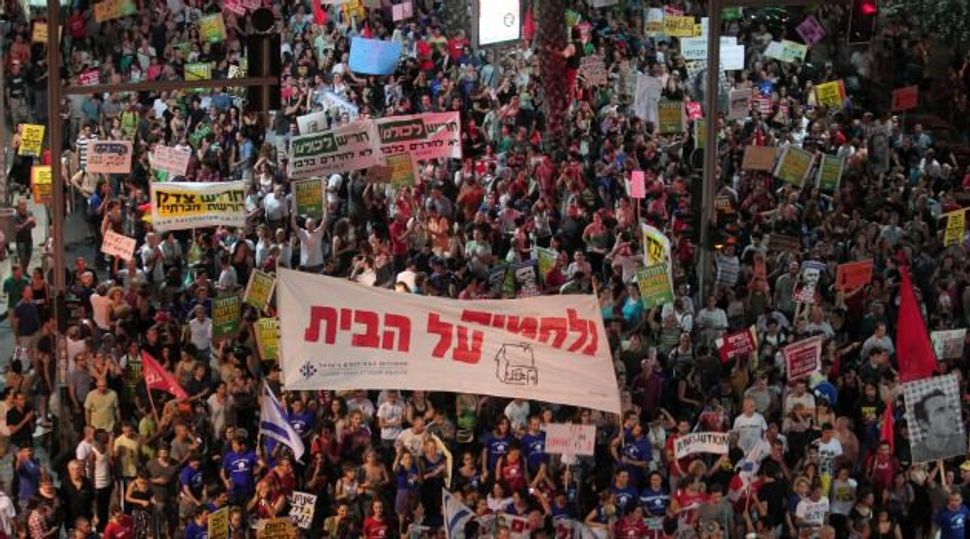 In the last Israeli election, this past March, the center-left had a plan. If only we could increase voter turnout among our traditional supporters we could win, said politicians and campaigners. This plan failed. As the results show, elections in Israel are not determined by the traditional supporters of the center- left, upper-middle class Jewish voters and the Arab population, but rather by the 50% of Israelis earning about $19,000 a year (the median income for a working individual in Israel).

The breakdown of the electoral groups tells this story well: While the center-left block won 70 Knesset seats in Tel Aviv (out of 120), the right got 93 in Jerusalem. While the upper-class voted center-left — 44% for the Zionist Union in Savyon, Israel’s wealthiest community — in Or Yehuda, a working class town across the road, the Likud won 40%. The Likud received 42% in Sderot and in Be’er Sheva, the capital of the south, 38% versus the Zionist Union’s 12%. Although no shift was noted between the blocks, with the gap between them remaining minor, the center-left did not win over a single seat from the right. The conclusion is clear: Without expanding its political base and building new constituencies, Israel’s progressive camp simply cannot win.

The key to the expansion of the center-left base, I believe, lies in the political potential of the social justice revival taking place in Israel since 2011. For over two decades now a Neoliberal economic policy has been changing the face of Israel. In fact it has turned the country into one of the four most unequal societies among OECD countries, the Western world’s leader in the percentage of outsourced workers and the developed country with the highest poverty rates. Israel’s strong public social services like education and health were partly privatized, public housing was demolished and the percentage of workers organized dropped from 70% to 24%.

The fact that this policy was shared by both the right and the majority of the left has blurred the difference between right and left, and created a political map that is irrelevant to the life of the majority of Israelis. But since 2011, after many years in which social issues were sidelined, Israel is going through a social revival. Over 100,000 workers have unionized since 2011, more than double than the number of those registered in the past two decades combined. Communities organize across issues like the water privatization and affordable housing. The minimum wage has been raised as a result of a public campaign led by the labor unions. The free public education act was adopted to include all children over the age of three, due to the demands raised by young parents who occupied the streets. Public support for a socially just economy is on the rise at the expense of the trickle-down model. And center-left parliament members are much more committed today to progressive economics than in the past.

But despite its tremendous achievements, the grassroots quiet revolution still hasn’t realized its political potential. Center-left politics is not rooted in workplaces and communities and is unable to expand its political base because it’s lacking a civic infrastructure. Therefore, the challenge for the center-left is to join the power of the social justice revival with the political game. In this way progressive Israelis would echo what the right started doing two decades ago.

The power of the right in Israel lies with its being a political camp — with think tanks, educational organizations, communities, seminaries, pre-army training programs and a well coordinated group of parties. The grassroots quiet revolution needs to learn from the success of the right and serve as the base of a countermovement to the one the ideological right has built. This cannot be viewed as a campaign goal, but rather as a long term project.

Until Netanyahu pulled the oldest trick in the book — incitement against Israeli Arabs, social issues dominated the public discourse during the elections. In order to counter this strategy and replace it with hope, the center-left must recreate bonds of social solidarity on the ground. Not dialogue circles or short term projects will build solidarity between Jews and Arabs and a true will to trust the other side and compromise, but rather joint struggles for common interests.

If the center-left camp and Israel supporters abroad want to repair the failure of the election, they need to quickly step out from despair and get back to work. Rather than commiserating over the demise of Liberal Zionism, a scenario which I — as a left wing Zionist — reject, we must learn our lessons and build a civil and political movement which will be rooted in the life of Israelis, reach new audiences and offer them a political alternative of social justice and peace. The foundations for such a movement exist and with the proper groundwork it could win.

Rami Hod is the Executive Director of the Social Economic Academy in Israel.

To Win Next Time, the Israeli Left Needs To Return to the Tents