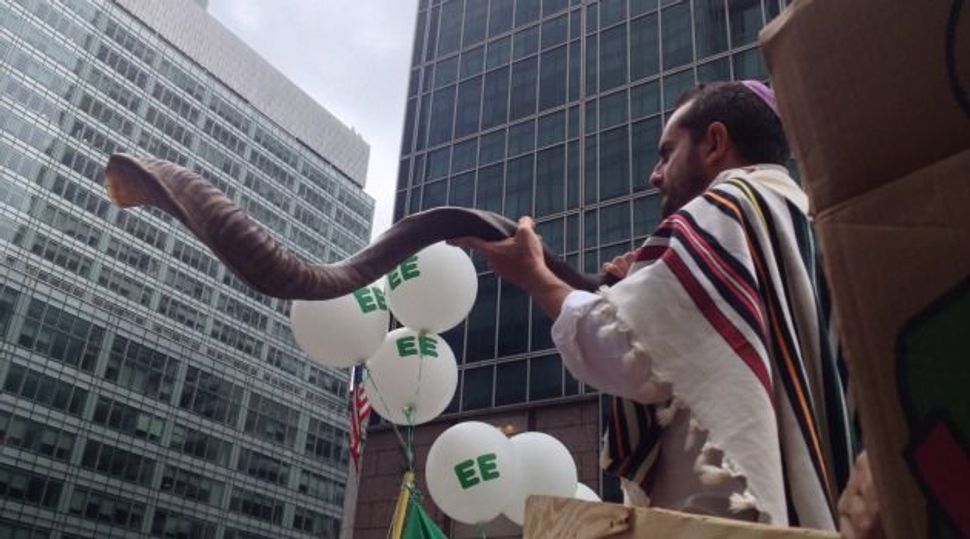 Three months ago, authoritative sources at the Vatican started saying that in June, Pope Francis would be issuing one of Catholicism’s most important statements — an Encyclical — on the climate crisis, and that in September, during his trip to the United States, he would speak to the United Nations General Assembly and to the U.S. Congress on the crucial need for action to prevent climate disaster.

Seven rabbis responded to this news by deciding that Jews should address the climate crisis in the nearest way analogous to an Encyclical: with a broad-based Rabbinic Letter.

“Why?” they asked each other. For three reasons: to bring unique Jewish wisdom to the worldwide efforts to heal the world from climate disruption; to remind the Jewish community itself that practical wisdom about the relationships between human beings and the earth is encoded in the Torah, and, especially, to connect with younger Jews who are deeply concerned about the damaged world they and their children may inherit, and who have had no idea that Judaism might speak to their strongest concern.

The seven of us reached out to the rabbinic community, and at this writing, 333 rabbis have signed the Rabbinic Letter.

Why was the pope — and why were the rabbis — so compelled to move now?

Because from November 30 to December 11 (six months from right now), the official governmental representatives of the entire human race will hold a crucial international conference in Paris to address the climate crisis.

The success or failure of that conference can make an enormous difference to the future of the human race and to the whole web of life upon our planet.

Can we prevent worldwide climate-spawned disasters? Can we turn our science and our moral wisdom toward shaping a world of shared, sustainable abundance — eco-social justice?

If past governmental behavior is any indication, the governments will probably get stuck in Paris — unless we, the peoples, insist on action.

What we do during the next six months will decide what happens in Paris.

So the 333 rabbis are focused on two kinds of action to take as we point toward Paris.

One we called Move Our Money/Protect Our Planet (MOM/POP): households and congregations could decide to purchase their electric power from wind

Can we turn our moral wisdom toward the problem of fixing the earth and insuring sustainability?

instead of coal; Jewish groups could shift their investments from lethal fossil-fuel production into life-giving enterprises; the citizenry could insist that our tax money stop subsidizing Big Oil and instead support renewable energy.

The other action: We suggested that every Jewish community assemble public citywide meetings this coming fall, pointing toward Paris to energize Jewish and multireligious responses to the climate crisis.

In these meetings, different approaches could be discussed and people could choose what to do so that the U.S. government take vigorous action in Paris, despite pressures from the Corporate Carbon Pharaohs that are bringing plagues upon our planet.

The 333 rabbis drew on a remarkable passage of the Torah to suggest that an auspicious time to do this will be October 4, the Sunday of Sukkot.

Partly because Sukkot is one of the most earth-conscious of our festivals.

And especially because this coming Sukkot is special.

The Torah (Deuteronomy 31:10-12) calls on us to assemble (in Hebrew, hak’heyl) the whole people to relearn together the heart of the Torah.

And it specifies that we should assemble this way in the Sukkot after a Sabbatical Shmita/Year of Release when the earth should be allowed to rest. This very year is a Sabbatical Year — so that means we could create hak’heyl this coming Sukkot.

So the ancient call for hak’heyl meets the most urgent moment of human history. For the Torah’s timing and the crunch of history to conspire — “breathe together”— in this way is uncanny. And powerful. We might even say, providential. But only if we respond.

Rabbi Arthur Waskow is the founder and director of The Shalom Center.