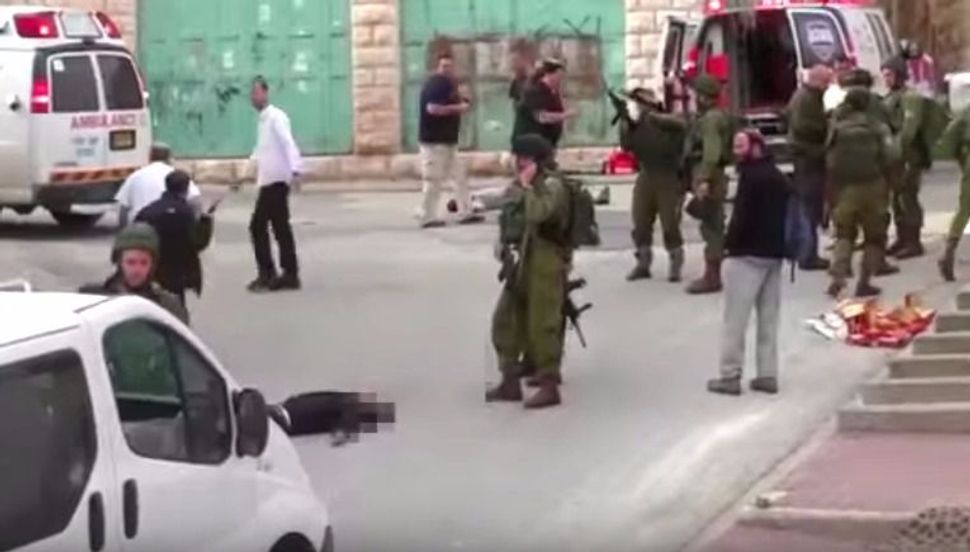 A still from one of the videos of the shooting. Image by YouTube

Israelis were apparently scandalized this past week by a video showing an IDF soldier in Hebron shooting a wounded, incapacitated and unmoving Palestinian who had, a few minutes earlier, attacked another soldier with a knife, wounding him.

The video that surfaced on Thursday was taken by a volunteer with the Israeli human rights group B’Tselem. It shows one of two attackers lying motionless (reports later said the two had been still for about six minutes), while a number of soldiers, medics and others move about, getting the first wounded soldier into an ambulance. They don’t seem concerned with the wounded attackers anymore. Then one soldier is seen calmly preparing his automatic weapon, walking over, and shooting the Palestinian in the head.

Within hours, a senior IDF spokesperson told Israeli news channels that “this goes against the values of the IDF.” Both Israel’s Defense Minister and the Chief of Staff of the IDF spoke out against what happened, as did Prime Minister Benjamin Netanyahu himself, , “What happened in Hebron does not represent the values of the Israel Defense Forces.” On Friday the soldier was arrested and is being investigated for possible murder.

But if international audiences won’t be convinced by these condemnations, as the foreign affairs editor of Israel’s Channel 2 News speculated, it’s not clear why Israelis would be.

The soldier is responsible for his action as an individual. But there is also a whole political and social environment — top-down and bottom-up in a feedback loop — nurturing just this situation.

Top members of Israel’s political, religious and security establishment have spoken out regularly in favor of killing attackers on the spot, prior to the wave of violence that began last fall. That thinking easily extends to attackers who pose little threat at the moment.

In 2011 a former chief rabbi of the IDF said that terrorists could be “killed in their beds,” instead of arrested, or should be “killed in the field” during an attack: “It doesn’t need to reach court.” In 2014 then-Minister of Internal Security Yitzhak Aharonovich said that he would like every incident to end that way: “The fate of a terrorist is to be killed.” Defense Minister Moshe Yaalon responded, “Every terrorist, if he raises a hand either with a knife or a vehicle or firearms, his fate should be death, in accordance with the circumstances.”

Last October, Rabbi Shmuel Eliyahu of Safed, a member of Israel’s Chief Rabbinate Council, said that a soldier who leaves a terrorist alive after an attack ought to be prosecuted himself. The far-right politician Avigdor Lieberman ran his recent election campaign on the idea of “death penalty for terrorists.” The current Internal Security Minister Gilad Erdan and opposition figure Yair Lapid have both supported the goal of killing terrorists on the spot, not capturing or prosecuting them.

When the IDF Chief of Staff said in February that he does not want soldiers emptying cartridges on 13-year old girls wielding scissors, referring to another grim event, his comments sparked a vicious backlash from Israel’s right wing.

That legitimization from the top explains, and feeds, the Israeli public’s feelings. Last November, three-quarters of Israelis said in a survey for Israel’s Channel 2 that they believe terrorists should be killed on the spot. Nearly 80% also said civilians should not kill terrorists that have already been incapacitated (after citizens killed an innocent Eritrean migrant during an attack, believing him to be a terrorist), but a 55% majority said such civilians should not be prosecuted.

Those findings explain why the Hebron soldier’s father said his son had acted just as he had been taught in the army and a right-wing parliamentarian said he should get a prize, while Israel’s education minister decreed on Facebook: “He is not a murderer.” The earlier surveys set the stage for the current public mood: Channel 2 reported on a social media analysis showing that 87% of conversations there favored the soldier and 37,000 people signed a petition defending him. A regular survey for Channel 2 representing the whole Israeli public showed that 57% were against his arrest and 66% said his actions were a natural or even a responsible reaction (the question cited the possibility that he had a suicide vest). Most surprisingly, over two thirds opposed the condemnations issued by their own (right-wing) prime minister, defense minister and chief of staff.

The incident calls to mind the “Bus 300” affair. In 1984, two terrorists who had hijacked a civilian bus were photographed being led away by security forces, alive and bound. They turned up dead and the photographs caused a scandal. The difference is that back then, the killings and the Shin Bet’s attempt to cover up the affair rocked the country.

Now, Israelis mainly fear the viral path of the footage more than the killing itself. At best, they cling to the “bad egg” theory. Anyone who questions the policy that led to the whole sorry confrontation is quickly smacked down with the argument that when people are getting stabbed in the streets, it’s no time to raise larger policy issues. It’s never the time.

If a society constantly tells itself to ensure that terrorists die rather than get hauled in, that is what soldiers will aim for — literally — even when the attacker is down. Israel can throw the book at this soldier. Maybe he’ll even sit behind bars. But there will be more like him until we’re ready to change policy, instead of praying no one videotapes the next bad egg.

Dahlia Scheindlin is a public opinion expert and political consultant, and a regular writer at +972 Magazine. She holds a doctorate in political science and lives in Tel Aviv.