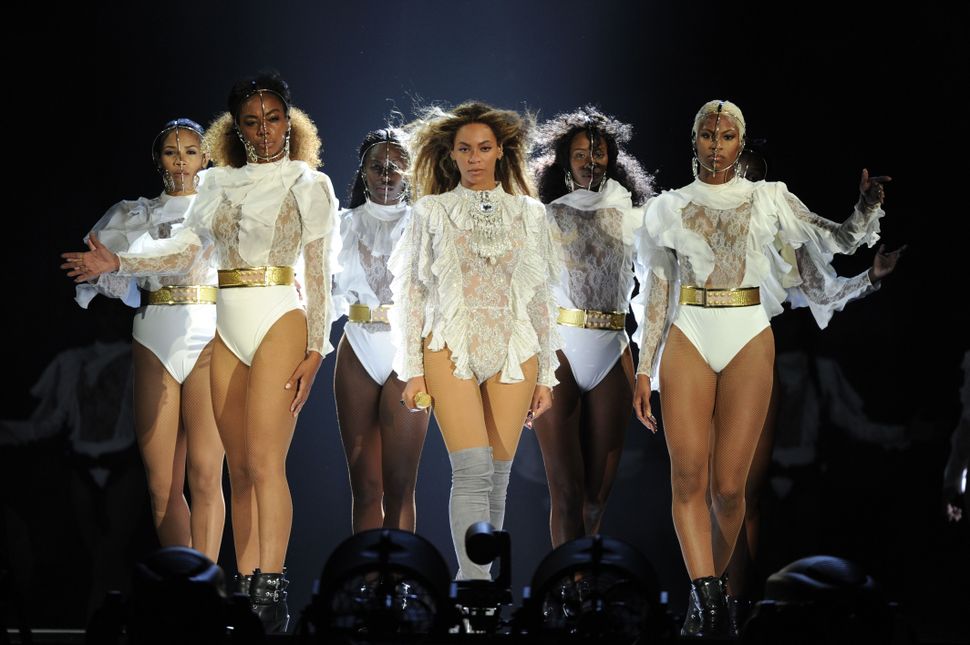 Some of the most compelling popular art of the past year has come not only from an African-American perspective, but also from a relatively confrontational one — in the best sense. I’m thinking here of Kendrick Lamar’s “To Pimp a Butterfly,” Ta-Nehisi Coates’s masterful “Between the World and Me,” Beyonce’s “Formation” video, and now the long-form video and the audio album “Lemonade” to which it is appended, as well as more elliptical but affiliated works, like jazz saxophonist Kamasi Washington’s work of genius, “The Epic.”

As a white American Jew, I’ve struggled at times with the question of how to relate to these and many other outstanding cultural artifacts without exploiting, exoticizing or appropriating them. There is, alas, a long and sorry history of American Jews doing just that. Predominantly Jewish managers, agents and producers taking advantage of African-American artists, musicians and writers. White, suburban Jews exoticizing “the ghetto” or “gangsta” rap or urban black modes of speech, affecting a kind of faux-black pose without recognizing how they are appropriating another culture, or how their own privilege is part of the net of economic injustice and racism. Jews and other white Americans (not all Jews are white, of course, but here I want to speak from my position of one who is) affecting the styles of hip-hop, reggae or other art forms, but divorcing them from their political contexts.

There has also recently been a conservative backlash against art that is animated by Black Lives Matter and other justice movements. Maybe it was no big deal when Lamar rapped about it — hip-hop, after all — but Beyonce? Currently No. 1 on the pop charts, widely regarded as a cultural genius — and yet, defiantly political and sharply intelligent. There was a funny/not-funny “Saturday Night Live” sketch recently about horrified white people “discovering” that Beyonce is black. By which we mean, of course, politically black, singing openly about racism and using imagery in the “Formation” video that calls to mind the Bush administration’s callous indifference in the wake of Hurricane Katrina, confrontations (riots?) with the police and other deliberately incendiary images.

“Incendiary” is indeed the word; it’s been over half a century since James Baldwin wrote “The Fire Next Time,” but if you can’t see that urban communities are a tinderbox right now, ready to erupt at the next outrage (Baltimore, Ferguson, the list goes on and on), you haven’t been paying attention.

I don’t want to short-shrift the sheer musicality of these records, or the brilliance of these books; they are not political tracts, but great works of popular culture. Yet I don’t want to ignore their political contexts either.

In fact, what’s moved me the most, particularly in Lamar’s, Coates’s and Beyonce’s work, has been the interweaving of the personal and the political. These are stories, not tracts — and they all make me want to dance, including Coates’s prose, which filled me with envy and admiration. Famously, for example, Beyonce’s “Lemonade” album is, in part, about Jay Z’s infidelity and the possibility (or not) of forgiveness. But it, and even more so the accompanying video album (which should be on your must-see list), sets this domestic disturbance in the context of legacies of white supremacy, misogyny and injustice. The “lemons” Beyonce’s grandmother used to make lemonade out of aren’t just cheating husbands, it’s the whole interwoven basket of violence, marginalization and disempowerment.

This is not to pass the buck from Jay Z to structural racism — Beyonce never does that. But it is to situate one within the other. Just as my privileged background — stable family, suburban safety — is in large part responsible for whatever success I’ve had, so, too, Shawn Carter’s background has shaped, informed and contributed to both his stunning success and his shortcomings.

We all know this, right? It’s why we want to send our kids to good schools, to educate them Jewishly if that’s important, to give them love and support and discipline and structure. So how is it possible that right-wing pundits like Bill O’Reilly and Rush Limbaugh can get on national media and deny that white privilege exists? Really? Nothing?

We know this specifically as Jews, too. My grandparents came from Eastern Europe with nothing. Thanks to hard work, a supportive community and the postwar economic boom, my grandfather achieved the American dream and passed on to us a financial as well as cultural legacy.

And yet, my grandmother still saved half-used Sweet’N Low packets from the restaurant; she still conformed, at times, to the Jewish mother who will suffer in silence rather than disturb her relatives. How many Jewish mothers does it take to change a light bulb again? “None, dahling, I’ll sit in the dark.”

These habits were mostly harmless remnants — but they were remnants of a childhood of privation. There were more serious echoes, too. Both of my grandparents lost siblings, aunts, uncles and cousins to the Nazis and their collaborators. We all know that this trauma resounds for generations.

And yet, conservatives tell us that people like Coates are “playing the race card” or adopting a “victim mentality.” As if conservatives haven’t played the race card for 300 years, first enslaving African Americans, then placing them under the yoke of Jim Crow, then segregating them in redlined housing districts, and vilifying them on to the present day, with its epidemic of violence, widespread Republican voter suppression efforts, and shredding of the social safety net.

Is it “playing the race card” to tell it like it is? Are Jews playing the “religion card” when we visit Yad Vashem?

We (white) Jews know, too, that racism resonates in our own community. I remember hearing as a child that other minorities (ours, Asians, etc.) “passed over the blacks” on the race to the top; that anti-Semitism held us back, but we never let it define us; that violence in the inner cities had something to do with the nature of people of color. For heaven’s sake, Charles Murray, who “discovered” that white Ashkenazi Jews are the smartest people on the planet (guess who are the dumbest), is still a respected libertarian conservative commentator and fellow at the Koch-network-funded American Enterprise Institute.

So when I read Coates’s memoir, I feel fortunate to be able to hear his voice, telling me how he saw the white-picket-fence life of white Americans as a far-off “dream,” how black men are not really the owners of their own bodies, how they can — in an instant — be caught in the dark underbelly of the American Dream, even today. I feel chastened, not out of a sense of “white guilt” (itself part of the overall pathology), but as someone whose eyes have been opened, like the prophet Balaam, who thinks he knows everything, but is actually dumber than an ass.

How many Balaams, I wonder, sit in positions of power in our community?

I am convinced that these African-American voices, and many others I have not mentioned, are some of the most vital of our cultural moment, particularly as we head into an election season with open xenophobia as part of our public discourse. And I want to hear these prophetic voices as precisely other than my own, because they speak from conditions different from our own.

Of course, there are ties that bind across communities. But I don’t want to pretend to be somehow black by consuming this art, even in solidarity, and I don’t want to fetishize the art of the Other, or make it exotic, or appropriate it, or speak for it, or detach it from its wider cultural context.

On the contrary, I want to see that there are crucial ways in which my experience differs from these artists’, and that makes me prick up my ears and listen. Just as within the Jewish community, where I want to hear marginalized voices for their wisdom, their wit and their calls to social justice, I want to pay attention. I don’t need to agree with everything that’s said, but I do think I need, and want, to hear it.

Thanks to our success, American Jews have a choice. We can now assimilate into the ruling class, more or less; we’ve got ours, and who cares where we came from. Or we can remember our roots, ancient and modern, and listen to the voices that tell us things that we may not want to hear, but that make us more human for hearing them.