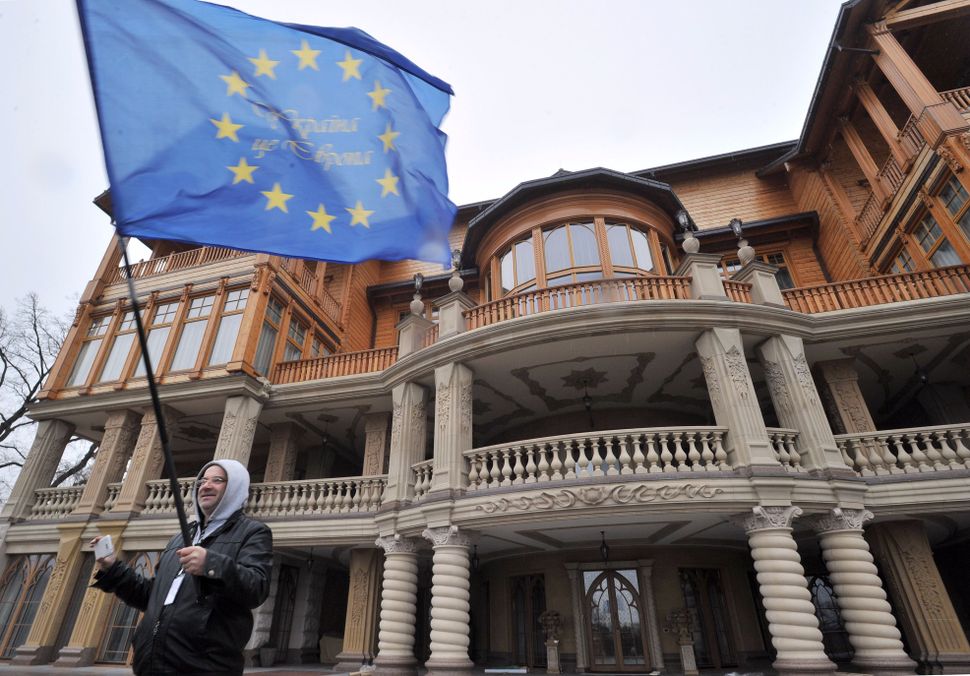 The European Union is going through some tough times. Next month, Great Britain, which from the beginning has had one foot out of the European project by not signing on to the European currency or the Schengen Agreement (a treaty that abolished many of the E.U.’s internal borders), will vote on whether to divest from the E.U. completely.

Last month, in a move that pit Jew against Jew, Dutch voters defeated a trade agreement between Ukraine and the E.U.; according to JTA, a delegation of Jews from Ukraine lobbied hard for European integration, but Dutch Jewish leaders felt Ukraine was still too anti-Semitic to gain entry.

Dutch Jews might be right that Ukraine is still tainted by fascism, which finds homes in parties like Svoboda and Right Sector, but that’s all the more reason that Ukrainian Jews should have access to the E.U., and not be left alone to deal with that reality themselves. The fact is, if the choice is between maintaining provincial nationalism and establishing transnational governance, the latter, no matter how flawed, is always the better option.

Criticism of the pan-European project ranges from the legitimate to the petty to the dangerous impulse to return to the state of affairs that gave us two world wars and the Holocaust. For the left, the European project has wrongly put poorer nations like Greece and Spain at the mercy of northern European industrial powerhouses like Germany. “Ironic” is hardly a strong enough word for that situation.

The British impulse to step out of the E.U. stems from frustration with burdensome E.U. regulations and, more troubling, from a fear of new immigration. There’s no denying that Euro-skepticism has come a great deal from the right, especially from far-right nationalist parties that thrive on fear and hatred of non-European migrants (particularly Muslims), as France’s Front National does. To make matters worse, these groups have found an ally in Russia’s Vladimir Putin.

Brussels, the seat of the European government, may have its problems. But the cold governance of Brussels would still be a far easier pill to swallow than a network of racist thugs bankrolled by the Russian oligarchs.

The best argument for this is probably Hungary, where the reign of conservative Prime Minister Viktor Orbán and the rise of the anti-Semitic far-right party Jobbik have led to attacks on minorities and on the free press, on a scale that is not fit for an enlightened democracy. This situation has forced E.U. intervention on several occasions; last year, for example, E.U. parliamentarians warned the nation after it signaled that it would bring back the death penalty.

In a 2014 paper, academic Bojan Bugarič said, “Even if the existence of the E.U. makes the danger of rising illiberalism less dramatic, there are still reasons to be worried about the authoritarian illiberal attacks on liberal democracy. As the Hungarian case shows, the E.U. has quite limited powers to effectively prevent the slide to authoritarianism… Yet, the discussion of the E.U. instruments to contain such slides into illiberalism has also shown that they are not totally unimportant and that they can be further improved.”

This is a case for strengthening the apparatus of liberal governance, not for dissolving the bonds. One can think of few Jewish voices (or Roma voices, or any liberal voices, for that matter) advocating for either leaving Hungary to its own devices or letting it drift into Putin’s sphere of influence.

It couldn’t be stranger timing, then, that the British right, both in the Conservative Party and the right wing of the Labour Party, have used charges of softness on anti-Semitism within Jeremy Corbyn’s own party against him. The former London mayor Ken Livingstone may have had some bone-headed things to say about anti-Jewish bigotry (it’s apparently not really a form of racism, according to “Red Ken”), but the much bigger threat to Europe’s minorities rests in the impulse to return to nationalism, to look inward rather than outward, to fear immigration and multiculturalism.

The obvious response to this thinking is to point to the E.U.’s flaws, such as the ongoing suffering of refugees fleeing violence. Or, one could invoke the heartlessness of the German finance minister Wolfgang Schäuble during the creditors’ showdown with Greece, which has imposed even more economic hardship on an already suffering population.

These are all fair points, but once again, the solution is to make the E.U.’s policy more favorable to multiculturalism and migration, and to spreading wealth rather than giving banking and industrial titans the ability to dictate terms to the poorer countries. Besides, although the creation of the single currency might look like a bad idea in hindsight, undoing it humanely seems next to impossible.

That seems to be what that delegation of Ukrainian Jews was trying to tell the West last month. They came close to selling their case. Perhaps they’ll try harder next time.