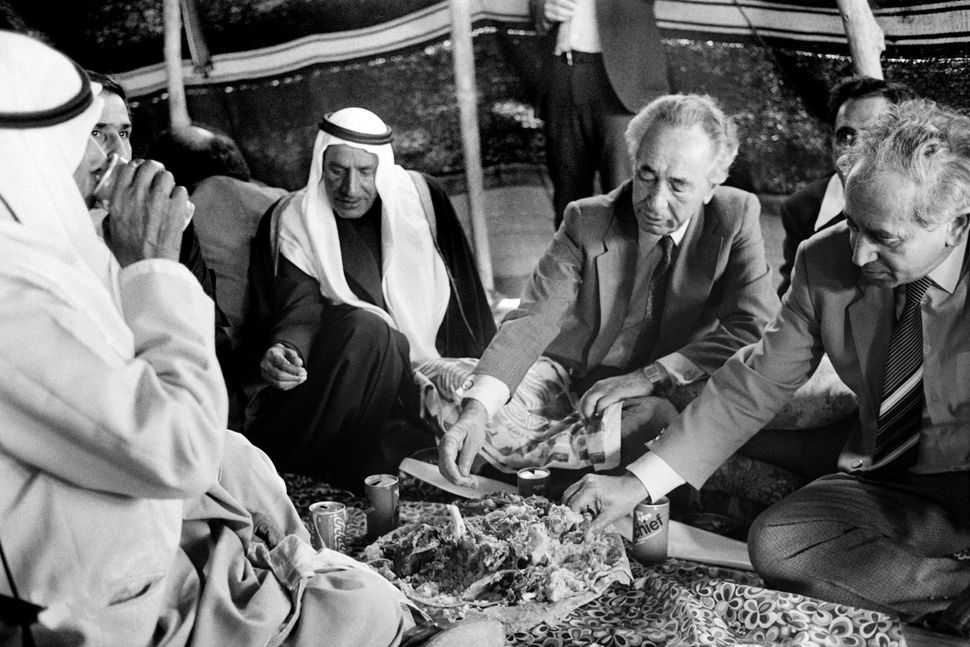 Rarely in history has a man been so identified with the life of his nation for so many decades and at so many critical junctures as Shimon Peres was. Peres’s legacy encompasses vision and practice, policy and authorship, statesmanship and politics.

I remember how, in 1993, once the Oslo Declaration of Principles was signed between Israel and the Palestine Liberation Organization, the parties needed to get their act together and establish a realistic relationship. There would be no more glowing ceremonies, but rather a challenging, wearying, detailed, edgy negotiation process that started in late 1994 and continued throughout the end of September 1995, with the signing of the Israeli-Palestinian Interim agreement (“Oslo B”).

Prime Minister Rabin assigned Peres for the job. The two overcame bitter past animosities and worked hand in hand to resolve the intractable conflict with the Palestinians. Peres led the talks, reporting personally to Rabin on a regular basis several times a day, getting his approval for precedential decisions, discussing the issues at hand and then getting back to the negotiations.

I remember Peres sitting in front of Yasser Arafat in Taba in August 1995, long past midnight, after an exceptionally (though typically) heated exchange between the two on a loaded topic. “Mr. Chairman,” he told the PLO leader, “as much as I am convinced you are totally wrong, I would still rather sit here negotiating with you for five more days and nights than have Israelis and Palestinians shoot bullets for five minutes.”

After the failure of the Camp David summit in July 2000 and the subsequent breakout of the Palestinian Al Aqsa Intifada in late September, amidst the bloodshed of hostilities, Peres asked Prime Minister Barak to meet with Arafat. Barak agreed, hoping to obtain a glimpse of hope for a return to normalcy, capitalizing on the influence Peres might have on Arafat. Lea Rabin, Rabin’s widow, who was on her deathbed at the time, gave her blessing.

I drove with Peres and his confidante and aid Avi Gil to Gaza the following evening. We found a nervous, jumpy and irritated PLO chairman. Peres did his best to calm him down and the two parted from their respective parties for a two-hour tête-à-tête. Needless to say, nothing agreed on or committed to by Arafat during that meeting ever got implemented. Driving back from Gaza late at night on our way to the Prime Minister’s Office to report and debrief, our little convoy passed through rather close shooting of machine guns and mortars. Peres did not pay any attention: He was concentrating on the next steps ahead.

In advance of the laying out of President Bill Clinton’s parameters for peace, Barak established a consulting “peace cabinet,” comprising a few members of Knesset, a number of ministers and the national security advisor. Peres was the leading moderate voice. Addressing the challenging dilemma of maintaining a negotiation process while fighting Palestinian terror and violence, his persistent stance was in favor of proceeding simultaneously with both.

Years later, in November 2005, three months after the unilateral disengagement from Gaza, Prime Minister Ariel Sharon left his Likud party and established Kadima. A week later, Peres joined him as number two in the newly established party, leaving the Labor Party after a jubilee. Political analysts saw this step as analogous to Moshe Dayan’s 1977 recruitment to government by Prime Minister Menachem Begin. The newly elected premier sought to solidify a moderate ministerial coalition, which, in fact, led to the signing of the Israeli-Egyptian peace treaty.

It was therefore only natural that in 2011 the principals of our movement, Blue White Future, and the Israeli Initiative for Peace sought the support of by-then-President Peres. Never refusing a meeting with civil society protagonists of Israeli-Palestinian and regional peace, Peres demonstrated proficiency in the political platform of the groups.

Peres’s outstanding vision integrated a broad outlook on peace. He never wearied of advocating for the societal, civilian and national benefits of peace and the necessity of attracting youth to it. Understanding the intertwined nature of peace and security, and intent on securing Israel as a Jewish democracy, he strived for the two-state-for-two-peoples solution to the last day of his life. This is his testament.

Gilead Sher, an attorney and former Israeli senior peace negotiator and Chief of Staff to Prime Minister Ehud Barak, heads the Center for Applied Negotiations at the Institute for National Security Studies, in Tel Aviv. He is a co-founder of the Israeli non-partisan organization Blue White Future, which advocates for a two-state solution. Sher is currently a lecturer and visiting scholar at Harvard Law School.