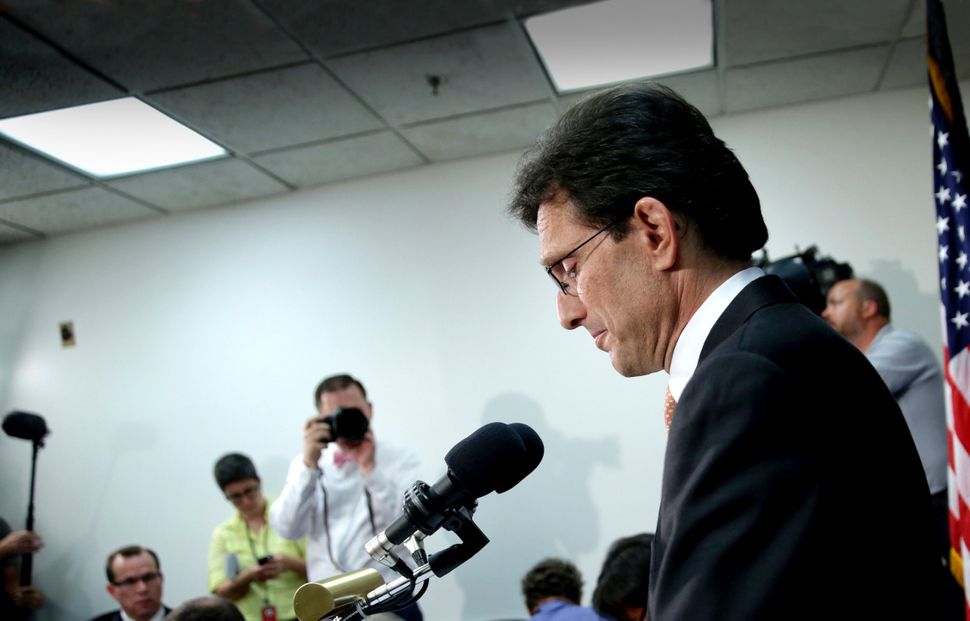 With a landslide presidential victory likely in just a few days, Democrats are quickly turning their attention to the thorny question of how a Hillary Clinton administration might advance an agenda in the face of an obstructionist, Republican-run Congress.

Polling analysts give Democrats good odds — better than 2–1 — of retaking the Senate, albeit by margins slim and hardly filibuster-proof. However, most major legislative actions require approval by both the Senate and House of Representatives, except for a few Senate-specific functions like confirming federal judges. As for the House, it seems almost certain to remain Republican, barring a miracle. The forecast is four more years of Washington paralysis.

The prospect has Democrats sufficiently alarmed that President Obama reportedly intends to spend much of the next few years on a new initiative to break the Republicans’ lock on the House. The initiative, the National Democratic Redistricting Committee, is to be chaired by Obama’s former attorney general, Eric Holder, and managed by the current head of the Democratic Governors Association, Elisabeth Pearson. The initiative was first reported in Politico on October 17.

The reason for the GOP’s House hammerlock is a little-understood strategy to win control of state legislatures. That’s where individual House district maps are drawn. The maps are redrawn every 10 years, in a process known as redistricting, to reflect population shifts as shown in the latest census. The Constitution requires each House member to represent roughly the same number of residents. That’s currently about 700,000 per lawmaker.

Redistricting has been rife with skullduggery since the dawn of the Republic as parties have vied to create districts favoring their own candidates.

Since the 1990 census, however, Republicans have elevated it to a high art, combining detailed polling, Census and marketing data, along with social media, advanced computer tech and some surprising coalition building.

Given the Democrats’ growing demographic advantage in presidential elections, the prospect of an unbreakable GOP hold on the House suggests divided government as far as the eye can see. Theoretically, that might mean moderation and compromise as sides are forced to coexist.

The actual result is paralysis. That’s partly a product of redistricting itself. Republican incumbents running in hardcore GOP districts don’t fear challenges from Democrats. Rather, they fear primary challenges from their right. That threat pushes the entire House GOP delegation inexorably rightward.

This year’s Donald Trump candidacy showed how the GOP is a victim of its own success. The party eliminated left-right competition, drove home districts rightward and inflamed the base over its representatives’ failure to deliver promised change. This year the base bit back.

The Republicans’ House districting strategy was based on a provision of the 1965 Voting Rights Act. It favored creating congressional districts where racial minorities were a majority, thereby increasing the odds of electing minorities to office.

A group of GOP activists, led by Georgia Rep. Newt Gingrich and superlawyer Ben Ginsberg, reached out to African-American Democrats in several state legislatures in 1991 to propose a deal. Working together, they could redraw clusters of existing districts with minority black populations, combining black voters into consolidated majority-minority districts where a black House candidate could easily win. The process would leave adjoining districts more white and more Republican.

Beyond Democrats and Republican moderates, there’s yet another group that’s hurt by Republican redistricting: Jewish political leadership. This is because Jews were disproportionately represented among the Democratic lawmakers holding seats in the urban-suburban districts that the GOP unraveled. Of 54 Democrats who lost their seats in the 1994 Republican sweep, nine were Jewish. Overall, Jewish House membership has now declined to 19 from 33 in 1990.

One of the first Democrats to warn about the emerging GOP strategy was Martin Frost, a Jewish House member from Fort Worth, Texas, who went on to become a senior figure in the House Democratic leadership and the head of Democrats’ House campaign efforts. As he explained it to me in a 1991 interview, many metropolitan regions were districted in a sort of pie-chart pattern with districts stretching outward from center city to nearby suburb. Each combined black and white populations to create a Democratic majority. The Republican plan was to create a “bull’s eye” map, with a black district at the center and white Republicans in the suburbs.

Frost was prescient. The 1994 House elections saw 54 Democrats lose their seats to Republican challengers. The GOP won the House for the first time in 40 years. Gingrich became speaker. Most observers then and since blamed the turnover on popular dissatisfaction with President Clinton’s first term, particularly first lady Hillary Clinton’s failed health care reform. That was surely a factor. But Frost insisted other factors were at work. And he predicted more upsets ahead.

The Republican plan works only once in 20 years, when the census coincides with a midterm, nonpresidential election. Democrats have a sharp disadvantage in midterms. The stakes seem lower, and interest declines. “As a general proposition, Republicans do better in midterms than in presidential years,” Frost, now a Washington lawyer, said in a recent interview. “In most midterms the electorate is older and whiter, and that favors Republicans.”

The gap is stark. In 2008, a presidential year, 69.5 million Democrats voted for Barack Obama, while 60 million Republicans voted for John McCain. Two years later, in 2010, 39 million Democrats turned out to vote for Democratic House members, a drop-off of 30 million, while 44.7 million voted Republican, a 15 million decline. The same thing happened between 2012 and 2014: The Democratic drop-off was double the Republican.

The 1990 election was a midterm. Republicans used the redistricting process to mobilize the 1994 House upset. The next Census, in 2000, came in a presidential year. The next, in 2010, was a midterm. Republicans were ready. This time the campaign was even more organized. Technologies and data were far more sophisticated. In early 2010, Republican operatives in Washington set up a new operation called REDMAP, for Redistricting Majority Project, aimed at taking over state legislatures in advance of the 2010 Census results that would be released in 2011.

Sure enough, the 2010 congressional elections saw a Democratic rout that outstripped 1994, with 61 House seats turning red. As in 1994, the Republican sweep was widely attributed to anger over health care reform. Once again, that was part of the story but not the whole story.

Bottom line, Democrats can’t hope to counter the Republicans’ advantage in state legislatures and congressional districting — not to mention congressional comity — until they address their midterm turnout problem. Those midterms determine who’s going to draw the maps that determine Congress. If Democrats can’t get their voters to turn out when it really counts, all their growing demographic advantage in presidential years won’t save them. They’ll be mired in Washington paralysis for decades.