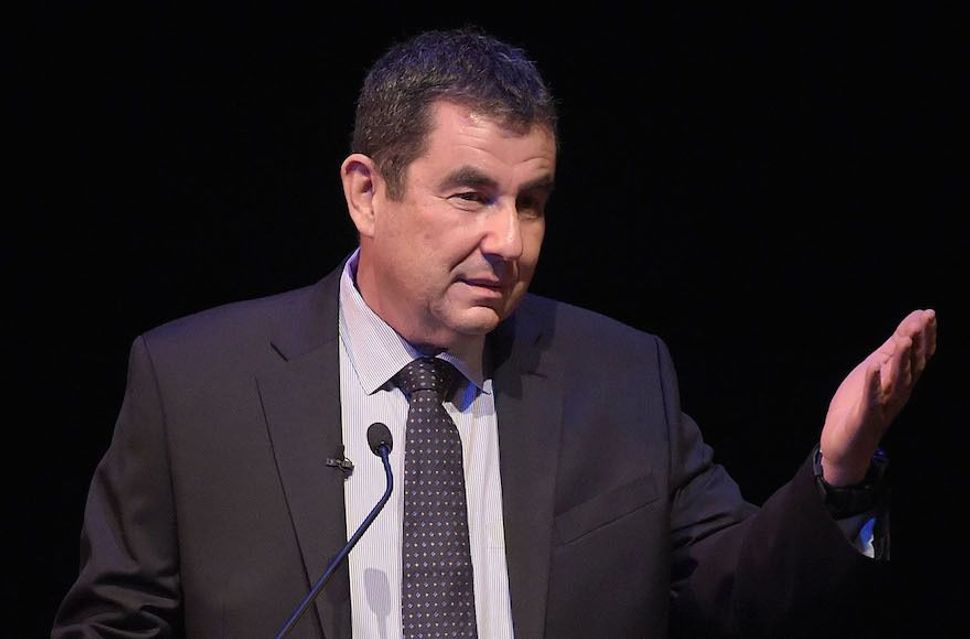 As writer Danielle Berrin published her illuminating piece last week on how an “accomplished journalist from Israel” sexually assaulted her, my first thought was naturally one of disgust. In the wake of the innumerable assault claims that have piled up against Donald Trump, it was another sobering reminder of the sexism and harassment that women continually face in every industry (not just Trump’s plastic world of lavish wealth and reality television).

My second thought was a futile one: Don’t let this be Ari Shavit.

Shavit, the prominent Haaretz columnist and author of the widely praised liberal Zionist treatise “My Promised Land,” has since admitted to having a “misunderstanding” with Berrin in February 2014. If Berrin’s account is true — and there’s no reason at this point to think it isn’t, since Shavit did not deny any of her allegations — Shavit lurched at her and grabbed the back of her head during an interview with her at his hotel during his “My Promised Land” book tour. He called it “courtship”; she called it sexual assault.

The outrage against him has been swift and damning.

The least @haaretzcom should do is suspend him until further notice. Every second that isn’t happening is a disgrace https://t.co/yLYFLNhRKq

Berrin did not name her assaulter in the piece, saying she wanted to keep the focus on the issue, not the perpetrator. “My story about sexual assault is not about a person; it’s about an issue,” she Tweeted. “To treat it otherwise is to miss the point entirely.”

My story about sexual assault is not about a person; it’s about an issue. To treat it otherwise is to miss the point entirely.

But most of the Jewish and Israeli world suspected it had to be Shavit, “an accomplished journalist from Israel” with a widely reviewed book who appeared in Los Angeles during a book tour and matched her description of a married man with “dark eyes” and “black hair.”

Even though I racked my brain for other possibilities, I knew the inevitable was coming: Ari Shavit was going to join the long list of prominent men rightfully ruined by their violent, immoral behavior.

A lament for an older male from a young white male might sound like anathema at the moment, even if this is the opposite of a defense of Ari Shavit. But it is worth noting that this fall from grace should be particularly troubling for the Jewish community: It’s the demise of an Israeli writer whose impact on American Jewish liberals was profound.

Like so many other readers, I was captivated by “My Promised Land,” which combined Shavit’s reporting with a history of Israel’s dilemmas from before its founding to the rise of a near-nuclear Iran. When friends asked for recommended reading on the Israeli-Palestinian conflict, I suggested it. If someone asked for a good primer on basic Israeli history, I suggested it. When someone slammed Israel’s occupation or conversely argued that Israel is morally infallible, I suggested it.

The book itself is not perfect by any means and can at times feel long-winded or excessively pessimistic. Nevertheless, it has strongly influenced how I view Israel, its complicated relationship with its neighbors and its many challenges and triumphs.

Shavit’s work paints a timeline of Israel from the earliest Zionist efforts (his own great-grandfather Herbert Bentwich was a founding Zionist voice) to modern military conflicts. Each chapter examines a specific aspect of Israeli society over time or a group of specific political figures, whose ideas are revealed in unusually long, illustrative quotes.

Leon Wieseltier called it “important and powerful.” Simon Schama said it “makes you believe anything is possible.” Thomas Friedman recommended that Barack Obama and Benjamin Netanyahu read it over and talk about it together. It was the rare work that united a broad section of American Jews in the conversation on Israel: Here’s the real Israel, it seemed to say, neither the idealized Jewish utopia of the hard right nor the criminal colonial state of the far left.

For liberal Zionists, it managed to address their concerns about current Israeli policy while affirming their pride in the establishment and accomplishments of the Jewish state.

However, while the book seems comprehensive , activist Rabbi Jill Jacobs and others have pointed out an extremely pertinent flaw in it: The figures Shavit interviews — from Yossi Sarid to Aryeh Deri — are almost exclusively men. They rightly point out that the history of Israel, one of the world’s most progressive states, is not complete without a history of its women.

And it’s not too surprising that someone who wrote women out of his history of Israel might not see their perspective in real life.

Of course, the flaws found in a writer’s work don’t necessarily shed light on his private life. And it is not unheard of for a writer who deals sensitively with gender or race in his books to be a sleaze in his personal relationships.

But putting any of Shavit’s motives or biases aside, he has not denied the actions that led a woman to accuse him, convincingly, of sexual assault. And the flaws of the messenger can’t help but taint the message.

So one thing is for sure: I won’t be recommending his work anytime soon.