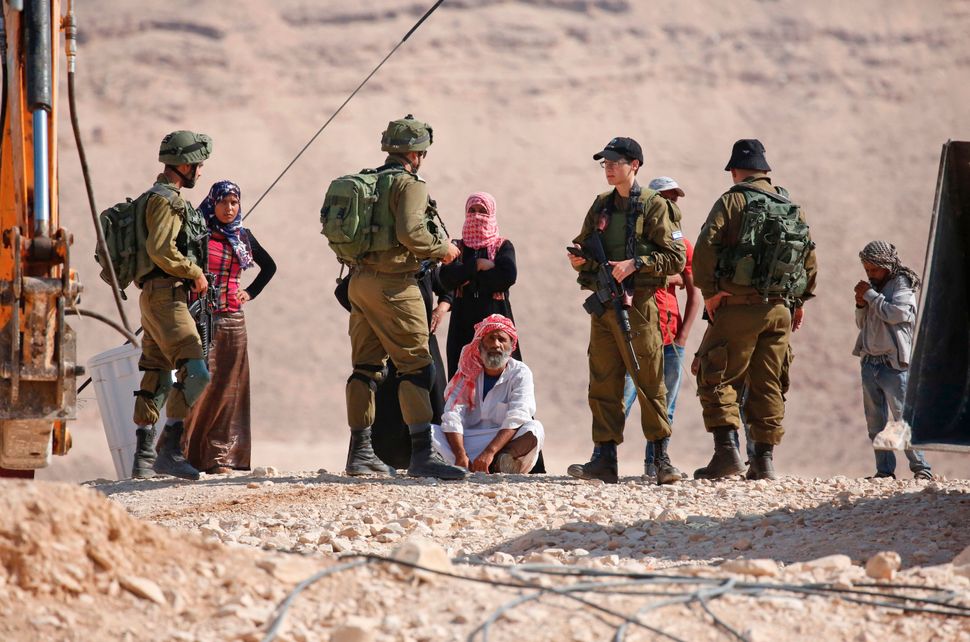 A recent story in Haaretz about Bedouins being stripped of their Israeli citizenship shocked readers. It seemed to confirm the worst suspicions about Israel and Zionism more generally, and at a time when it is disturbingly fashionable to equate Zionism as racism, the story could not be more relevant. Indeed, the story of the Bedouins gets to the heart of some of the biggest issues Israel faces today, and it is the very soul of Zionism that hangs in the balance.

To make this case, I want to go back in time to October 11, 2015, when Alaa Raed Ahmad Zayoud, an Israeli citizen, committed a grave crime against his state. Near the entrance to Kibbutz Gan Shmuel, outside Hadera, the 20-year-old Zayoud rammed his car into a soldier. Zayoud then got out of his car and stabbed a second soldier, a 15-year-old girl, and a 45-year-old man. Thankfully, no one was killed.

After initially claiming innocence, Zayoud eventually admitted a motive: He wanted to kill himself by killing Jews.

Zayoud’s crime was heinous and without any justification, and Israel ought to have punished him according to his transgressions. But Haifa District Court Judge Avraham Elyakim went further than that. In an unprecedented decision, he ruled that Zayoud had forfeited his Israeli citizenship by his actions.

In other words, Judge Elyakim accepted Zayoud’s interpretation of his own crime, and construed it as Zayoud’s attempt to remove himself from the body politic. The judge then stamped his approval on this self-exclusion, and ordered Zayoud to be stripped of his citizenship, rendering him stateless.

This was a crucial error, and one that strikes at the heart of the Zionist dream. The Jewish state was instituted as a nation of all its citizens, Jew and non-Jew alike. It must therefore incorporate not only the saintly ideal citizen but also its criminals, malcontents, and dissidents. Citizenship after all is a right, and is not dependent on good behavior.

In Zayoud’s case, the court should have compelled his continued inclusion in the body politic. Zayoud was, and of right ought to be, a citizen of the State of Israel, if a criminal citizen. Instead, when Zayoud assumed himself an enemy of the Jewish state, the court verified his mistaken assumption. To his senseless crime, Israel gave reason: You are right. You are not one of us. You are our enemy, and we owe each other nothing. The exclusion of Zayoud as an insurgent from the body politic retroactively confirmed his claims against it and thereby retroactively justified them.

It was a mistake born of weakness, for only in weakness does the state revoke this most fundamental right  —  the very right to have rights. And it would have been a show of strength as well as a recommitment to Zionist ideals — ideals that are all too often compromised — had the state maintained Zayoud’s citizenship status in defiance of his violent deeds.

That said, it can hardly be denied that Zayoud separated himself from the political community of which he was a citizen.

The same cannot be said for the hundreds of Bedouin citizens of Israel who have been unceremoniously stripped of their citizenship over the past several years by the Interior Ministry.

Jack Khoury’s August report in Haaretz detailed a Kafkaesque nightmare for the Bedouin victims of an uncaring bureaucracy:

When Bedouin citizens come to Interior Ministry offices in Be’er Sheva to take care of routine matters such as changing their address, obtaining a birth certificate or registering names, the Population Authority examines their status, as well as that of their parents and grandparents, going back to the early days of the state. In many cases, the clerk tells them that their Israeli citizenship had been granted in error. On the spot, he changes their status from citizen to resident and issues them a new document. People who lose their citizenship are given no explanation and no opportunity to appeal. Instead, the clerk suggests that they submit a request and start the process of obtaining citizenship from scratch, as if they were newcomers to Israel.

Among these now-stateless Bedouins are individuals born in Israel to Israeli citizen parents. Among them are former Israeli soldiers and their children. Out of the blue, a low-level clerk informs them it was all a misunderstanding. Yes, the government acted for decades as if they were citizens. Yes, they paid taxes as citizens. Yes, they voted as citizens. Yes, every other member of their family is a citizen. Yes, they traveled abroad on Israeli passports. None of this matters. For Sawsan Zaher, an attorney for Adalah — The Legal Center for Arab Minority Rights in Israel who is working on both of these cases, the situation is gloomy. But Zaher and many of her colleagues in the Israeli human rights community do not find these developments especially surprising. The history of discrimination against non-Jews leads them to approach Zionism and Israeli citizenship with a bleak pessimism. From this pessimistic perspective, the denationalization of Palestinian citizens of Israel reflects an embedded, inexorable racism of the State of Israel against non-Jewish minorities. As such, Israel’s minorities value Israeli citizenship not because it is Israeli but because it is citizenship, and citizenship is preferable to statelessness.

But from a Zionist perspective, from the perspective of those who truly and deeply value Israeli citizenship, the denationalization of Bedouin Israelis is a threat not only to Bedouins but to the State of Israel itself.

How can a Zionist remain silent when Israeli citizenship is treated with frivolousness as it has been by the Interior Ministry? How can a Zionist bite her tongue while the very integrity of Israel’s body politic is under attack? How can a Zionist stand by while fundamental Zionist ideals about a shared society are discarded? Zionism came to fruition with an act of radical inclusion. The State of Israel was established with an earnest appeal “to the Arab inhabitants of the State of Israel to preserve peace and participate in the upbuilding of the State on the basis of full and equal citizenship and due representation in all its provisional and permanent institutions.” This was to be the covenant of citizenship in the Jewish state.

The founders of the State of Israel imagined a political community not only of Jews, but also of all who lived within its borders. Israel was to be a Jewish state just as Greece is Greek, Germany is German, and China is Chinese. But, just as all states have minority populations, Israel was not to be a state only for Jews. The extent to which Israel has not fulfilled its promise of full and equal citizenship and due representation for its non-Jewish citizens is the extent to which Zionism has not yet succeeded in its mission. The denationalization of Bedouin Israelis for no particular reason is an alarming regression that should enrage every committed Zionist.

In both the case of the Bedouins and the case of the terrorist, foolish officials aimed to excise those at the margins from the body politic as if they were malignant appendages. Many, like Zaher, respond to this iniquity by bemoaning the amputated limbs of the body politic. Their response is reasonable, even virtuous. But despite the actions of Israeli officials, a body politic has no arms nor legs to amputate. The very existence of a body politic consists solely in its wholeness. The strength of the nation is its integrity. The attempted amputation only hacks at the fabric that binds individual Israelis together into a sovereign political community. If my fellow citizen’s rights are in peril, so are mine. And the Zionist dream means that that holds for Jew and Arab alike.

The essential thread here is not as much discrimination against non-Jews in Israel as it is the danger to Israel and to Zionism — the danger to all Israelis — that results when government officials toy with Israeli citizenship. Stripping Zayoud of citizenship retroactively justified his crimes against Israel. Voiding Bedouin Israelis’ citizenship devalues the citizenship of all Israelis and frustrates Zionist ideals. These are actions that weaken Israel and sabotage Zionism. All that Israel has done is to attack itself.