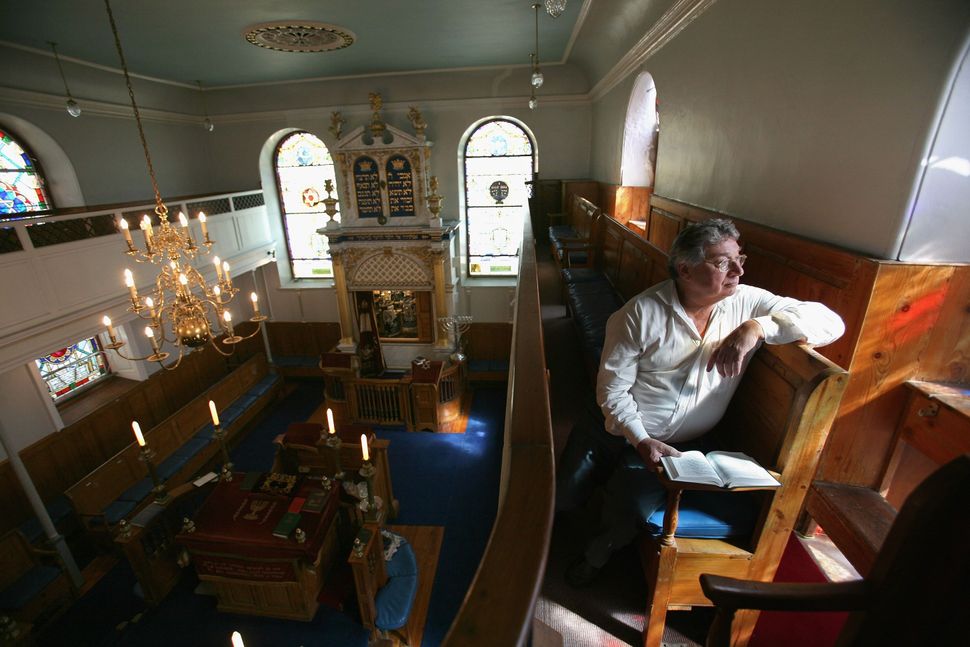 Yom Kippur made me an atheist. Or at least it confirmed for me that I already was one. By age 10, it was clear to me that the persona of a God that punishes the wicked and rewards the good — and the corresponding High Holiday liturgy — was a false explanation of how the world works.

I knew that a God who rewarded the good and punished the evil was false because I was close to my grandmother, and was aware of the terrible suffering she endured during the Holocaust. There was nothing she could’ve possibly done to deserve the punishment of losing her parents, siblings, and two young children.

I now know that our tradition is full of “answers” to this problem of theodicy. I’m aware of the nuanced debate about reward and punishment that exists over millennia of Jewish thought. Whether the sins of the parents are visited onto the children; whether we lack free will or genuinely choose between right and wrong; whether divine punishment and reward happens in our own lifetimes or in a hereafter; whether it’s individual or collective punishment—fascinating philosophical queries that ultimately have not altered my conclusion from childhood, that it is all backfill for a story that doesn’t hold up.

I am convinced that human misery is not due to humanity’s sins. Our pain and suffering is not fair punishment, to be received as a gift from a supposedly benevolent God who will make it up to us when we’re dead.

But my problem with Yom Kippur isn’t simply about enduring a few squeamish feelings during an otherwise interminable day of prayer. The ideas expressed so clearly in the High Holiday liturgy have real world consequences. The superstitious notion that suffering is divine retribution, which people bring upon themselves through immoral behavior, has been used as an excuse to enslave and brutalize throughout history.

This is not to say that liberal Jews themselves believe in these justifications. Quite the opposite in fact: Liberal Jews scoff when alleged faith leaders (Jewish or Christian) claim hurricanes are God’s punishment for “sins” ranging from not supporting Israel to homosexuality. In other words, though they repeat the verses that make similar claims in synagogue, like me, they do not believe them to be true.

The simplistic reward/punishment relationship is obsolete to most Jews’ understanding of the world. Nevertheless, it remains such a powerful feature of the holiday liturgy in most congregations.

That won’t be changing anytime soon. For starters, the folks who are most turned off by this and other untenable aspects of Jewish religion have walked away. At any given time, less than a third of Jewish households are affiliated with a synagogue. Large crowds during the High Holidays may seem like everyone in the Jewish universe is packed into your Temple, but all the services combined likely touch less than half of American Jewry. This widespread disengagement should be registered as a vote against business-as-usual Judaism.

The folks who stick around obviously have the larger say, and they are more likely to believe the story as it’s told. Those who make decisions about liturgy are even more likely to believe. That’s all fine. I’m not the kind of atheist that wants to burst believers’ bubbles. If it provides you with comfort and doesn’t hurt others, by all means pray for eternal reward. You should know, though, that you are in the minority of Jewish belief. The 2013 Pew survey of American Jewry found that 66% of Jews do not believe in God with “absolute certainty,” almost the mirror opposite of the 68% of our fellow Americans who do believe with certainty.

Another objection to moving past this liturgy, even by those who don’t believe it, might be that this is “how we’re supposed to do it.” And “who are we to change Judaism?” Well, we’re the Jews. We are constantly changing Judaism. Or have you recently ripped open a goat to appease your God? Judaism survived thanks to evolution, not calcification.

I’ve had the honor of asking rooms full of some of the most affiliated Jews, “Who here expresses your Jewish identity exactly as your grandparents did?” Almost no hands go up. Sure, the “right way” to wrap teffilin or chant Torah may remain unchanged over many generations. What changes is whether it’s right for us. When it isn’t, most people stop doing it.

Despite the innovation coursing through Jewish communities across the country, the reality is that most people are not attending High Holiday services for the words, one way or the other. That may be the most powerful inertia keeping the reward/punishment liturgy in place. Many Jews simply overlook what they’re saying because they’re at synagogue for other reasons: to connect to community, to express their Jewish identity (or support their family members who are Jewish), to maybe learn something from the accessible (i.e., English) parts of the service, and to feel moved by the music, or thinking of something larger than themselves, or remembering lost loved ones.

Does it work? Do the High Holidays provide meaning? Regardless of denomination, results vary from congregation to congregation, person to person. I’ve always been a bit baffled by the folks who only connect with organized Judaism these few days a year. My theory is that 12 months is exactly the right length of time to forget how unfulfilled and bored-out-of-your-skull you were last time and come back for more.

The thing is, all of those benefits can be attained without also having to recite statements many of us find untrue and offensive. Rabbi Sherwin Wine for example rewrote Jewish liturgy for a modern sensibility. The movement he founded over fifty years ago, Humanistic Judaism, was an attempt to keep the meaning in Jewish congregational life—holiday celebrations, lifecycle rituals, youth and adult education, social justice, cultural expressions—while swapping the appeals to supernatural intervention with a Humanistic philosophy.

A Yom Kippur in this tradition – which is also my chosen tradition – contains many elements linking past to present. Remembrances of loved ones lost, reflections on how we might do better in the coming year, and music (including shofar blowing) are all recognizable to Jews who grew up in any movement. Yet the Humanistic Judaism liturgy allows us to commemorate the holiday while “saying what we mean and meaning what we say,” reworking traditional Jewish texts non-theistically and incorporating additional modern voices from Carl Sagan to John Lennon.

Until I experienced it, I hadn’t fully realized the kind of mental gymnastics I’d been doing at traditional services around the words I didn’t believe; agreeing with what I was reading was like having a weight lifted.

This is how I now observe Yom Kippur, the right way—for me—and it makes me a better Jew. I hope we can open up many more right ways, so that the other half of American Jewry might also find benefit in Jewish communal participation during the High Holidays.

Paul Golin is executive director of the Society for Humanistic Judaism (www.shj.org).