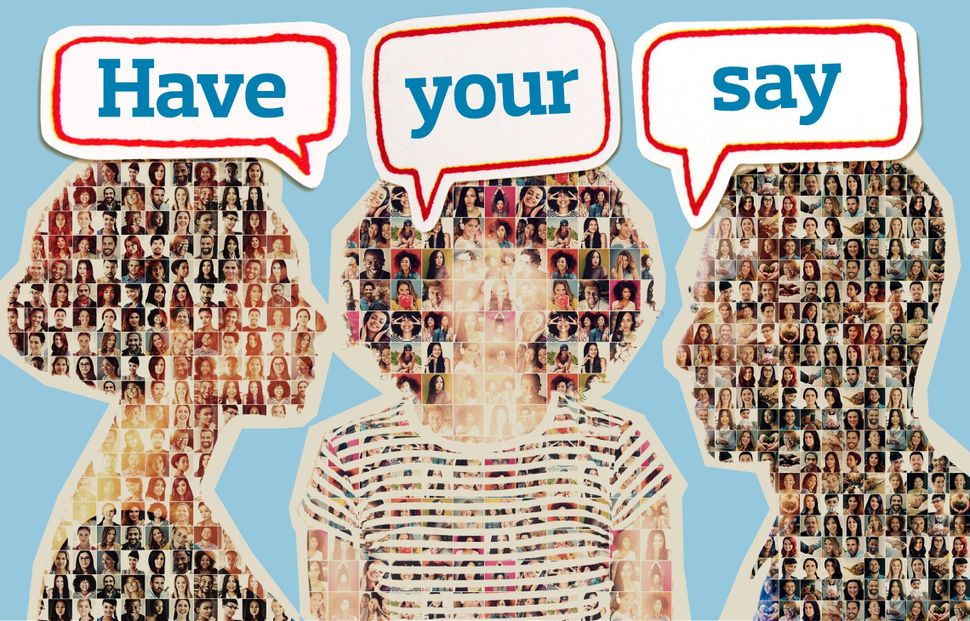 Have Your Say is your chance to tell us what you think. This week, we asked you if it’s anti-Semitic to schedule something on Yom Kippur. Here are some of your answers:

“If there is a significant specific population and if the event is likely to be of interest or concern to that population, then scheduling an event that could be otherwise scheduled is on its face suspect.” — David Cohen

“It’s all about intent. If the intent is to choose a day that Jews are unlikely to attend because Jews are unwanted, it’s anti-Semitic. If that day is chosen for any other reason, it’s not. This year, YK is also Saturday, which is a popular day for holding rallies and such. If YK were on Tuesday, I’d be more suspect, but in either case, that it’s YK is not, in and of itself, definitive.” — AviS

“Not necessarily, but in the age when Jews are excluded from certain self-proclaimed activist groups and Jews are told at schools that they might be biased on certain issues because they are Jewish, we have to wonder more than we might have in the past.” — George Naftali Muenz

“I’d like to believe that Jews are the center of the world and all of our holidays and practices should be considered before decisions are made to schedule anything for anyone: meetings, graduations, tests, blast offs — whatever. However… we are a small percentage of the population and need to chill on this subject. Usually when this happens it’s because no one even thought to look at a calendar that includes Jewish observances. It’s almost never anti-Semitism. Ignorance and cluelessness, yes.” — Keith Stern

“Anti-Semitic…hard to say. Would you schedule it on Christmas, Easter? If you schedule your event on one of the biggest days of the Jewish year and Jews don’t show up, don’t blame us. And if you do it, and then cancel/move, don’t be surprised when people feel like they weren’t being included and stay home. If you don’t care about including Jews, some of the most reliable allies in fighting for civil rights, equality/equity, environmentalism and most other socially motived political causes, then go ahead and schedule it on Yom Kippur. It’s ignorant or indifferent at best and exclusive (and maybe anti-Semitic) at worst.” — Daniel Myers

“It’s certainly tone-deaf. My kid’s public school (in SoCal) scheduled two parent-participation events for the two nights of Rosh HaShana. When we wrote the principal, she thanked us for our ‘concerns’ but blamed the school board (no other school in the district has events these nights). I am actually much more upset about that.” — Heather Brody

“Is it racist to never depict a person of color on TV or in films? Is it gynophobic to assume that all leaders, in every profession and in politics, are male? Is it homophobic to insist that LBGTQ people can be ‘cured’ and are just being ‘uncooperative’ otherwise? Representation matters. Inclusion matters. Sensitivity matters. Acceptance matters. Proportionally, Jews are not only more politically active than other U.S. demographic groups, we also tend to contribute more money, be more liberal, and put ourselves on the line more often in terms of both public activism and devotion to causes over time. So YES, to unthinkingly schedule events in which Jews would ordinarily participate on the ONE CALENDAR DATE when Jews are most likely to be in shul is clearly anti-Semitic.” — Delia Delion

“No more so than scheduling something on a Christian holiday is anti-Christian. As American Jews we have enough to worry about. Stop TRYING to be offended!” — Nix Elizabeth A-Bomb

“America is not a Jewish nation. It is pluralistic. This aside, inclusion brings strength and mutual respect. Scheduling what should be a unifying event on the holiest day of the year for Jews shows pointed ignorance at best, intentional exclusion at worst. Educate yourselves, Christian brothers and sisters. Jesus was Jewish, as were his mother and his God.” — Ellen Robbins

“My husband was made troop/den/pack (whichever the head one is) leader of my son’s cub scout troop many years ago and was very proud. Then the calendar comes out and the night he was supposed to be holding his first meeting…where he would be introduced to the entire den..was Yom Kippur. He asked for it to be moved and it turned into a major incident. The troop didn’t understand that the holiday started at sundown and used the fact that the kids had off from school the next day, and not that day, as a reason they could hold the meeting. He tried to appeal to them numerous times and ask them to move it and even went up the chain within the organization. Basically, he was told that the troop is sponsored by the church it holds its meetings in and is therefore a Christian-based organization. This was from the priest who was the head of the church. I don’t know if this was all blatantly anti-Semitic, but it was anti- what scouting should be all about…inclusion, togetherness and sensitivity to all all. Suffice to say, hubby ended up stepping down (which was heartbreaking for him, but he felt so hurt), and we left the troop shortly after for another one.” — Lainie Kantrowitz

“Not necessarily anti-Semitic, but definitely tone-deaf. And misguided if someone abandons their practice to participate, thereby excusing the decision.” — Tyler Grasee

“Given the current climate, one does become suspicious. That being said, let them march, I’ll be at shul.” — D Chase Callahan

“How many of you know Buddhist holidays? Hindu? Sikh? Muslim? Does that make you biased towards them or just ignorant(unaware) of their culture?” — Kiki LeGrand

“I don’t buy the ‘lack of awareness’ bit: Yom Kippur appears on every calendar in America. If you don’t know what it is, ask. If you don’t want Jews at your event, don’t ask.” — Helene Sicherman

“I’ve just accepted that the majority of Americans don’t have a clue about Judaism so they don’t factor it into planning. Nothing malicious in most cases.” — Ascher Levy