North Korea Has Exposed The Left’s Weakness For Dictators 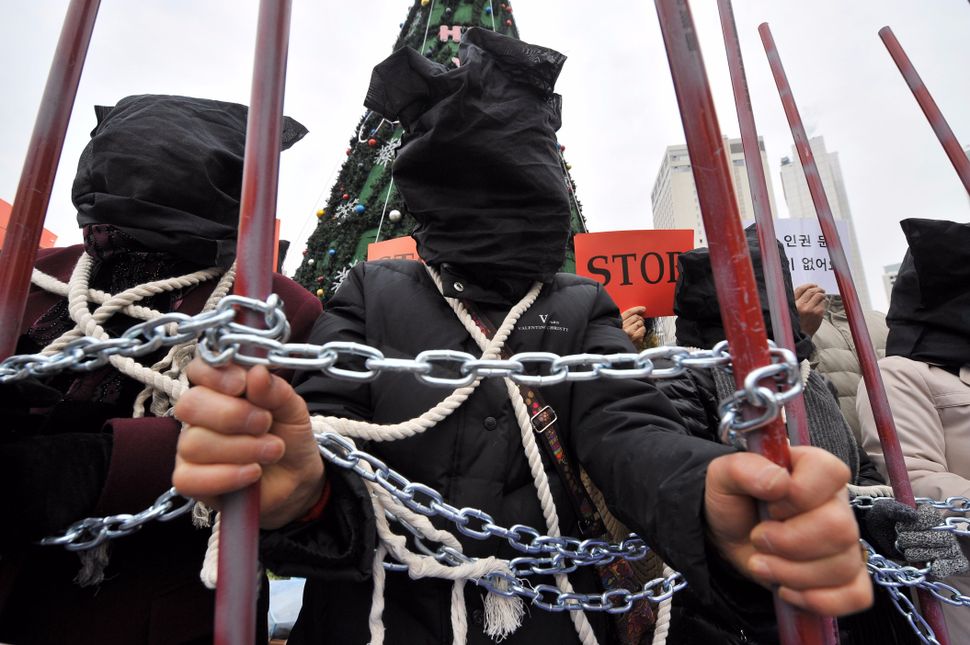 Several weeks ago, I was honored at a gala for an organization called Liberty in North Korea. The organization rescues North Korean refugees living in hiding in China, and resettles them in South Korea or the U.S. to prevent them from being forcibly repatriated to North Korea. Over the course of the last five years, I have raised $60,000 to fund the 3,000 mile journey out of China to Seoul for almost twenty refugees and counting.

At the gala, I heard the harrowing story of a woman whose pseudonym is Joy. She escaped an abusive home in North Korea, where her stepmother tried to marry her off without her consent. She ended up in China, where she was married to a Chinese man against her will, forced to live and procreate with a man she had never had a conversation with because of the language barrier. She had a daughter with him, who became her only source of happiness.

Two years after the birth of her daughter, a South Korean man approached Joy. He told her he could get her to South Korea, where she would receive automatic citizenship, without having to pay or owe a coyote for the 3,000 mile voyage. But there was a catch. The trip was too long and too arduous for her toddler, and Joy would have to leave her behind.

Joy was forced with an impossible choice: stay in China with her daughter and her husband, or make a new life for herself. She chose the latter. At the gala, Joy told us of the day she left. “In the early morning of my secret departure, I held my sleeping child in my arms and silently wept,” she remembered. “I thought about the moment she would wake up and cry because I was not there. It reminded me of the day that my own mother had left. I had felt so lonely and wondered for so long why she had abandoned me. I resented her for giving birth to me if she wasn’t interested in raising a child. And now I was about to do the same thing to my own daughter.”

Joy is never far from my thoughts. Liberty in North Korea helped her along the way, and she credits them with her escape from China. I decided to work with this organization because fighting a dictatorship – a real dictatorship – seemed like an absolute good (I’m currently holding another fundraiser to rescue twenty more refugees).

But it takes just a short trip to Twitter to realize that I am not joined by all Americans in this view.

Take, for instance, the liberal response to Trump’s latest travel ban. Last week, Trump announced that he would be expanding his original travel ban to include Iran, Venezuela and North Korea. When I heard that, I immediately thought of Joy, and how this would have affected her, and how this will affect others like her. I was relieved to learn the ban does not apply to those seeking asylum, or to a refugee who has already been granted access to the United States, according to the White House.

But my response was not the general response on liberal Twitter. Take, for instance, Linda Sarsour, one of the leaders of the Women’s March. Sarsour tweeted, “You would think North Koreans are lining up in the droves to come to the US but THEY ARE NOT. Smh.”

You would think North Koreans are lining up in the droves to come to the US but THEY ARE NOT. Smh. ??‍♀️ #NoMuslimBanEver

Maybe Sarsour believes that North Koreans aren’t interested in America because its liberties are too threatened by Donald Trump to tempt them. Or maybe what she meant was that the number of North Koreans trying to escape is so incredibly low, and thus unimportant, that the only real targets of the travel ban are those from Muslim countries.

Whatever her intention may have been, Sarsour chose to delegitimize the plight of North Korean refugees just to score a cheap political point against Donald Trump.

Sarsour is not alone. A few weeks ago, Chelsea Handler had a similar message about the dictator of the communist regime: “Uhhhh. Kim Jung’s letter to @realDonaldTrump is a little bit more sane than @realDonaldTrump. Maybe we trade?”

Of course, Handler is a commedian and she no doubt meant this comment as a joke. But the joke falls flat because of the truth at its core: Handler truly seems to believe that Donald Trump and Kim Jong Un are comparable.

But even more disturbing than Sarsour and Handler has been the New York Times’ Nickolas Kristof’s tweets from his visit to North Korea this week. Kristof has been speaking to North Korean citizens with the use of government-provided translators, and tweeting their statements with nary a disclaimer about what ends could meet anyone who dares utter the truth about the regime to a foreign reporter. In this capacity, Kristof tweeted the following about young women who allegedly signed up for military service after Trump’s speech at the UN:

Every kid at this North Korea high school supposedly signed up to join the army after the Trump… https://t.co/BehPXAo71Z

Even if the students had enlisted, it would have been hardly voluntary in a country with a draft — a fact Kristof doesn’t bother to mention. Nor did Kristof bother to disclose the longstanding anti-American brainwashing that takes place in North Korean schools like the one he visited. The schoolchildren’s response, if it happened, would not have been about Trump but rather about America.

But to Kristof, these inconvenient truths couldn’t hold a candle to the possibility of scoring a point off of Trump. Like Sarsour and Handler, for Kristof, the truth about North Korea is immaterial if there’s a chance to take a jab at a more domestic enemy.

In some ways, I get it. It’s true that in the history of American presidents, Trump is not the one most committed to the constitution. And it’s also true that when it comes to North Korea, his actions have been imprudent to say the least. With every tweet about the Korean dictator, who Trump has immaturely nicknamed the “Rocket Man,” it feels as though the President is sending us careening towards nuclear war with an unpredictable madman.

But that doesn’t mean Trump is on par with or worse than Kim Jong Un.

It’s incredible that those words need to be uttered. Yet, here we are. The President of the United States is not on the same level as a dictator who holds power with mass brainwashing, who funds his excesses with the indentured servitude of his citizenry across the world while millions have starved, and whose family has operated concentration camps the size of Los Angeles for decades.

Still, predictably, neither Handler’s nor Sarsour’s statements drew much attention outside of conservative circles. That’s because defending and ignoring dictators is hardly new for liberals, who have a long history of holding up oppressive regimes. Sarsour herself has defended Sharia law, for example, tweeting, “You’ll know when you’re living under Sharia Law if suddenly all your loans & credit cards become interest free. Sound nice, doesn’t it?”

Similarly, defenses of communism abound, to say nothing of the liberal love for dictators like Hugo Chavez and the Castros in Cuba. After Castro’s death there was no shortage of whitewashed obituaries, even from world leaders. Just this week, the New York Times ran an incredibly historically ignorant column about communist China with the Twitter tagline “For all its flaws, the Communist revolution taught Chinese women to dream big.” The tweet began a Twitter game, with conservatives offering similar defenses of other murderous dictatorships.

For all its flaws, Pol Pot’s reign of terror raised the international profile of oft-neglected Cambodia

It reads like a joke, but long after refugees began streaming over the Thai border, there were indeed defenses of the Khmer Rouge regime from leftist academics and influencers like Noam Chomsky.

But this kind of whitewashing goes much higher up in liberal circles. A contender for the 2016 Democratic nomination for the White House, Bernie Sanders, who is arguably the future of the progressive movement, wrote on his Senate website in 2011,

“These days, the American dream is more apt to be realized in South America, in places such as Ecuador, Venezuela and Argentina, where incomes are actually more equal today than they are in the land of Horatio Alger. Who’s the banana republic now?”

Now that Venezuela, thanks to its America-hating dictatorship, has descended into abject misery, Sanders is noticeably silent on the situation there. Just four years ago, British Labor leader Jeremy Corbyn had similar praise to offer: “We salute Chavez and the people of Venezuela for turning the clock of history full circle.”

Then there’s the soft apologism of dictatorships you can find among liberals. The author of an entire book on genocides the United States had ignored, Samantha Power, remained a part of the Obama administration as the UN Ambassador while Aleppo burned. Before joining the ranks of those she exortiated, Power wrote of the human rights catastrophes “bleeding heart liberals” ignored throughout American history: Franklin D. Roosevelt and the Holocaust, Bill Clinton and Rwanda.

Liberals get caught up in defending or failing to call out dictators due to a willingness to ignore human rights violations in favor of hitting domestic political opponents. Like the jabs at Trump that Kristof, Sarsour and Handler tweeted, all of which erased millions of North Koreans and their suffering, liberals allow their agenda to whitewash all manner of civil and human rights abuses.

And the truth is, it’s understandable. If you’re bothered by inequality and you see someone who seems to have somewhat solved that issue, it’s tempting to praise them – even if they aren’t praiseworthy in any other way.

Sarsour, too, is understandable in how upset she is by the Trump administration’s so-called “travel ban”. Even if the order itself is ultimately deemed by the courts to be constitutional, the intent behind it is clearly unconstitutional, seeing how it’s aimed at banning Muslims from entering our country — a point made explicitly on Trump’s campaign website. And to the extent that the ban is unconstitutional, it should appall liberals and conservatives alike.

But Sarsour’s and Handler’s and Kristof’s hatred of Trump and his policies has clouded their moral judgment on the far more serious offenses of other world leaders.

There is no moral relativism necessary when it comes to North Korea. Donald Trump may indeed be bad, but that doesn’t make Kim Jong Un someone any American, opponent or supporter of Trump alike, should spend their time defending. More than ever, Americans need issues we can rally around and speak out about in one loud, resounding voice. The human rights situation in North Korea can and should be one of those issues that unites liberals and conservatives.

North Korea Has Exposed The Left’s Weakness For Dictators