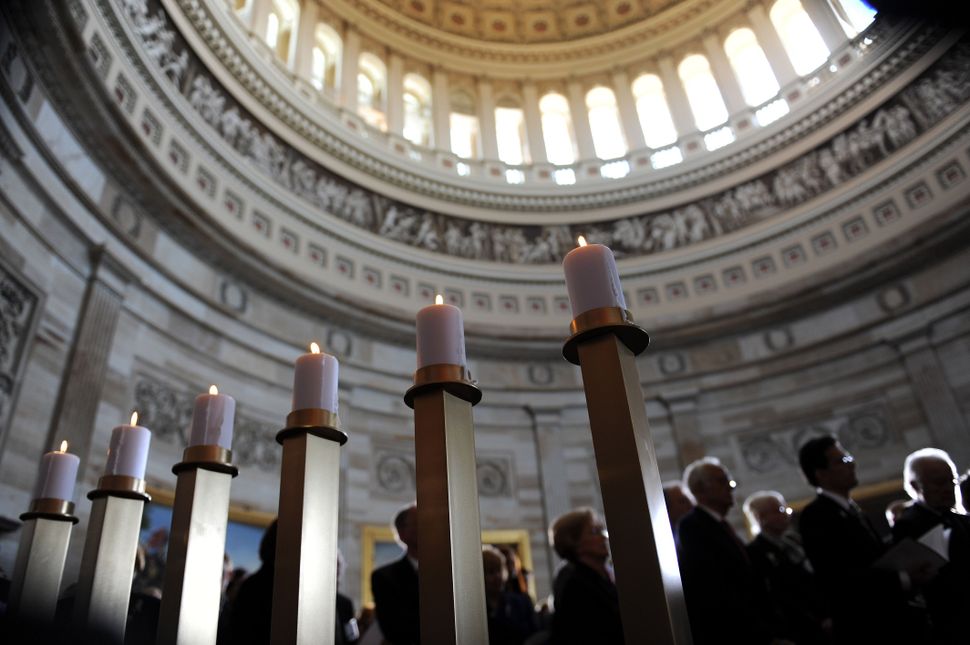 Earlier this week, the United States Holocaust Memorial Museum (USHMM) issued a press release about the use of the Holocaust to describe present day atrocities. They joined a host of other voices who had condemned Congresswoman Alexandria Ocasio-Cortez for calling the U.S. asylum seeker detention centers “concentration camps.”

“The United States Holocaust Memorial Museum unequivocally rejects efforts to create analogies between the Holocaust and other events, whether historical or contemporary,” reads the statement.

The USHMM’s response wasn’t directly aimed at Ocasio-Cortez. It was triggered by a tweet by USHMM’s staff historian Dr. Becky Erbelding, who was responding to reports that children were being held on the U.S.-Mexico border in deplorable conditions. “The parallels to the 1930s – 1940s refugee crisis are so obvious. Why can’t we learn?” Erbelding asked.

In response, the USHMM issued a stern press release not only rejecting the comparison of ICE centers to concentration camps, but distancing themselves from Erbelding’s statement.

Numerous other historians have weighed in to support Ocasio-Cortez’s analogy as accurate. Indeed, many stated outright that ICE detention centers are concentration camps, writing essays that went much further the Erbelding’s tweet. It’s also important to note that Erbelding was tweeting from her personal account, not in a capacity as a USHMM staff member.

The USHMM’s reaction was unwarranted. Even worse is a comparison between this statement and all the things they have not been talking about. Press releases, especially ones from a massive institution funded by U.S. taxpayers, don’t write themselves. A press release is the result of a decision, one that is not taken lightly. But as the Holocaust has taught us, silence, too, is a statement; silence, too, is the result of a decision. And over the past several years, the USHMM has decided to remain silent on some rather strange things.

To their credit, the USHMM did issue several commendable press releases about Poland’s Holocaust denial law as well as Holocaust distortion in Hungary and Ukraine. But those statements are a drop in the bucket compared to the rampant distortion and denial which has unfolded over the past several years.

Here are just a few recent instances of Holocaust distortion and denial the USHMM’s press release archive does not have a statement on.

Last month, a monument to Lithuanian WWII resistance fighter Adolfas Ramanauskas-Vanagas, was erected in Chicago. According to the Simon Wiesenthal Center, Ramanauskas-Vanagas led a gang which persecuted Jews in the aftermath of the Nazi invasion of Lithuania.
This April, Polish nationalists held a rally in New York protesting Holocaust retributions. Numerous signs and leaflets promoting anti-Semitism and Holocaust denial were reported by, among others, journalist Molly Crabapple.

In February 2018, Polish Prime Minister Mateusz Morawiecki told the child of Holocaust survivors there “Jewish perpetrators” to the Holocaust. Leading Holocaust historian Deborah Lipstadt condemned this as a form of Holocaust denial.

In March 2019, hundreds marched in a Latvian parade honoring SS veterans – as in actual soldiers in the Third Reich’s Waffen-SS. (A similar march held in March 2018 also went unaddressed by the USHMM).

In July 2018, the Croatian national soccer team celebrated its World Cup run by inviting a singer who promotes the country’s Nazi-allied Ustashe, who had committed war crimes against Jews and Roma. Croatia’s whitewashing of the Ustashe has also been done by their president, who posed with an Ustashe symbol in 2016.

In June 2018, a plaque honoring an SS veteran was unveiled in Estonia.

This is merely a small selection of outbursts of Holocaust distortion and denial the USHMM did not comment on. But when a United States Congresswoman made a comparison supported by numerous historians, the USHMM sprang into action – and landed on the wrong side of history.