Thank You, Lt. Col. Vindman, For Reminding Us Who We Are 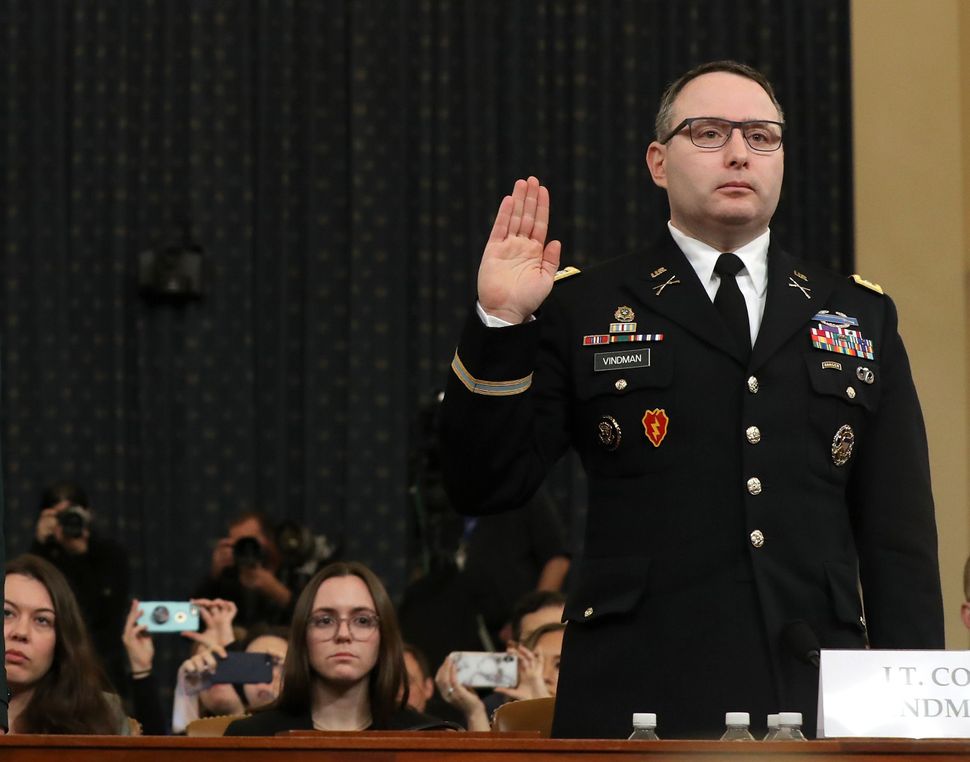 Watching the impeachment hearings, I was transported back to September 1972 when I briefly encountered — in a very personal fashion — the face of the KGB. A frightening moment, it offered me a glimpse of what an antisemitic authoritarian government is capable of.

I had arrived in Moscow with a friend Erev Rosh Hashana in order to visit refuseniks, those Jews who wanted to leave but were refused permission to do so by Soviet authorities. We had been asked by Israeli officials, who because of the break in diplomatic relations after 1967, could not travel to the USSR, to reach out to Jews who wanted to leave, do some teaching of Jewish history, deliver medications to those who needed them, and remind them that they were not forgotten. In later decades there would be a steady stream of visitors, but this was the early years of the movement and western Jews, particularly those who were versed in Jewish tradition, were a rarity.

At the time of our visit, pressure on this first generation of refuseniks was building. They faced daily indignities. They were followed by the KGB, fired from prestigious jobs, and given the most menial positions possible. Their children were harassed at school. But they were speaking truth to power and showed no fear.

After Rosh Hashana in Moscow, we travelled to Kiev and then headed to Chernivitsi (Chernovitz), a city in the northern Ukraine, in the area of Bukovina, to spend Yom Kippur. I spent the day in front of the synagogue talking with those people, young and old, who were not afraid to reach out to us. Mid-day, a cry came from the windows of the synagogue: Yizkor, the memorial prayer. My father had died to previous spring and I was in my year of mourning. I took out my little siddur and began to recite the prayer. I finished and was about to return the siddur to my pocket, when someone tugged on my arm and asked in Yiddish if I could say the prayer for them. I did. And then came another person and another. Many of these were people who had previously been reluctant to speak with us. None of them could read Hebrew but they had long lists of people whom they wanted to be included in the prayer. For the next 30 minutes or so I became a shaliach tzibbur, a representative of those gathered around me.

Later in the day, the sexton – shammes – of the synagogue, someone who was a government employee and who considered us troublesome interlopers, encountered me and began to screech, “Provocateur, you have only come to make trouble!” Frightened, we left the synagogue.

A few days later, as we were waiting for a car to take us to Kishinev for Sukkot, we were surrounded by trench coated men (yes they wore trench coats), bundled into separate cars and taken to some remote location where we spent the day being questioned. We were strip searched and our luggage dismantled. They wanted the names of those who had showed us any kindness. Well aware that we were not spies, they had two objectives: frightening those Jews who might reach out to welcome the next set of visitors and convincing us to tell others not to come.

At the end of the day we were put on a train to Bucharest. The train was packed but our car was completely empty except for one traveler who, miracle of miracles, was assigned to our compartment. We could not even discuss what had just happened to us.

As darkness fell, I stood by the window and thought back on the exceptionally brave people I had met. They were willing to uproot their lives to escape antisemitism and find something they vaguely knew as freedom.

Why did the impeachment hearings bring this moment to mind? In his opening statement, Lt. Col. Alexander S. Vindman, a Purple Heart recipient and an Iraq war veteran, whose chest and shoulders bore his Combat Infantry Badge, his Ranger tab and other recognitions of his military service, described how at age 47, his widowed father left the only life he knew in order to raise his three sons in freedom. Their grandmother came with them so that she could look after the boys while their dad worked, learned the language, and built a future for his children.

Though the family has been in this country for close to 40 years, some memories die hard or don’t ever die at all. In his opening statement Col Vindman spoke directly to his father who was “deeply worried” about his son’s testimony because in “his context” — an authoritarian one — his son was “taking the ultimate risk” by saying things critical of the President. But this medal bedecked officer, who carries shrapnel in his body, reassured his father that he did not have to worry: “I will be fine for telling the truth.”

When subsequently asked by a member of the committee why he could be so sure in his reassurances to his father, Vindman spoke simply and directly: “Because this is America. Here right matters.” The room echoed with applause.

But Vindman spoke not just of fear of the communist regime, but of gratitude to his adopted country. All three children in the family served in the military as a means of paying back this country.

As he kept emphasizing his gratitude, I was reminded of how central gratitude is to Jewish tradition. Upon arising, a Jew is to turn to God and proclaim, “Modeh ani lefanecha,” I am thankful to you. Three times a day, a Jew is supposed to bow, as many still do, in gratitude at the Modim prayer. After a meal, they are to say an extended thank you.

Since 1972, as my encounter with the KGB receded into the past, I have tended to take for granted that which Colonel Vindman so treasures. Listening to this brave man testify, I was exceptionally grateful, not just for his service to this country, but for the reminder of how much all of us — not just immigrants and refugees – have to be thankful for.

Thank You, Lt. Col. Vindman, For Reminding Us Who We Are