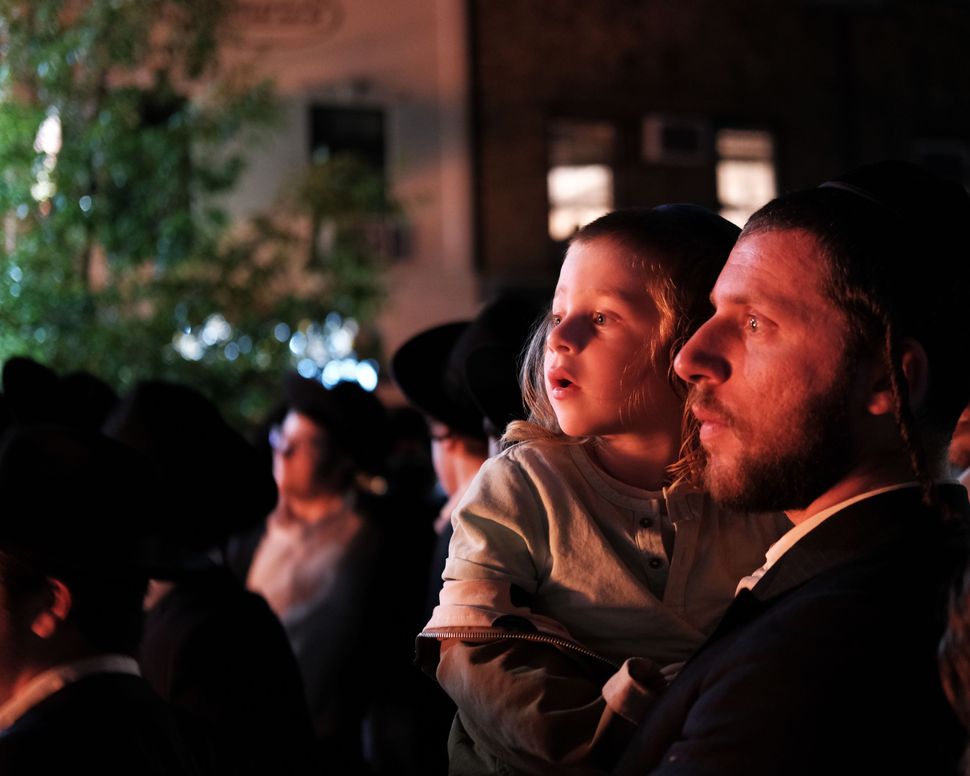 There’s a poem Jews sing every evening after lighting Hanukkah candles. It’s called “Maoz Tzur” — Rock of the Ages — and was written during the Crusades, one of the many times when Jewish blood ran through the streets; its lines are laced with the tragedy and longing that typifies Jewish liturgy.

One chokes me up every time I sing it – eight nights every year: “Our salvation takes too long, and there is no end to the bad days.”

The words always called to mind Jews practicing their religion during some long-ago horror – the “bad days” of murdering Crusaders and marauding Cossacks, the bad days of pogroms, the bad days spent starving in ghettos and concentration camps. Wherever they were, Jews lit candles and sang this song, waiting, waiting for salvation. How fortunate are we to live in a time without such fear, I would think, tears creeping into my eyes and the words catching in my throat.

The bad days are back.

Orthodox Jews are living through a new age of pogroms. This week, as we celebrated the Festival of Lights, there were no fewer than 10 anti-Semitic attacks in the New York area alone: A 65-year-old man in Manhattan punched as the assailant yelled “Fuck you, Jews.” A 67-year-old man and his 6-year-old son attacked by a group of teenagers in Brooklyn. Three women slapped in the face by a woman who confessed it was, simply, because they were Jews.

And last night, on the seventh night of Hanukkah, a man wielding a machete the size of a broom charged into a Hanukkah celebration in a rabbi’s house in the ultra-Orthodox enclave of Monsey and stabbed five people, two of them critically.

But this is not some Hanukkah fluke. Just a few weeks ago, a kosher supermarket in Jersey City was shot up by extremists, three people killed in cold blood. The target, Jersey City’s mayor said, was a school upstairs, where 50 Hasidic children were hiding under tables, terrified as the shots went on for hours.

That supermarket shooting also didn’t come out of nowhere. For those paying attention – not enough people, sadly – these attacks are part of what has been an increasingly frequent series of violent outbursts targeting Orthodox Jews in Brooklyn over the past two years.

A man whacked across the face with a brick, losing all his teeth. A woman’s wig torn off her head. A mother beaten with her child in tow. Eggs thrown at another woman and her little boy.

Almost as horrifying as the attacks themselves is the seeming inability of those whose job it is to protect the vulnerable to figure out what is causing them, or how to stop it from happening over and over.

After the massacre at a Pittsburgh synagogue on Shabbat that killed 11 people last year, and another fatal shooting at a shul in Poway, California six months later, one often heard that the great threat to Jews – even the only threat – comes from white supremacy. Conventional wisdom said it was the political right, and the right’s avatar in the White House, that was to blame for the rising levels of hate against Jews.

But the majority of the perpetrators of the Brooklyn attacks, and the suspects in Jersey City — who were killed in a shootout with the police — and now Monsey, were not white, leaving many at a loss about how to explain it or even talk about it. There is little evidence that these attacks are ideologically motivated, at least in terms of the ideologies of hate we are most familiar with.

And therein lies the trouble with talking about the violent attacks against Orthodox Jews: At a time when ideology seems to reign supreme in the chattering and political classes, the return of pogroms to Jewish life on American soil transcends ideology. In the fight against anti-Semitism, you don’t get to easily blame your traditional enemies — which, in the age of Trump, is a non-starter for most people.

But conspiracy theories flourish on the left as well in today’s day and age. They twist and torque those rigid ideologies to which so many are enslaved, reshaping the extremes from polar opposites into a horseshoe whose ends meet — again and again — to justify, excuse, or muzzle criticism of anti-Semitism.

It has resulted in a staggering, shameful silence when it comes to speaking out on behalf of the wave of pogroms against the Orthodox. For many people, it seems when they can’t blame the other side of the political aisle, they would rather say nothing at all.

This is not acceptable. The Jewish community’s most visible, vulnerable members need Americans to stand up and say “no more.” They need us to climb out of our trenches and find common ground to fight this ugly resurgence of anti-Jewish hatred.

We can only fight this fight together, because it is a pox on all of our houses. It is only by remembering what unites us as Americans that we can help our fellow Jews and, as “Maoz Tzur” suggests, hasten the time of salvation.