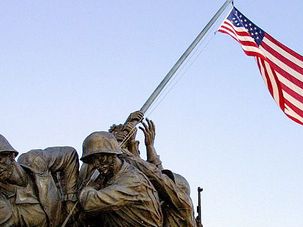 A Very Yiddish Take on the Star Spangled Banner

Most people look at the American flag and see stars and stripes. But some Yiddish speakers, particularly the late poet Abraham Liessin, saw noodles and pasta.

As the old saying goes, one person’s trash is another person’s treasure. That was certainly the case yesterday when deteriorating documents, newspapers and coins were unearthed at the Jewish History Museum in Tucson, which once served as Arizona’s first synagogue. The items were found in a time capsule buried inside a cornerstone of the building 100 years ago by members of the original congregation.