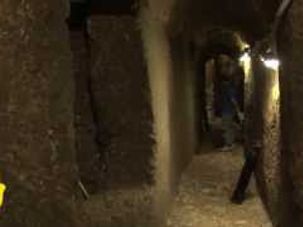 A new treasure has been discovered at the Davidson Archeological Park in Jerusalem’s Old City… At the foot of Robinson’s Arch, on the southwestern wall that surrounded the ancient Second Temple , steel bars guard the entrance to an even older find… Archeologist Eli Shukrun — the site director from the Israeli Antiquities Authority — took us deep underground to see what his team stumbled upon while digging for other things. 15 meters down, we walked through what archeologists believe is an ancient Herodian tunnel… Shukrun stops at hole and begins to climb down a ladder…it leads to this enormous ancient water reservoir…it can hold more than 66000 gallons of water…or 250 cubic meters… The reservoir’s plaster and the design indicate it’s 3000 years old… Archeologists believe this reservoir was a public one, used during what the bible describes as King Solomon’s Temple. It was built in 986 BCE and destroyed in 586 BCE by the Babylonians. Finding artifacts from that time period is extremely rare after more than 2500 years of new construction. Archeologists used to believe that during the First Temple period, about 1000 before the common era, the inhabitants of Jerusalem would go further south to the Gihon spring for their main source of water. But now the discovery of this water reservoir, so close to where the Old Temple stood, has changed that picture… Pilgrims, local residents, Temple workers — any and all of them could have used what this public …

A public water reservoir dating to the First Temple period was unearthed next to the Western Wall.