For the attendees of Kosherfest, the kosher food industry’s largest annual trade show-cum-feeding frenzy in New York, sampling from the hundreds of booths demands more than a healthy appetite; it requires strategy. With a sizable number of observant Jews among the 7,000 attendees at the recent convention — which marked Kosherfest’s 18th anniversary — the kosher laws prohibiting the consumption of dairy and meat together definitely play a part in the plan of attack.

“Make sure not to eat any meat first-thing,” I overheard one woman in a flawless sheitl warn her friend as we descended the escalator at New York City’s Javits Center and plunged, mouths first, into the fray.

With nearly 10 million kosher consumers, Kosherfest is more than a soup-line shuffle — it’s big business. I come to get an inside look at the newest products and trends in the industry, and also to revel in the cross-denominational, co-religionist ethos that permeates the event.

At Kosherfest you’ll see black-coated Hasidim talking shop and scanning the identity badges of fetching female businesswomen, non-Jewish merchants vying for a slice of the $11 billion kosher market (I tried some delicious tahini made by Christian Arabs from Bethlehem) and amateur food enthusiasts willing to shell out $100 per ticket for a day of unlimited fressing.

Personally, somewhere between my third sample of flaky borekas, my fourth Elite mini-candy bar and a free-flowing supply of quality Yarden wines, food coma sets in, threatening to compromise my ability to take legible notes and to network without embarrassing myself. This year, I vowed, would be different.

When I first began attending, around five years ago, Kosherfest was much more about haimish eats than anything else. Multiple companies were hawking nearly identical varieties of gefilte fish, and pizza bagels were in abundance. But things began to change as kosher consumers became more savvy and health conscious, and such kosher cookbook authors as Suzie Fishbein and Jeffrey Nathan, who each have appeared as celebrities at Kosherfest in recent years, spread the word that “upscale” and “kosher” could play nicely together in the sandbox. Indeed, there were some fancy food finds this year — including Tumbador’s delicate, complex sea salt caramels; fragrant, nuanced fig araq liqueur from a New Jersey-based company, Zachlawe, and one of the best kosher cheddars I’ve ever had, made by Royal George in Northern England — but there seemed to be fewer industrywide innovations.

“We already have pareve ham and every other permutation,” said Rabbi Eliezer Eidlitz, founder of the Los Angeles-based Kosher Information Bureau. Still, the kosher market is always growing.

Menachem Lubinsky, founder of Kosherfest and president of Lubicom, a marketing consulting firm active in the kosher market, cited a recent study by Cannondale Associates on Shopping Habits of Kosher Consumers indicating an increasing willingness to shell out serious dough for “gourmet” products.

And as in past years, the Kosherfest of 2006 had its oddities (the Kabbalah Energy Drink of 2005 comes to mind). I missed the assembling of what was billed as “the world’s longest soynut butter and jelly sandwich,” and couldn’t help wondering who would try to top the record. The sandwich looked forlorn up on its dais, like a bride deserted by her groom. (By the way, I.M. Healthy Original Creamy Soynut Butter, which is being marketed as a solution to those pesky peanut allergies so many kids have, is pretty good.)

This year’s Best of Show product was Najla’s Gone Nuts! It’s a spiced nut mix created by Najla Aswad, a Lebanese Christian married to a Jewish man. Aswad closed her successful catering business in Binghamton, N.Y., to focus her energies on her ready-made food products, including premium frozen cookie dough. I loved the fresh-baked cookies, but wished the nut mix was a bit crispier. Also creating a buzz were five Brandeis University buddies who started making beef jerky as a hobby and have now launched a line of what they hope will be the first kosher Department of Agriculture-certified beef jerky (the flavor was great and the kids were super-nice, but the texture and stringiness of their product need a little work).

Sometimes the fun comes from realizing that companies are actually listening to consumers. Many kosher cooks have lamented the absence of a ready-made pareve cake topping, and there was substantial buzz surrounding Manischewitz’s nondairy frosting, which unfortunately wasn’t available for sampling. According to a Manischewitz rep, the product will be ready sometime this month.

Too bad — I’m sure it would have been a great way to chase my fourth Empire chicken dinosaur-shaped chicken nugget.

Adeena Sussman is a food writer and chef living in Manhattan. 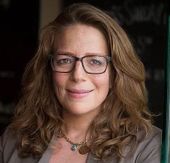