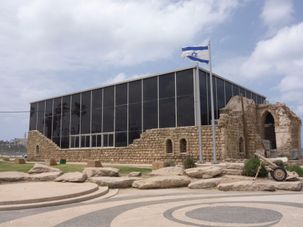 How Jaffa’s Etzel House Stands At Odds With History

On the border of Tel Aviv and Jaffa are the ruins of an old house overlooking the beach and the Mediterranean Sea, with an anomalous black cube rising from its remnants. This is the Etzel House, also known as the Museum of Jaffa’s Liberators. It is dedicated to fighters of the museum’s eponymous organization, better known as the Irgun in English, a Jewish militant group in Mandate Palestine led by Menachem Begin. Along with the nearby Hassan Bek mosque, the ruins are one of just two structures that remain from Manshiyya, formerly the northernmost neighborhood of Jaffa.