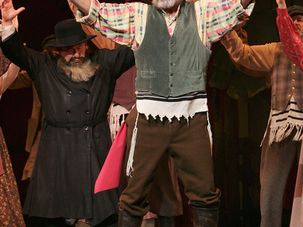 The timing for this “Fidler afn Dakh” is, at last, right today as 21st-century Yiddish American culture is itself “rooted and mature.”

Last month, in an unusual show of unity around “the fundamental principle of debate in a democracy,” some 113 scholars and intellectuals with a wide range of passionate opinions about the Middle East signed a letter to the New York Review of Books in objection to the abrupt cancellation of a planned October 3 talk on “The Israel Lobby and U.S. Foreign Policy,” to have been given by New York University historian Tony Judt. The signatories — among them, more than a few hawkish Zionists — rebuked Jewish organizations for producing “a climate of intimidation” that stifles open debate on Israel.

Tevye, Today and Beyond

Earlier this year, an unidentified video clip made its virtual way around the world. The recording — which soon turned up on the Web site YouTube — shows professional actors in Tokyo rehearsing “Shikitari,” or “Tradition,” the opening number in “Fiddler on the Roof.” The clip typically arrived in my email inbox accompanied by a terse comment of amusement: LOL — Internet shorthand for “laughing out loud.” What was so hilarious? Nobody said, but the answer was implied: How funny to see Japanese people as shtetl Jews, circling around in Jerome Robbins’s famous choreography in their tzitzit and babushkas.

Last February, I attended the Bet Shira Congregation in Miami during the synagogue’s official celebration of Tu B’Shvat, or the New Year for Trees. Festivities for this particular Jewish holiday usually involve the planting of trees, a discussion about the environment or some other similarly agriculturally themed event. But at Bet Shira, synagogue president Ron Rosengarten put on an old vest and a short-brimmed cap. Rabbi Micah Caplan pasted a long gray beard to his chin. And congregant Martin Applebaum donned a puffy-sleeved peasant shirt and stuffed his pants cuffs into the top of his socks. Applebaum also brought 20 rubber chickens to distribute among the audience so they could throw them into the air on the appropriate cue. This was no tree planting. It was a singalong to “Fiddler on the Roof.”

APPRECIATION Mrs. Plumm, the dotty yet dignified housemother of a New England women’s college dormitory in Wendy Wasserstein’s early play “Uncommon Women and Others,” welcomes her charges to tea by reciting a poem by Emily Dickinson. “The Heart is the Capital of the Mind,” she intones. “The Mind is a single State. /The Heart and

When Academic Freedom Is Kicked Out of Class

New York City schools chancellor Joel Klein should pay a visit to the City University of New York Graduate Center this week to see a telling and chillingly timely exhibit called “Activism and Repression: The Struggle for Free Speech at CCNY, 1931-42,” which closes March 6. Contemplating this chronicle of shameful blacklists against

New Generation of Polish Jews Insists on Future in Their Land

Daniela Malec’s blond hair, swept into a stretchy purple band atop her head, sprays upward like a fountain, giving her a perpetual look of amazement. Add her blazing blue eyes, and the 26-year-old Jewish activist looks punk prophetic. “What does it really mean to be a Jew?” she asks, naming the issue that fires her and about 20 other young

Home Is Where the Heart Isn’t

Estelle N’Gambi came to New York from Zambia four years ago to take a position as a live-in nanny with a family in Yonkers. She labored 18 hours a day, seven days a week, earning only $250 a month — and she had to sleep on the floor.N’Gambi’s story is an all too familiar one for domestic workers here in the land of opportunity.