Abbas: Peace Talks Are at an Impasse

Palestinian President Mahmoud Abbas said Sunday that he was holding Israel responsible for the impasse in direct negotiations, but vowed to continue to search for solutions that could yield to progress in the recently renewed peace process.

IDF To Blame Navy in Report on Flotilla Raid

An Israeli military report to be released today on the Israel Navy’s deadly May raid on a Gaza-bound flotilla is expected to accuse the navy of failing to sufficiently consider the possibility that the commandos would encounter violent resistance when attempting to keep the ships out of Gaza.

A video of captive Israel Defense Forces soldier Gilad Shalit was broadcast on Israeli television on Thursday, showing the gaunt soldier holding a Palestinian newspaper dated September 14, 2009. In the video, Shalit is seen saying that he was feeling healthy and being treated well by his captors.

Hamas representatives held a press conference in Cairo Wednesday evening following talks with Egyptian officials, and announced that they have accepted in principle an Egyptian proposal for a cease-fire agreement to end the fighting between the Islamist group and Israel in the Gaza Strip.

Israel and Egypt To Begin Negotiations on Gaza Truce

Israel and Egypt are expected to enter intensive negotiations in the coming days in an attempt to agree on a mechanism that will bring the fighting in the Gaza Strip to an end. Meanwhile, the cabinet approved Wednesday a continuation of Operation Cast Lead.

In Ground Operation, Israel Expands and Deepens Its Control of Gaza

Three Israel Defense Forces soldiers from the Golani brigade were killed and about 20 others wounded, one critically, after an errant IDF tank shell hit a building in which they were operating. The IDF is now surrounding Gaza on the three land sides and maintaining a sea blockade. The Gaza Strip has also been sliced in two in the area where the Israeli settlement of Netzarim once stood. 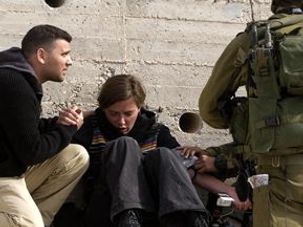 An innocent Palestinian family, numbering close to 20 people, in their home — all women and children, save for three men.

International donors pledged $7.4 billion for the Palestinians at a conference in Paris on Monday, a massive sum that beat the Palestinians’ own expectations, French Foreign Minister Bernard Kouchner said.