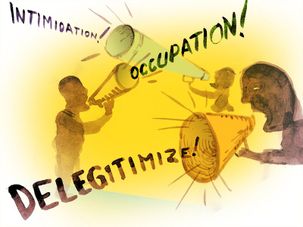 Shouting To Be Heard

Some inside the Jewish world have asked why a group of 14 young activists affiliated with Jewish Voice for Peace chose to disrupt Israeli Prime Minister Benjamin Netanyahu’s speech to the General Assembly of the Jewish Federations of North America in New Orleans. Five of these young Jews stood up during Netanyahu’s G.A. address to unfurl banners and chant “The occupation delegitimizes Israel” and “The loyalty oath delegitimizes Israel.”