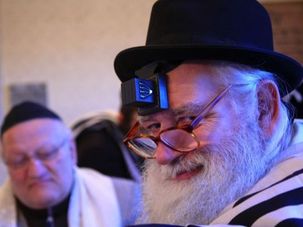 The Great Shtibl Revival of Hungary

A house in Budapest is at the center of a burgeoning global network of ‘little room’ synagogues. They appeal to unaffiliated Jews who may stay away from organized shuls.

A Ladino Singer Rebels –– With Flamenco

Yasmin Levy should be a very happy woman. The Jerusalem-born singer is perhaps the most visible and popular performer of contemporary Ladino music. Critics gushed over her 2001 debut album, “Romance & Yasmin,” and well-received performances at the World of Music, Arts & Dance festivals in Singapore and Madrid in 2004 and 2005

Anything Goes In Amsterdam

As Xaviera Hollander spoke to an admiring crowd of fans, friends and former lovers at New York’s Museum of Sex recently, it was clear she hadn’t lost her ardor for spinning titillating tales of sexual dalliance and decadence.These days, however, the former Penthouse columnist and author of the best-selling tell-all book about her life as a

A top anti-tax activist and White House ally is standing by his comparison of proponents of the estate tax to the perpetrators of the Holocaust, while taking the analogy further and dismissing his critics as “socialists.”“The Nazis were for gun control, the Nazis were for high marginal tax rates,” said Grover Norquist in an interview

Participants in a panel discussion sponsored by The New Republic and Saudi Arabia are claiming that their most hard-hitting criticisms of the kingdom were edited out of a transcript that appeared in the magazine.Billed as an opportunity to talk about Islam and its contemporary relationship with the West, the November 13 panel

Participants in a panel discussion sponsored by The New Republic and Saudi Arabia are claiming that their most hard-hitting criticisms of the kingdom were edited out of a transcript that appeared in the magazine.Billed as an opportunity to talk about Islam and its contemporary relationship with the West, the November 13 panel

Once Upon a Time — Once Again

Professional storyteller Roslyn Bresnick-Perry read a story about lighting Chanukah candles to 12 sets of eager ears several weeks before Chanukah. In her story, she and her mischievous cousin Zisel nearly burn down the family barn while conducting a menorah-lighting ceremony using a hollowed-out potato, a string smeared with chicken

Representatives for seven of the nine Democratic presidential candidates squared off this week on issues of importance to the Jewish community, ranging from health care and abortion to Israel and the war on terrorism.The “Democratic Presidential Insider Roundtable,” sponsored by the New York chapter of the National Jewish Democratic Council,

As the recently unveiled Geneva Understandings pick up international support — and settler leaders push their own model for resolving the Israeli-Palestinian conflict — yet another Middle East peace plan is being put forward. Abe Hirschfeld, an eccentric real estate mogul and senatorial candidate from New York, has a binational plan that, he

Eric Marx, Ha’aretz. and With Reporting by Elli Wohlgelernter in JerusalemDecember 5, 2003

Israel’s attorney general has declined to bring incitement charges against 250 rabbis who signed a religious ruling branding liberal opposition leaders as traitors for their role in the Geneva Understandings.The decision not to prosecute was hailed by Orthodox leaders in Israel and the United States, many of whom were vehemently opposed to the