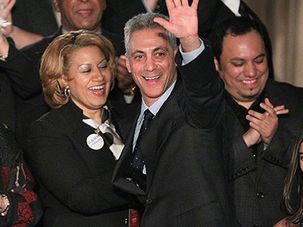 The irony of the election of the first Jewish mayor in the nation’s third largest city is that his religion seemed not to matter much at all. Rahm Emanuel made history by winning 55% of the vote February 22 to become Chicago’s next mayor, obviating the need for a run-off by blowing away the opposition.

EVANSTON, ILL. — Democratic U.S. Representative Jan Schakowsky was ebullient Tuesday night, sharing a beer with cheering supporters at her re-election victory party at a local restaurant. But Schakowsky’s revelry was interrupted by a reporter asking about her opponent’s efforts to make an issue of her support for the Obama administration’s Israel policy.

If those who sent bomb-laden packages to Chicago from Yemen were trying to terrorize the Second City, they did not succeed.