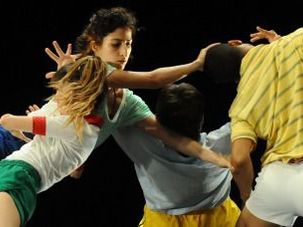 There’s no specific style to Israeli contemporary dance. But relentless creativity and impressive technical skill attracts attention from around the globe.

In Israel, Still Dancing After All These Years

Israel will be 56 on April 25. They’ve been 56 trying years, so you’d think she wouldn’t be dancing as much as when she was younger. But the country seems to defy all odds. Though she dances differently than she did when she was young, she still dances with uncommon vigor and creativity.When Israel was young, Independence Day was

A Legend Dances Through the ‘Rusty’ Years

‘At my age this shouldn’t be happening,” acknowledged Felix Fibich, the 86-year-old Yiddish dance star. Fibich is still in disbelief over his own upcoming schedule: From December 23 to 29, he will give daily dance workshops for six days in a row as one of the master artists presented at KlezKamp, the 19th Annual Yiddish Folk Arts Program

The People of Israel’s first choreographer was Miriam who, according to the Torah, was acclaimed for her breathtaking victory dance over the Egyptian warriors. I, for one, cannot shake the image of Miriam leading the Israelite women, timbrel in hand, through the magical crossing of parted waves.Our modern day Miriam is an unusual dancer in

Every night for two weeks this summer, thousands of eager Poles almost stormed the doors of the Silesian Dance Theatre, home of the 10th summer dance festival in the small town of Bytom, stepsister to the old steel-milling town of Katowice. There, they were treated to an unlikely alliance between Polish festival director Jacek Luminsky and