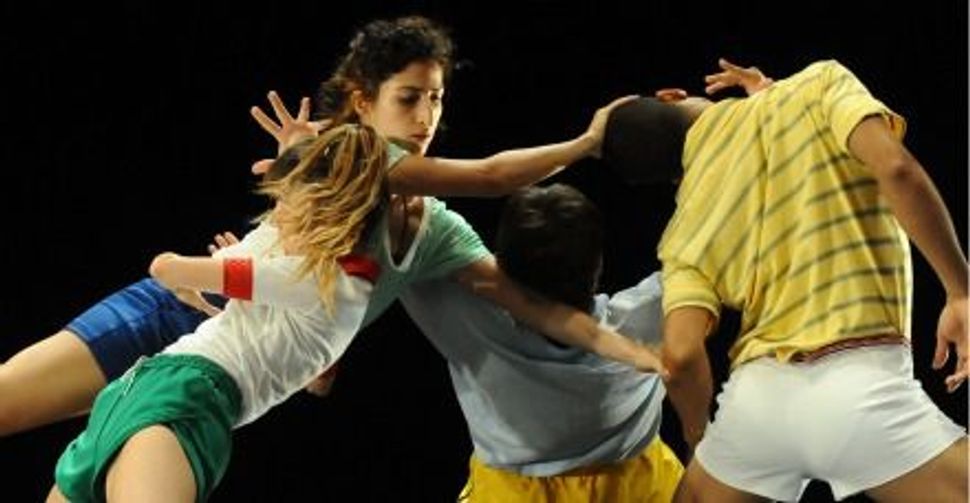 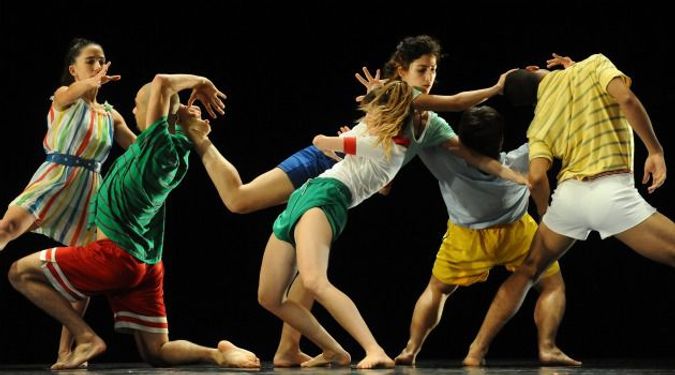 Renana Raz?s ?The Diplomats?: Even though multiple national anthems make up the sound track, the audience is requested to sit down, and so begins the piece. It?s one of several wonderful choreographies that debuted at the recent International Exposure dance festival in Tel Aviv.

In Neve Tzedek, the old Yemenite neighborhood of Tel Aviv, sounds of prayer from small synagogues in Ottoman period buildings are almost drowned out by the hubbub from bustling cafes and noisy tourist groups exploring alleyways and passing refurbished buildings outfitted with ground-floor galleries and small shops selling the newest fashions.

It’s a surprise, though, to turn into the walkway leading to the Suzanne Dellal Centre for Dance. It’s wide, and it opens onto the plaza, where neighbors and their dogs mingle with tourists and avid dance fans. Different-sized theaters and buildings with studios dot the premises, filled with an amazing variety of dance performances. This was especially the case from November 30 to December 4, when the center hosted “International Exposure 2011,” the 17th year for this festival of contemporary Israeli dance performances. It is now so popular, and Israeli dance so well respected, that in attendance were 161 curators, arts presenters and journalists from 34 countries in Africa, the Americas, Australia, the Far East, Europe and the former Soviet Union. They all came to see which Israeli dance and dancers they might engage for their upcoming seasons.

The intense days and nights of dance included more than 40 performances at five different venues within the center, augmented by “Off Exposure” performance by lesser names and some side trips away from the center to other theaters and studios in Tel Aviv, Jaffa and Holon.

Dance has always been popular in Israel, but it’s taken different forms. Before independence in 1948, there was fervor among kibbutz artists and new city dwellers to find a way that the people could express their excitement about reviving the land and finding their pride of place. Israeli folk dancing became a signature phenomenon of the new culture and was such fun to perform that it spread internationally.

Today’s worldwide interest in contemporary Israeli dance is in watching it rather than participating. Its performers are astounding for their reckless, highly technical accomplishments: Choreographers are daring and relentless in the ways they capture an ennui, along with the frustration and abandonment of the older generations’ idyllic hopes. Their works are specific to Israel, but speak for many beyond its borders.

Rami Be’er’s apocalyptic “Sacred and Profane,” for his Kibbutz Contemporary Dance Co., is one such dystopia. It begins with a lone dancer under a leaky heaven — sand pouring slowly from above, like a giant hourglass running out, its sand endlessly piling up all over the stage. Others come and go in the sand, and suddenly a giant kind of metal incubator hood lowers from a different part of the ceiling onto a table structure, breeding a fighter, caught underneath the hood. Like Cain, he sets out to haunt and hunt his Abel in a violent duet.

The most visually inventive of the performances was Inbal Pinto and Avshalom Pollak Dance Company in “Bombyx Mori.” Dancers oozed headfirst out of windows set randomly in an odd façcade of a house. Strings are pulled out to entrap one of the inhabitants in a cocoon structure and, at the end, strings ran from the rooftop to the edge of the stage, as if an enormous egg slicer had menacingly come to life to slice up any domestic life or space beyond.

Is there a specific look to Israeli contemporary dance? Not exactly, because so many are creating it, though it’s noteworthy how easily dancers execute difficult technical moves and stops, sometimes perched on one leg with the other raised at an extreme angle, or suddenly drop to the floor backward, or snake their spines in a fluid ripple that might go sideways, or search behind their bodies like antennae. The performers are also acknowledged for their creativity, since many choreographers credit them as “co-creators,” in their printed programs

A new pride in using Middle Eastern music and home-grown Mizrahi movement could be seen, especially in the work by the gorgeously sensual dancer-turned-choreographer Orly Portal and her company, featured in the opening evening performance and inspired by the belly-dance style learned from her Moroccan mother and grandmothers.

Ex-Batsheva dancer-turned-choreographer Arkadi Zaides, along with his collaborators, presented a bleak portrayal of the oppressed in his work-in-progress “Land-Research.” The sound includes recitations of 1960s women’s movement texts complaining of patriarchal systems that are given a new twist when a child/woman accompanies her hopscotch jumping with Arabic children’s ditties in front of photos of derelict landscapes.

After this despair, it was with some relief that Ido Tadmor’s duet “The Empty Room,” which he danced with Mira Rubinstein, showed a couple in their argumentative beginnings growing into touching dependence as they matured into believable old age.

Contrasting this was a duet of disgust and need between outstanding dancers Anderson Braz and Anat Grigorio in the in “Eternal Mission.” Wearing their muscles well, they writhed both together and separately, at the end literally shedding their body suits (designed by Daniel Erez) as if snake skins, perhaps to emerge as something new.

Grigorio was seen again as a stellar dancer in “Ship of Fools,” a trio with the slight Uri Shafir, who also plays a mean guitar, and with the chunkier, tattooed Sascha Engel. They were co-creators of a tale told through song, talking and strongly danced characters in Niv Sheinfeld’s choreography, with an amazing array of dance styles blended with dramatic direction by Oren Laor.

Shafir plays a seemingly innocent man who repeatedly shows his palms to the aggressive Engel. But with a trick of costuming (a b-boy bandana slips to eyes from forehead), the macho Engel becomes a blindfolded prisoner and he’s jeered at by his captor (a visual allusion to a recent Facebook photo of a Palestinian prisoner, posted by an Israeli soldier). The woman’s character morphs before our eyes: Sometimes she’s humorously shoved by the men from one preposterous ballet pose to another, other times she’s saucy or she admonishes the men like a schoolmarm. She alternately eggs them on and stops them as they torment each other.

The audience is beguiled into learning a hopeful, gentle song as Shafir pulls his chair downstage to play his guitar and teach the tune. When he asks for the song again, however, it’s no longer with a kindly hootenanny feeling. The audience is cleverly directed to stand for a ritual which disintegrates into a fake funeral. As unwitting bystanders, the audience members witness the characters in their waves of subjugation and violence. It’s clear that we are all still trapped on the medieval ship of fools.

Even in Barak Marshall’s newest work, “Wonderland,” with Marshall’s wit and seemingly innocent village characters, there’s barely a let-up. The opening words shouted from the audience sound funny: “It’s dark in here. Turn on the lights.” Into the light emerge people from some unknown place and time, going about their business in a madhouse of appealing gestures, yet everything in the town breaks down. A stretcher with a dying person goes nowhere, a bicycle pump is of no use and there is not much to mitigate the doom.

The finale of “International Exposure” was Ohad Naharin’s newest work for the Batsheva Dance Company, the home company at Suzanne Dellal. “Sadeh 21” played to a packed house with the large foreign contingent joined by many Israelis who consistently clamor to see Naharin’s work. In the piece, literally named “21 fields,” Naharin leads his watchers into a kind of prickly, parched place, offering no respite. I thought the troubling “Sadeh 21” was gorgeous, built choreographically as Naharin often does with one section a variation on another, following each other in quick succession, in this case numbered by titles projected on the short wall in the back: “Sadeh 1,” Sadeh 2,” “Sadeh 3,” etc.

Naharin achieved a surprisingly classical symmetry of overall order: The first sections of frantic, seemingly random movements were executed by 19 people walking into and then leaving the field of space, aborted by short walls cutting off the area to the back and sides. In the ending sections, their unmatched virtuosic and random movements were repeated to a screechlike keening, which made it seem as if the dancers were suffering. In the shadow of the walls there was a possibility of empathy with the crescendo of movements. It was as if the sound were a voice for the disenfranchised, those obscured by the walls.

The feeling that we might all be the ones walled in was broken, however, when we saw the dancers climb up over the back wall, dramatically pause, turn and then dive off the cliff, gloriously freed.

Near the entrance to Suzanne Dellal is a little bookstore called Sipur Pashut (Simple Story). An event there featured dance critic Gaby Aldor’s new book, “How Does a Camel Walk?” about her Viennese Zionist dancer grandmother, Margalit Ornstein, who in 1920 opened the first Expressionist modern dance style studio in Tel Aviv. Orenstein raised her twin daughters to teach and perform for the yishuv, the Jewish community.

Little could Orenstein suspect how this would develop. Others, too, contributed to the Israeli professional dance scene, including Batsheva’s development from its beginnings in the ’60s. But who could have predicted the spectacular performers and profusion of passionate, dramatic pieces that are contemporary Israeli dance, sought after by eager audiences here and abroad?