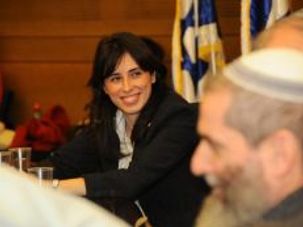 Is International Women's Day a Happy Day for Israel's Women?

Netanyahu Tasked With Forming Next Government, Will Meet Sunday With Livni

Shortly after Benjamin Netanyahu on Friday accepted a mandate to form Israel’s next government, the Likud Chairman arranged to meet Kadima leader Tzipi Livni on Sunday for coalition talks. Livni told Netanyahu by phone that he was well aware of her position and there was nothing preventing them from meeting. Both rivals had laid claim to victory after last week’s inconclusive general election.

Livni: Kadima Will Go Into Opposition

“Today the foundation was laid for an extreme right-wing government led by [Likud Chairman Benjamin] Netanyahu. This is not our way, and there is nothing for us in such a government,” Kadima leader Tzipi Livni told party members on Thursday, after 65 MKs announced their decision to support Netanyahu for the post of prime minister-designate

Likud and Kadima are in a neck-and-neck race to be the next Knesset’s largest party, according to the latest Haaretz-Dialog poll. According to the poll, It is now down to only two seats in Likud’s favor. In contrast, Avigdor Lieberman’s Yisrael Beiteinu party continues to surge: The latest poll, which surveyed 1,000 people showed it winning 18 seats, up from 15 last week. If this forecast proves accurate, Labor will be relegated, for the first time in its history, to the fourth-largest party, with only 14 seats.