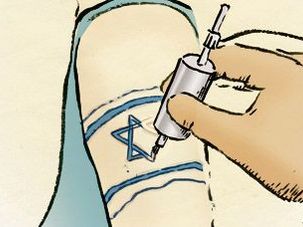 How Peter Trachtenberg’s decision to get a tattoo indelibly changed his worldview and interpersonal relationships.

A ‘Child of Daumier’ Confronts the 1990s

Jack Levine died at his home on Monday, November 8, aged 95. An American Social Realist painter who disliked the expressionism and abstract painting he saw become popular during his lifetime, Levine depicted, with visceral force, the social interactions between people. Often these skewered the powerful, as described in this 1997 profile and studio visit written by then arts editor of the Forward (and current executive editor of ARTnews), Robin Cembalest.

Welcome to the Chassidic Art Institute, the only institution devoted to teaching, exhibiting and promoting Chasidic art. Located at 375 Kingston Ave. (just down the street from the International Messiah Center), CHAl holds classes, distributes art materials, sends mailings, publishes catalogs and organizes exhibitions. It houses seven shows each year in its gallery (open Sunday through Thursday from noon to 7 p.m.) and sends many others on the road.

Eban Gets Plastered — With George Segal

Abba Eban has endured countless situations fraught with danger, discomfort and uncertainty, but none quite like the one he faced when George Segal wrapped his body in plaster-impregnated bandages. This was the first step in the making of the cast that was to become “Portrait of Abba Eban.” “It’s quite an ordeal, actually,” Mr. Eban told the Forward. “You’re surrounded. You just hope they’ll know when to take it off.”