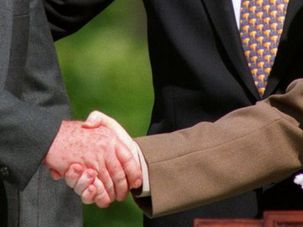 Are Jewish teachings to blame for the murder of Yitzhak Rabin? Simeon Kolko explores what we can do to prevent another sacrifice on the altar of religious fanaticism.

We are nearing the end of a time many like to refer to dismissively as the “silly season.” But for Jews, some of the antics on display during this year’s campaign should not just be blown off semantically that way, as if they had no wider repercussions for the health of the country, or our own community. American Jews are highly engaged in the political process, both as elected officials and shapers of the public agenda. What is—or should be—the Jewish significance of this involvement?

When Legislation Matches Our Best Impulses

This Monday marks the 30th anniversary of the passage of the Jackson-Vanik Amendment. This landmark legislation, which remains a stirring case study in the importance of human rights and moral idealism as an instrument of foreign policy, provided the impetus for the mass emigration of Jews from the former Soviet Union and helped propel the winds

Political Truth and the Rosenbergs

Fifty years ago on June 19, Julius and Ethel Rosenberg were executed after having been convicted of the crime of transmitting American atomic secrets to the Soviet Union during the 1940s. The Rosenberg case continues to evoke emotions, stir passions, raise disturbing questions and defy easy resolution. The discomfort stirred by this haunting