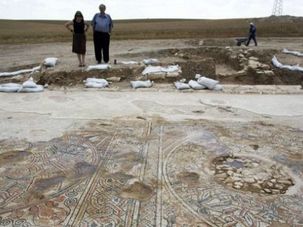 A magnificent 1,500-year-old mosaic floor has been uncovered by archeologists near Kibbutz Beit Kama in the south, the Israel Antiquities Authority announced Sunday.

Prime Minister Benjamin Netanyahu said Tuesday he had hoped the upcoming expiration date for Israel’s settlement freeze would not cause the Palestinians to talk out of recently relaunched peace talks, adding that peace talks had taken place for 17 years without West Bank building disrupting them in any way.