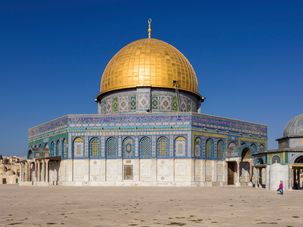 By Israeli law, Jews are not allowed to pray at their holiest site — a fact that Arabs use to inspire deligitimization and even terrorism.

What Unites Shiloh and Jerusalem

I have news for Prime Minister Benjamin Netanyahu: Not only is Jerusalem not a “settlement” — as he correctly noted in his speech before the convention of the American Israel Public Affairs Committee — but neither is my hometown of Shiloh.

Since independence 58 years ago, Israel’s political system has lacked a true center. This week, Ariel Sharon decided to try to find it, and in the process, rewrite the history of the Jewish state.The prime minister’s jettisoning of his Likud connections is more than just politics become personal on a scale not seen since David Ben-Gurion

This summer, Israel will withdraw its troops from Gaza and the northern West Bank and remove the 9,000 Jewish civilians who call those places home. While much has been written about Prime Minister Sharon’s disengagement process already, it is worth revisiting how this ill-advised decision was taken, for it holds a very real and threatening