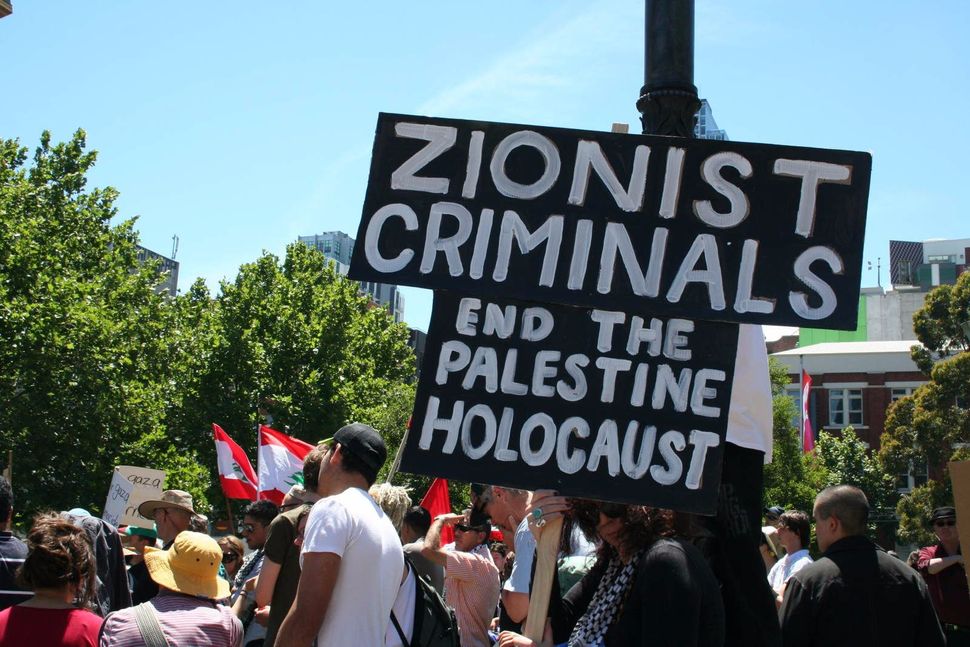 Many responses to my recent articles have boiled down to variations of the classic claim: “I’m not anti-Semitic, just anti-Zionist.” Here’s why most people who say that are kidding themselves.

To some extent, I am cautious about conflating anti-Zionism with anti-Semitism. Zionism is the revolutionary movement that asserts a Jewish right to statehood, self-determination, self-defense, and self-empowerment, especially in the historic Jewish homeland of Israel. Anti-Zionism is opposition to that movement and to the existence of the world’s only Jewish state, Israel. Many anti-Zionists take great care to avoid anti-Semitic tropes, and some are themselves Jewish. Some anti-Semites, for that matter, do not oppose Zionism for various political or religious reasons. Nevertheless, the sharp distinctions often drawn between anti-Zionism and anti-Semitism are problematic.

I should note that criticism of Israeli policies is not in and of itself anti-Zionist, much less anti-Semitic – one can absolutely believe in self-determination, self-empowerment, and statehood for the Jewish nation without supporting, for example, the settlement construction policies of Prime Minister Benjamin Netanyahu and his coalition. Furthermore, support for Zionism and support for Palestinian nationalism are far from mutually exclusive – on the contrary, the majority of Israelis and Palestinians believe in a two state solution with both a Jewish and a Palestinian state, and the oppression that Palestinians have experienced across Southwest Asia should naturally inspire empathy in Zionist Jews. My disagreement is not with those who are uncomfortable with certain Israeli policies (I am) or who support Palestinian nationalism (I do), but with those who oppose Zionism.

Ultimately, to be anti-Zionist but not anti-Semitic is to accept the existence of the Jews as long as we are dependent on non-Jews for our very lives. By opposing Jewish self-determination, anti-Zionists demand that Jews return to a diaspora condition in which we are minorities everywhere and are entirely subject to the whims of our temporary hosts. Jewish life before the state of Israel, in much of the world, was characterized by humiliation, subjugation, and massacres whenever such atrocities were in the interests of our host communities, and there is no reason to believe that the same situation would not arise again if we were to return to the pre-Israel global dynamic. Essentially, anti-Zionists who denounce anti-Semitism imply that Jews may live as long as non-Jews permit us to live, but no longer.

To be anti-Zionist but not anti-Semitic is to accept the existence of the Jews as long as we cannot mobilize politically. It is to say that we can participate as individuals in political systems built by and for non-Jewish populations, but we may not build our own political institutions or represent ourselves. We may vote in French elections, for example, but we may not establish a state in which we are the majority so that our communal needs are consistently met; in France, Jews have legal equality but not basic security. Anti-Zionism thus forever constrains our religion, culture, peoplehood, and safety to the limits that non-Jews set for us.

To be anti-Zionist but not anti-Semitic is to accept the existence of the Jews as long as we know our place. The millennia of Jew-hatred and oppression in Europe have left a deeply engrained conception of Jews as beneath non-Jews, as somehow backward and doomed to exist among and between other, more powerful peoples. Zionism is revolutionary in that it asserts a Jewish claim to equality – Jews will no longer accept an eternally degrading status, but rather will demand to function as a group with the same rights as all others, including representation on the international stage and the ability to choose our own leaders. All revolutions are met with conservative backlash, and in the case of Zionism that opposition includes Jews who are content with a diaspora existence, but that backlash does not make the Jewish claim to equality any less legitimate.

Finally, to be anti-Zionist but not anti-Semitic is to accept the existence of the Jews in theory but not in practice. As other states across Southwest Asia have disintegrated, groups like Daesh have massacred Shi’a Muslims, Christians, and Kurds of various religious backgrounds (especially Yazidis), while groups like the Iran-backed “Popular Mobilization Units” in Iraq or Hezbollah militants in Syria massacre Sunni Muslims. If the Jewish state were to voluntarily dissolve itself, as seems to be the suggestion of many American and European anti-Zionists, or if it were to merge with other states to become an unstable anarchy of rival groups like Syria, Iraq, or Lebanon, it would be inviting a similar wave of massacres against Jews by those who have promised to destroy us, from Hamas to Daesh and many more. I find it strange that American college students who know what happened when Europe drew borders around countries like Syria still suggest that American and European powers pressure Israel into merging with Palestine. If, as my anti-Zionist peers suggest, Israel were to stop defending its borders and cease to exist as a state, the (approximately) half of the global Jewish population that lives there would be immediately vulnerable.

In theory, one can be anti-Zionist and not anti-Semitic, but that is a more subtle distinction than it is generally assumed to be. One can support the continued existence of the Jewish people without supporting our rights to independence, political mobilization, equality in the global system, or self-definition. One can also value Jewish lives in theory without valuing them in practice. The thin line between anti-Semitism and anti-Zionism should be constantly critiqued, problematized, and challenged, lest it serve as a rhetorical tool to enable anti-Zionists to obfuscate the disturbing natural conclusions of what they advocate.