The Continued Creep Of Israeli Annexation Threatens Prospects For Peace 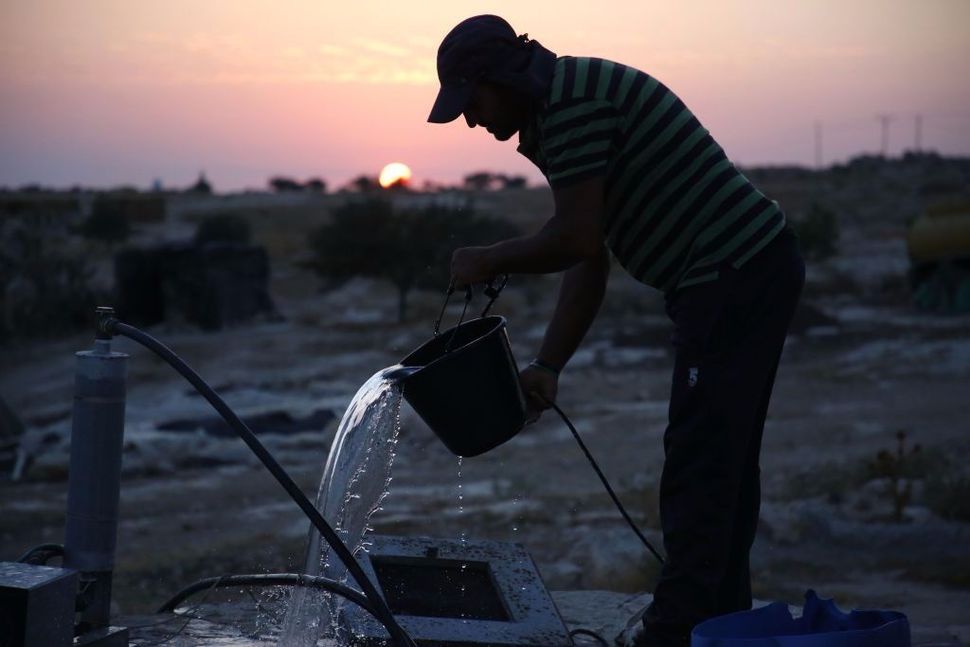 A Palestinian shepherd uses a bucket to get water from a well in the village of Susya south of the West Bank city of Hebron on August 19, 2017. Image by Getty Images

On October 29, Israeli ministers were set to vote on the “Greater Jerusalem” bill, which would have annexed several large settlements into the Jerusalem municipality. The vote was ultimately postponed, reportedly due to American pressure. But slower, less dramatic steps toward annexation are happening constantly — and for the most part, the Trump administration has been silent. With Netanyahu’s government in office, annexation is on the agenda, and those who care about Israel’s future will need to step up.

Sunday’s bill would have incorporated hundreds of thousands of Jewish Israelis into the city and barred 100,000 Palestinians from voting and receiving public services in Jerusalem. That’s a blatant attempt to shift the city’s demographics and eliminate hopes for East Jerusalem as the capital of a future Palestinian state. Only once the bill was up for a vote did American pressure finally come. The vote was postponed, but it could resurface at any time.

But while this bill was particularly egregious, other efforts to entrench the Jewish presence in the West Bank are ongoing. Defense Minister Avigdor Lieberman has announced plans to demolish the Palestinian village of Khan al-Ahmar, and the decision on the village of Susya could be released during the first few weeks of November. The full evacuation of both communities would result in significant cost to the people there, displacing nearly 350 residents, in a move nearly unprecedented since 1967. Both villages have been targeted by settlement movement activists hoping to expand nearby settlements and remove the Palestinian villages in the way.

Like the Greater Jerusalem bill, both demolitions are highly controversial. Khan al-Ahmar is in the E-1 corridor linking Jerusalem to Ma’ale Adumim, which has been internationally acknowledged as critical to the contiguity of a future Palestinian state. Susya has been under international scrutiny for years, with Senator Diane Feinstein and the State Department publicly opposing its demolition in 2016.

Now that Trump is in office, the Israeli government is testing whether it can cross what were previously red lines. If so, “creeping annexation” may be able to proceed at a sprint. Increasing demolitions would pave the way for further settlement expansion that could erode the chances of ever creating an independent Palestinian state alongside Israel—and displace untold numbers of Palestinians in the process.

Khan al-Ahmar and Susya have strong leaders and legal representation, and have garnered high amounts of international attention. If they are demolished, both villagers and settlers feel that other surrounding villages, such as Jabal al-Baba and Abu Nuwar in E-1 and Umm al-Kheir in the South Hebron Hills, might not be far behind.

Relying on the Trump administration to fight creeping annexation cannot be our strategy. And it is not the only option. If they were moved to do so, members of the US Congress and the American Jewish community could play a critical role in opposing and forestalling Israel’s harmful actions—which endanger its own future as a Jewish and democratic state.

Members of Congress could vigorously oppose the demolitions of Susya and Khan al-Ahmar and make clear that anything like the “Greater Jerusalem” bill will never be acceptable. The rest of us would need to provide political support — emphasizing that for the vast majority of pro-Israel Americans, these actions by the Israeli government are totally contrary to our values and our hopes for the country’s future.

It’s no secret that many American Jewish communal organizations have traditionally been uncomfortable speaking out in public opposition to the actions of the Israeli government. But the leaders of those same organizations should recognize that in our current reality, fighting for Israel’s future means standing up to its right-wing government and challenging an occupation that only perpetuates conflict and injustice.

After this summer, we now have a clearer picture of what that kind of advocacy could look like. As Netanyahu’s capitulation to the ultra-orthodox members of his coalition resulted in the collapse of the Western Wall prayer space and a general assault on Jewish pluralism in Israel, American Jews did not hesitate to vocally express their displeasure—up to and including refusing to continue support for an Israeli government that rejected them and their values. Underlying this response was the very real possibility that Israel’s unacceptable policy choices could seriously and dramatically affect the the next generation of American Jews’ relationship to Israel.

Under Trump and Netanyahu, annexation is on the agenda and Israel’s future and fundamental character is in more danger than ever. Americans have ways to push back and fight for an alternative path – but we have to act fast.

Eva Borgwardt is a leader in IfNotNow and is currently involved in the organization’s strategic planning process. She is a former national president of J Street U and is from St. Louis.

The Continued Creep Of Israeli Annexation Threatens Prospects For Peace