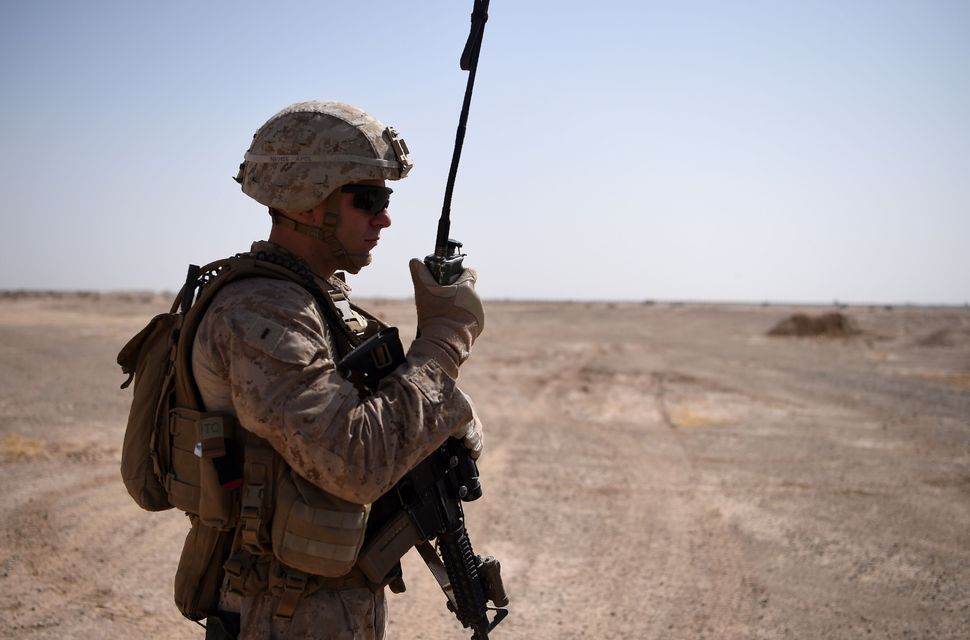 A U.S. Marine looks on as he talks on his radio as Afghan National Army soldiers clear the road during a training exercise to deal with IEDs (improvised explosive devices) at the Shorab Military Camp in Lashkar Gah in Helmand province. Image by Getty Images 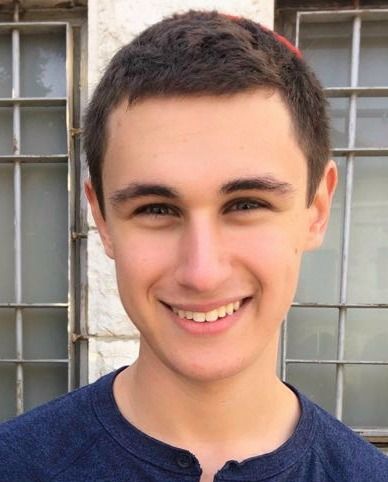 Ever since I was a little boy, I dreamed of joining the American military. As a child, my reasoning was expectedly juvenile. I wanted to have a uniform, I wanted to carry a gun, I wanted to be applauded during the 7th inning stretch. As I grew up, I developed more genuine reasons for wanting to join. As a Jew, the United States has given me so much, more than any other country could. I am blessed with the same rights any other American has. Thomas Jefferson was protecting me when he assured I had life, liberty, and the pursuit of happiness.

In high school, these military aspirations became more concrete. I learned to love my American history. I was taught to treasure the Constitution. The lessons I learned were invaluable, and culminated in the realization that I wanted to be a U.S. Marine.

Why the Marines, and not another branch? You wouldn’t be the first to ask. I want to be the best, and the Marines are just that. The most elite, most well-trained, most respected. I want to be tested, to be challenged. I plan on attending Officer’s Candidate School in Quantico, Virginia this summer, where the pass rate is 70%, compared to the other branches’ officer schools, which are all above 95%.

In my Modern Orthodox high school graduating class of 120, I had multiple friends join the IDF. More than 70% of my class is on a gap year in Israel now. Yet I am the only one that even expressed interest in joining the United States military.

As Modern Orthodox young adults, we’re taught to love Israel, as we should. I treasure the Jewish homeland. I’m a proud member of AIPAC, I’m involved with Israel advocacy on campus, I’m eager to defend Israel in the classroom. I believe that in our schools, through no fault of the schools themselves, students are led to the conclusion that if you serve, you have to serve in the IDF. I couldn’t be prouder of my friends in the IDF; I’m going to my best friends graduation from Tzanchanim (paratroopers) in January. But the fact remains that we owe a debt of gratitude not only to the Jewish Homeland, but to our American one.

I don’t believe the answer to this conundrum lies in trying to answer the question of are we Jewish Americans or American Jews. I consider that distinction dangerous to make. I am a Jew. I am an American. I am a New Yorker. I am a supporter of Israel. I am so much more. All of these identities helped bring me to the conclusion that I personally feel it is my obligation and responsibility, specifically because I am all of these things, to serve the United States in this way. 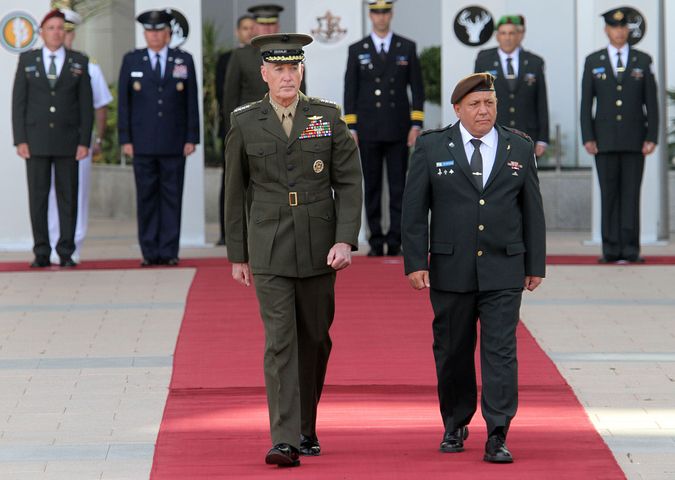 Chairman of the US Joint Chiefs of Staff Joseph Dunford (L) and Israel’s Chief of Staff Lieutenant-General Gadi Eizenkot (R) review the honor guard during a ceremony at the Defence Ministry headquarters in Tel Aviv on May 9, 2017. Image by Getty Images

What should our schools, synagogues, and communities do, if anything, to stress the importance of loving and serving not only Israel, but also America? For starters, I believe it crucial to teach Modern Orthodox young adults not only a deep and profound love for Jewish heritage, but also American heritage. This should manifest itself in a few ways. In school, we would always have a special assembly for Yom HaZikaron, the Israeli day of remembrance for fallen soldiers. Unfortunately, in most American, not only Jewish, circles, Veteran’s Day and Memorial Day are not days of national remembrance so much as they are sales opportunities for car dealerships and long weekends. We must encourage proper respect and admiration for those that choose to dedicate their lives for service of the Stars and Stripes, as well as the Star of David.

One of the biggest deterrents for Jews to serve in the US military is the issue of keeping mitzvot while serving. This is one that I myself am struggling with. I have accepted that I will not be able to keep up my traditional practices while serving, including Shomer Shabbos, Kashrut, and Davening. In OCS, training is 24/7, with no rest for Shabbat or holidays, and there is rarely downtime that could be used for prayer. Additionally, the meals in the chow hall are not kosher. However, after talking with rabbinical authorities, I have concluded that I am comfortable with not keeping these practices, as the opportunity to serve my country is one that I would not feel right passing up on.

So this summer, God-willing, I will attend OCS for six weeks. I will return next summer for another six weeks. If I pass, when I graduate college I will be offered a commission as a Second Lieutenant in the United States Marine Corps. When that day comes, after taking my oath, I will say the Shehecheyanu, the prayer thanking G-D for bringing me to this accomplishment. I will say this blessing, and take my commission, as an American, a Jew, and a new Marine.

So while most Bubbes and Zeidys dream of holding up pictures of their grandkids with briefcases in their hands or medical coats on their bodies, bragging about their latest case, or the lives they just saved, in four years time, B”H, my grandparents will point to a picture of me with an M-16 around my back and say to their friends, “That picture? Oh, my grandson’s a U.S. Marine.”

Noah Lang is a freshman at List College, The Joint Degree Program between Columbia University and JTS, and will graduate in 2021. He plans to major in Political Science and Modern Jewish History.