Jews And Arabs Can Break Bread Together — So Why Can’t We Talk About The Conflict? 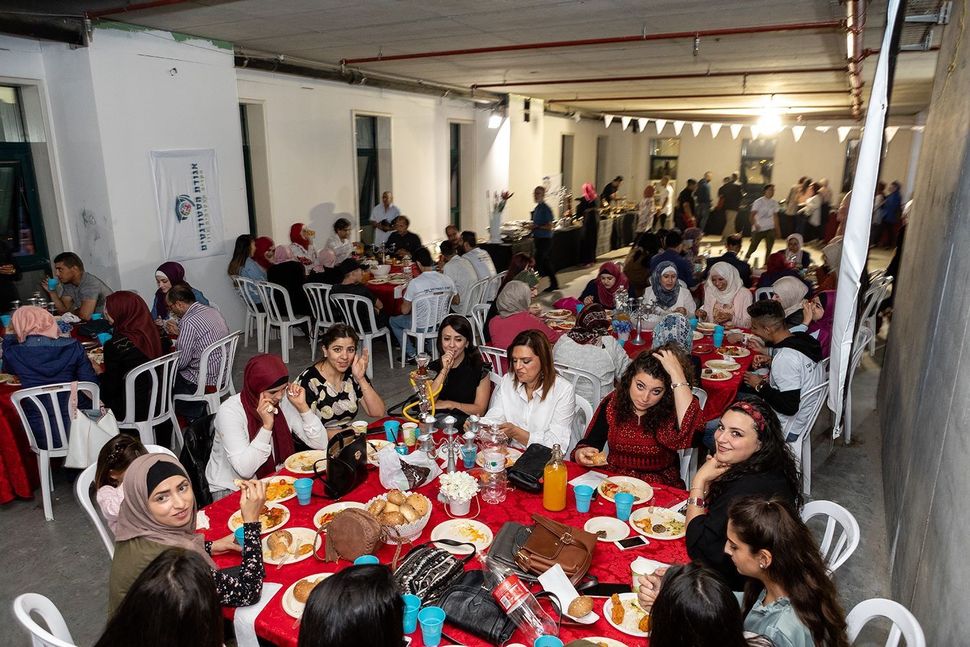 Scenes from the Iftar at Ono Academic College. Image by Courtesy

Last week, I sat with my students and colleagues at an exceptional student-led Iftar, the festive evening meal that breaks the Ramadan fast. Looking around at the mixed tables and watching everyone genuinely enjoy themselves over food (which was glatt mehadrin kosher food to accommodate Orthodox students and teachers), music and conversation, despite the longstanding conflict between Jews and Arabs, I felt a sense of calm. Everything appeared so simple and anything seemed possible. The generosity of heart, spirit and mind was pervasive, creating an unusual openness that led to an invitation of the “other” into a space where they are rarely accepted. The inclusive scene made me wonder, why can’t we do this more often?

The second law of physics explains that two solid objects cannot occupy the same space at the same time. It is a straightforward concept that appears to be self-evident. At times, however, I wonder if the same rule applies to different social groups. In the case of Israel’s Jewish and Arab populations, the question is if we can both occupy the same geographical space at the same time. Is it possible to live in coexistence with each other given our dueling narratives? What is it, exactly, that we are aiming for in our shared future? What would a shared society even look like here, and toward what goals can we aspire?

This is the conversation that Israel’s Jewish and Arab residents so desperately need to have. We talk constantly about the need to respect the other side’s narrative, but that respect is so often missing from the equation. The conversations that have taken place thus far have largely dodged the issue that stands between us and our ability to come closer to any kind of solution: We both fantasize that the other will somehow magically disappear and stop intruding on our dreams of having a home that is just for us.

And we must also appreciate the magnitude of the emotions that this land elicits, and reflect on it. This Biblical land within the Biblical ethos of the zero-sum game is prevalent in our psyches. Our resistance to dealing with the other is deeply related to our elemental sense of coming home. We constantly feel that the other is taking something away from us, and in Israel, too often that other is almost anyone who disagrees with me.

Many Jews believe that Israel is the Jewish homeland. However, Israel’s Arab population also sees this place as their homeland. If I were to come into your home and say that it was mine, would you just agree to share it with me? We may be generous to guests, even when they are uninvited, but when the guest makes himself at home and has no intention of leaving, the spirit of generosity dies quickly. Here in Israel, both Jews and Arabs look at the other as the uninvited guest who has long worn out his welcome.

Though we have grappled with this issue for decades, we are no closer to developing a blueprint for creating a space in Israel that is sufficiently livable for all of us. It is a seemingly impossible task, as our complex circumstances and history have constructed a mutual distrust that sits like an anchor just beneath the surface of our society. Such things do not dismantle quickly or easily.

There are tools that we can use to start the process of breaking up the current narrative of constant conflict and rebuilding from its rubble. In many conflict resolution theories, it must begin with a mutual understanding — that the other’s narrative is legitimate, and their subjective experience must be honored. However, in Israel, both sides see the other’s narrative as a direct threat.

When I’m teaching, I see my Arab students struggle under the burden of the unbudging status quo that our shared conflict has placed upon them. These Arab students are wondering if there is space for their identity as a minority in Israel, and they’re trying to understand how they can succeed here. They deal with discrimination and the deep wounds of distrust that has been sown between our opposing sides for decades. My constant fear is failing to reach these young, promising students with anything that will offer them substantive hope. In the vacuum of hope’s absence, I also fear that extremists will step in where Israel has failed and offer an alluring illusion of purpose that will highlight anger and pain while stoking the fire of resentment against their Israeli counterparts. It is a frightening vision of our shared future, and it is one that we are already familiar with in our present.

While no conversation between us should be considered frivolous or irrelevant, it is important to understand that we must speak to each other on additional levels. We need to be brave and willing to be disturbed to our core in order to understand the other side’s perspective, even when it challenges our own closely held narratives. Having that conversation is the first step to being able to see ourselves in the other, and this requires a generosity of spirit much like what I experienced at the Iftar.

During Ramadan, people wish each other a “Ramadan Kareem,” which roughly translates to “Generous Ramadan.” This spirit was certainly palpable at the Iftar. How can we share this spirit of generosity beyond Ramadan, and between more than two people on the same side of a conflict? When we can do that, we will finally summon the courage necessary to be truthful with ourselves and ask if having our place means that the other can’t have a place alongside us as well.

Two objects may not be able to occupy the same space at the same time, but we are people, not objects. As such, we have the God-given ability to build, create, change and make decisions. We are inherently flexible and adaptable. We can decide to make room for the other, and we can build a shared future together, even without an exact blueprint of how it will look.

When I awoke the morning after the Iftar, to all of the daunting challenges of the day, I had a feeling that I cannot and do not want to shake. It is a feeling that we could all do better.

Jews And Arabs Can Break Bread Together — So Why Can’t We Talk About The Conflict?