Yes, taking our hands off the wheel can lead to magical parenting 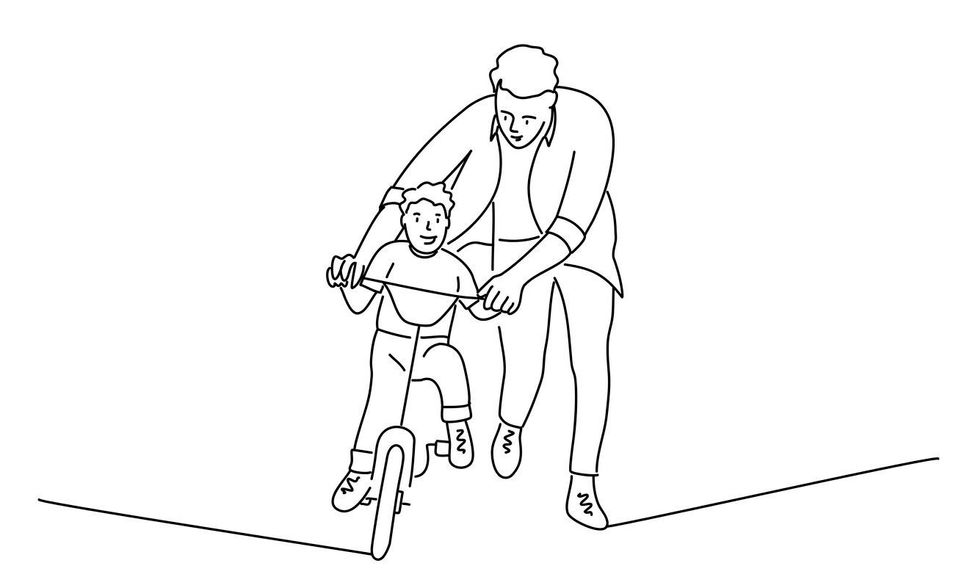 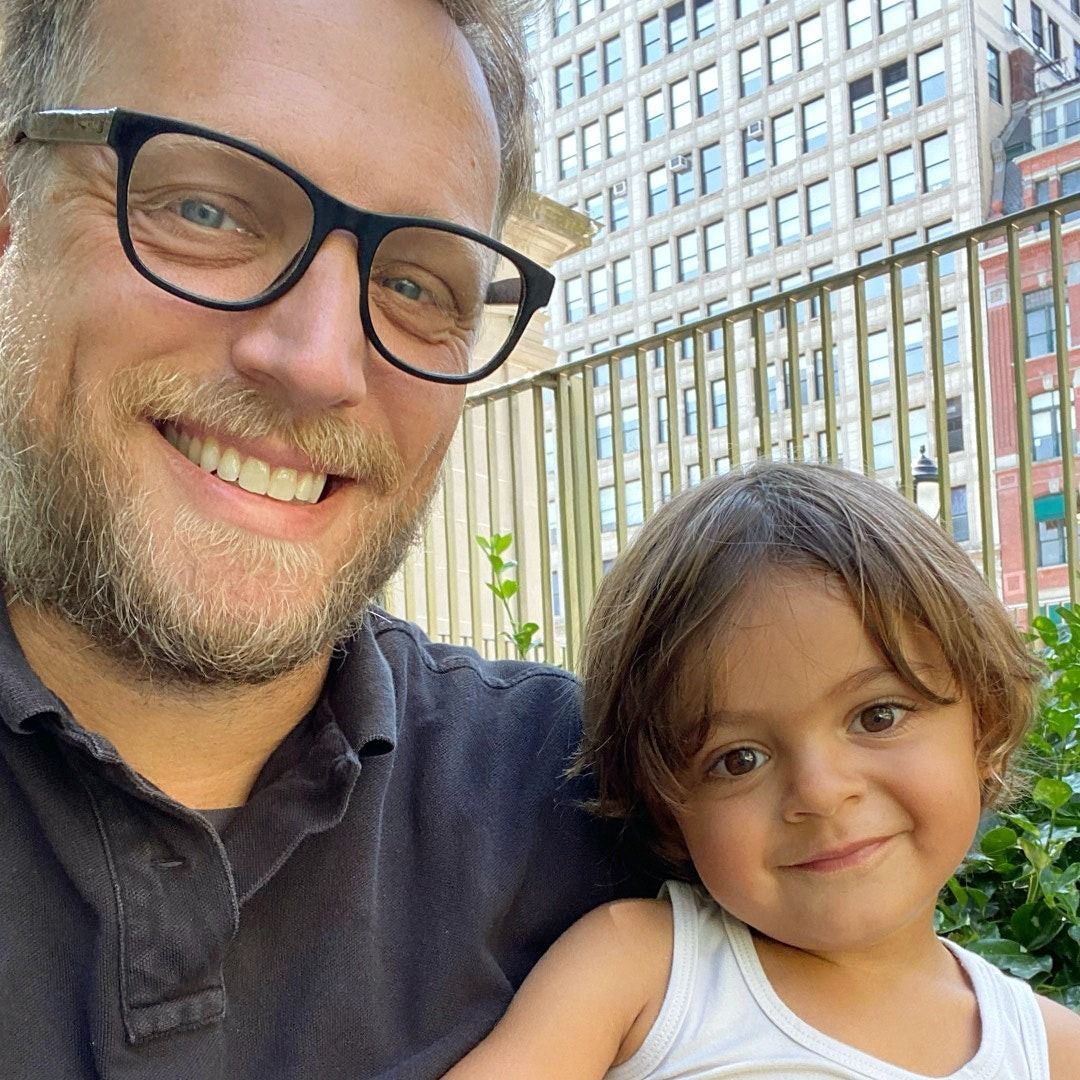 It has been said that “no other work transcends that of righteous, intentional parenting.” As caregivers, we have been guided to believe that we can — and we should — imbue our parenting actions and words with a sense of purpose, with a preferred outcome. Want our kids to love reading? Model sitting down with a book more than you do picking up your phone when they’re in the room. Wish our kids had more empathy? Engage with them less about how their actions might be right or wrong and more about how what they have done might make another person feel.

How empowered we are. We have the ability to truly mold our children as long as we remain conscious, shifting consistently into “intentional” mode. Every gesture, every comment can steer behavior and personality if we just put in the effort.

And while that is a practice worth practicing for the most part, it’s far from fool-proof. Intentions are often unclear. Co-parents don’t always share the same intentions. And kids aren’t always in the mood for even the best of intentions. Our son, Cielo, when faced with an underscoring of intention from his dads, has been known to say, “I don’t want to hear even a single noise” effectively blocking the lesson to be learned.

Last month, my family and I moved from New York City to Boston. And instead of seeing NYPD vehicles and NYU trolleys from our apartment windows as we did on Third Avenue, we now get to see boats — lots and lots of boats: dinghies, tugboats, lifeboats, sailboats, speedboats, ferries, yachts, liners, etc. Cielo is, like any three year old, obsessed. In the first couple of weeks in our new home, he would stand in front of the living room window screaming, DADDYYY! PAPAAA! Come! You’re going to missss it! — with every passing boat. Marine radar had nothing on him.

One afternoon, between Zoom calls and Zoom calls, I looked up from my work to see a massive oil liner inching past our windows. I took a video, added the chorus to “My Heart Will Go On” as a soundtrack, and published it as a reel on my Instagram. “Today’s View,” I captioned the post. Later that day, when Cielo came home from school, I showed him the content, knowing he would get a kick out of seeing what was then the biggest boat that had come through thus far.

Explaining why the music, I told him there was once this very famous boat that sank a long time ago and they made a movie about it and that this was the song from the movie. In one ear out the other, I thought. 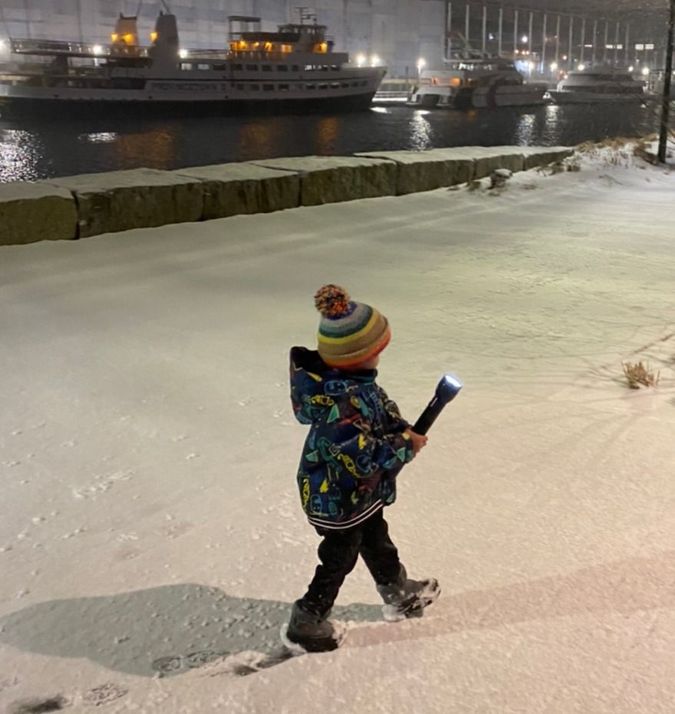 Neither rain nor snow keeps Cielo from ship seeking. Courtesy of Ariel Foxman

Far from it. Unexpectedly — and unintentionally — I had triggered deep, deep interest somewhere in Cielo’s being. He began asking questions, lots of questions, about the “famous boat.” Why did it sink? Do other boats sink? Was that trash in the water he saw the other day part of the Titanic wreckage finally coming to the surface?

His curiosity about the ill-fated 1912 luxury liner has been and remains unquenchable: We have repeatedly watched National Geographic CGI videos about the sinking. We have sought out the best Titanic fan videos –- yes, it’s a thing for adults, too –- in which animators imagine all sort of fantasy sinkings, some during the daytime or some at sunset. We have regaled him with bedtime stories about the ship’s captain and of course, of Jack and Rose — who alternate between a real-life couple or a couple of stowaway mice, depending on Daddy and Papa’s mood. We have explored local snow drifts as if they were icebergs. And we have even played him Britney Spears’s “Oops, I Did It Again” because of its Titanic-themed interlude. (Cielo has rightfully been informed that the exchange he hears is actually a recording of the Jack talking to the Rose.)

I keep asking Cielo if he is asking about the famous boat because it frightens him or because he likes it. Likes it, 100% of the time. (After all, we have assured him that (1) new ships never sink and (2) everyone got out of the Titanic alive. Lies, comforting lies.)

Just yesterday, Cielo asked me if we could get him a toy Titanic. Would this be a short-lived toddler phase — see Paw Patrol, Thomas the Tank Engine, and other dabbling now in his mercurial wake — or would this spark a lifelong interest in ships, in engineering and/or in late-nineties Céline Dion? Time will only tell, for sure.

What I soon won’t forget however is how indelible the off-hand has been. While I am sure I will continue to intend to intend my way through parenting, I will also ease into the knowledge that we are all parenting all the time. And that perhaps some of the biggest impression we make on our kids is when we aren’t trying to do so at all. Near, far, and wherever you are …

Ariel Foxman is an award-winning editor, writer, and gay dad. This column is a part of his modern-parenting newsletter “ABBAPAPA”, which you can subscribe to on Substack.

Ariel Foxman is an award-winning editor, writer and gay dad. This column is a part of his modern-parenting newsletter “ABBAPAPA”, which you can subscribe to on Substack.

Yes, taking our hands off the wheel can lead to magical parenting