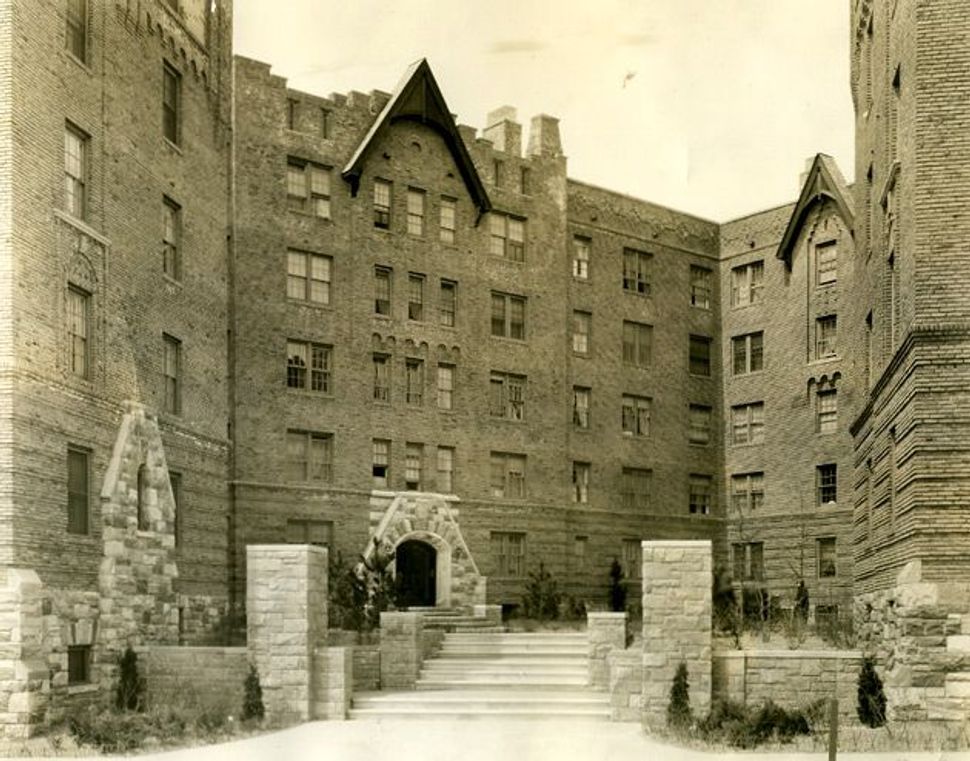 Community Living: Amalgamated Houses, above, was among the four cooperatively owned housing developments that Jewish immigrants built during the 1920s. These developments are the subject of a new film by Michal Goldman. Image by Forward Association

In the mid-1920s, a group of immigrant Jewish factory workers decided that they’d come this far for something better than the slums they inhabited. So pooling resources, they orchestrated the construction of four cooperatively owned and run apartment complexes in the Bronx, with practical goals for a better quality of life, and idealistic visions of a transformative way of living.

Thousands lived in the Amalgamated Houses, (built by the Amalgamated Clothing Workers union), the Sholem Aleichem Houses (built by Yiddishists), the Farband Houses (built by Labor Zionists) and The United Workers Cooperative Colony (built by Jewish Communists) had their own styles of management and ensuing rivalries, though they shared the same aspirations. But it was the tenants of Communists Colony — “The Coops,” as they came to be known — who followed these aspirations to the fullest extent, and who are the subject of an eight-years-in-the making documentary, “At Home in Utopia,” written and edited by Michal Goldman.

Goldman, the founder of the Boston Jewish Film Festival and president of the Filmmakers Collaborative, spoke recently with Forward contributor Sarah Kessler about one group’s grasp at a Communist American Dream.

Sarah Kessler: What drew you to this story?

Michal Goldman: I’m very interested in radicalism, and what happens when people try to live their ideas, their ideals. And I’m interested in the notion that thousands of rather poor immigrants — Jews, many of whom didn’t speak much English — could manage to pull off four big apartment complexes. It’s astonishing.

Seeing how the communal life would unfold, I immediately thought this was very rich for me. For a filmmaker, it’s a very interesting challenge to make a film about a community, as opposed to individuals — the whole shtetl, not just the mayor. I knew I wanted the buildings to be almost a character in the piece.

What was life like in the Coops? And would you have wanted to be a part of it?

Yes, I imagine that I could have grown up there. And when I go, and I walk around, I try to imagine myself there, and it’s not that hard. … There was a cafeteria where you could eat, owned by the cooperative — and if you didn’t have the money just then [you] could sign a little chip and pay what you could at the end of the month. At the beginning — not during the Depression — there were cooperative stores in the basement of the buildings: a meat market, a tailor, a gymnasium, a photography club. It was an extremely alive place.

How big a role did Communism play?

Many of the adults were apolitical, but try to imagine any big apartment complex … where a quarter of the people are card-carrying members of the Communist Party. Its real name was The United Workers Cooperative Colony, but everybody called it the Coops, some called it the Commie Coops. The local police used to call it Little Moscow. There was clashing with the law, especially as the Depression hit. Around 1932, landlords would try to evict people from their apartments; people from the coops would come try to stop that.

Did they achieve their political goals?

They got unemployment insurance, which didn’t exist before. They got 24 states to put emergency legislation in place that prevented mortgage foreclosures.

These people were extremely well networked; they knew how to act collectively, they were very confrontational – they poured out to the streets at drop of a hat. They were extremely well organized and could respond collectively to a crisis, rather than just feeling terrified and isolated. I think that some of the most radical people in the coops, anyway, saw in the Depression an opportunity to change capitalism, to try to do something really big.

So were tenants coerced into joining the Party?

No no, not at all. Within the party itself there was a tremendous amount of infighting. Many schisms. But it was not coercion — not coercion but a culture, dominated by the spirit of these people.

The Coops had a library with 20,000 books in it: Yiddish, Russian, English — all the literature was progressive. They had an auditorium with all kinds of concerts — Pete Seeger remembers coming and playing — or some people remember hearing him there. … There was a Yiddish after school where lots of kids went and studied and learned Yiddish. They had a playground across the street and an elementary school three blocks away — the parents went to City Hall, demonstrated, our kids have to travel too far — and they got it built.

And on May Day, almost everybody poured out of the Coops, kids did not go to school. They took the subway downtown and they marched in the May Day Parade. Teachers at the school would say, what’s wrong with you, you don’t stay out of school on the Jewish holidays. And the kids would say, this is our holiday.

Were all of the Coops Jewish?

I was drawn to the Coops because they were so driven in terms of their idealistic commitment to a certain agenda. And so very early, starting in the 1930s, they racially integrated. None of the other coops did that: They only integrated racially when they had to.

Even though they didn’t take in very many, there were intermarried couples. [I]t was the only place in the Bronx where that was true, where blacks could live with whites and be comfortable. For me that was just so moving, and I wanted to explore it. It seemed like a missing chapter, in a way, of American civil rights history. They were very involved in the issue of black, racial civil justice.

Although there was pushback from outside the party. Everyone was fine at a token level, but when these young Communists returning from World War II and tried to push for more, something real, there was quite a lot of pushback from older people. We don’t have anything against black people, but we built this place as a haven for Yiddishkeit.

What role did religion play?

They were very secular. Religion was frowned on. Children weren’t bar and bat mitzvah. The way you could tell that earlier era was over, later in the 60s, was when you began to see children having bar mitzvahs. The Jewish identity for them was language-based, about Yiddish, about social values. About social justice. And being somebody with a strong working class consciousness. And having a sense of your own history. So there was still resistance to intermarrying.

Did the next generation understand and continue the dreams of their parents?

After [The Coops] went into private ownership, people still stayed there. They were very well organized as tenants, did all the things they’d done before.

The children were formed by it, emotionally and intellectually, and then they went into the world. … Some wanted to live in the Coops, but because it was no longer a cooperative and no longer managed by the residents, they couldn’t control so easily who lived there.

I had a number of people say ‘if we could have we would have’. But the Amalgamated on the other hand, which was so brilliantly managed, after World War II, they built a veterans building exactly for young people returning from the war, sons and daughters of the Amalgamated, so there are people in the Amalgamated who’ve been there for four generations.

What is it now?

It became a place with a lot of drugs, a lot of crime — in the mid 70s, deep into the 80s. And then it kind of turned around. It’s a place that is quite run down in terms of what it looks like; its been land marked, historic landmark. It’s still privately owned, with lots of Section 8 housing. The residents are Cambodians, Vietnamese, Latin Americans, Caribbean, African Americans, anyone who is an immigrant to America.

The central areas that used to be beautifully landscaped by the Coop gardener — now the tenants grow things. It’s the middle of the city but they have a lot of space, its lovely.

How do you think the story of the Coops resonates today?

The main thing is, in America, could working people collectively do this for themselves? Could union pension funds, for example, be used again to build affordable housing for working people, [housing] that felt like a community? That’s what I’m hoping will be one of the questions this film raises.

There’s also the fact that the people in my film — they did what they did in the 1920s which was an economic boom, like the one we’ve just experienced ourselves — they built it in ’26, moved in ’27, and the Depression hit almost immediately. It’s then very interesting to see how they responded to it. So I think that there’s a kind of parallel that has emerged in the past year, which I didn’t expect when I started working on the film.

“At Home in Utopia” premieres on PBS on April 28th. For more information click here.