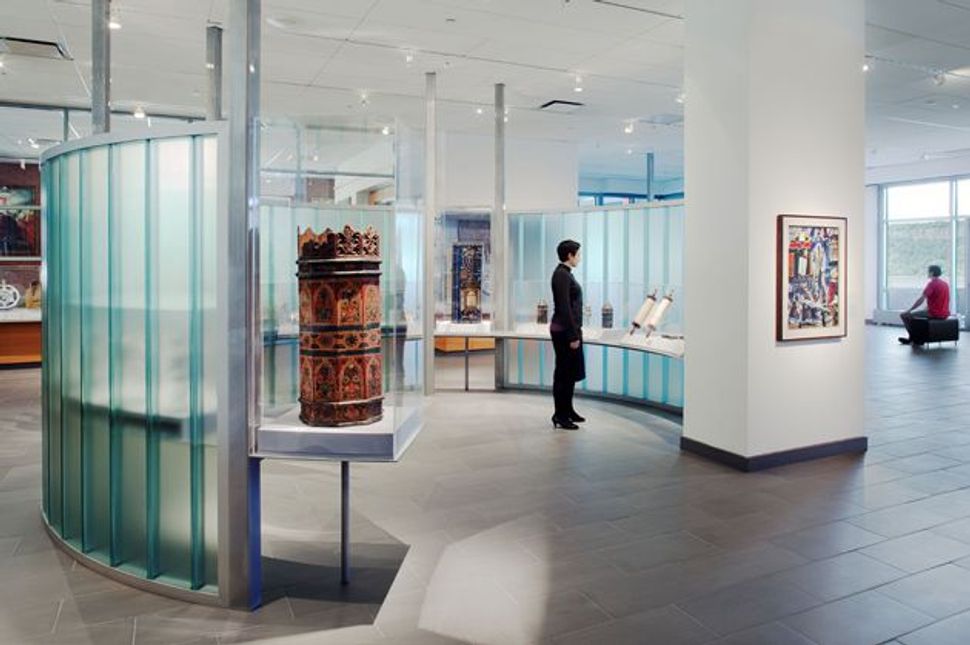 The sparkling glass walls of the new Derfner Judaica Museum look out across the Hudson River by way of a sculpture garden on a rolling green lawn. Look back, and you see the impressive contemporary art collection of the Hebrew Home at Riverdale. The museum’s clean, modern design, by architect Louise Braverman, looks to the future as it displays the historic pieces of the inaugural exhibition, Tradition and Remembrance: Treasures of the Derfner Judaica Museum. The theme — the importance of collective and individual memory — is reinforced throughout the exhibition by both showing the rare objects alongside their stories, and by the associations they trigger in viewers. 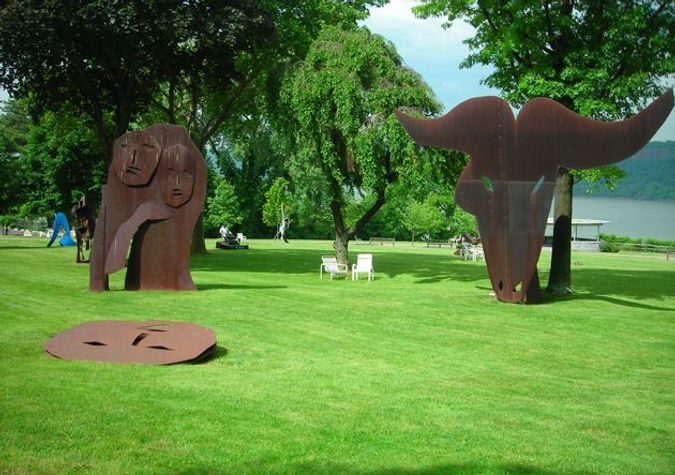 On display are 250 ritual objects from communities around the world. The first section is “Bezalel.” The Jerusalem-based school, founded in 1906 by Boris Schatz to create a Jewish national arts movement in Palestine, melded biblical images and motifs with Eastern techniques and Western arts and crafts influences. The first object in the exhibit, an early Bezalel Hanukkah lamp, shows Judah Maccabee purifying the Temple. Others incorporate Hebrew text from Psalm 137, adjuring Jews to remember: “If I forget you, O Jerusalem, let my right hand wither; let my tongue stick to my palate if I cease to think of you, if I do not keep Jerusalem in memory even in my happiest hour.”

The New Bezalel School for Arts and Crafts, as the school was called when, in 1935, it elevated modernism over the earlier eclectic style. A Hanukkah oil lamp by Ludwig Yehuda Wolpert, a New Bezalel instructor, reflects the influence of the Vienna *Werkstätte *(Workshop) and the Bauhaus on the German-born and -trained artist, who later taught in New York at the Jewish Museum’s Tobe Pascher silver workshop. In Wolpert’s design, the Hebrew text becomes the actual structure of the lamp. 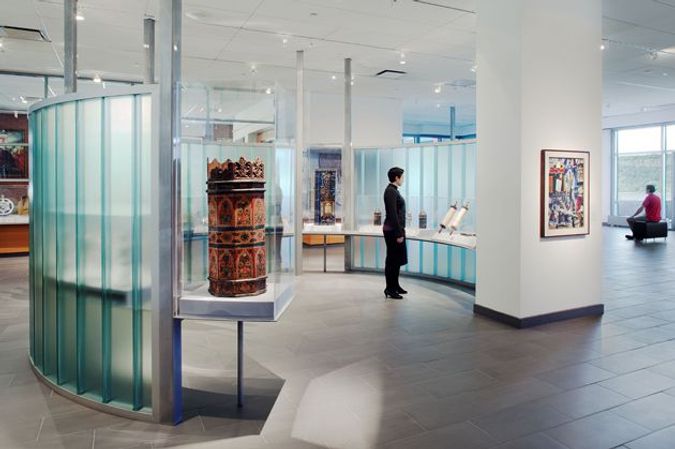 “Wolpert was the first silversmith to bring modern style into Judaica,” said Bernie Bernstein, who studied with Wolpert at the Jewish Museum. Bernstein’s modernist rosewood, silver and partially gold-plated Torah shield is included in the exhibit’s “Torah” section, which features synagogue objects from many communities and periods, including a 19th-century wooden Decalogue with rampant lions. Made for the original Hebrew Home for the Aged in Harlem, the piece was also shown at the American Folk Art Museum in a 2007 exhibition highlighting the ritual craftsmen who carved America’s carousel animals.

In “Shabbat and the Holidays,” an exquisite late 19th-century velvet matzo bag is embroidered in fish scales and metallic thread, made by residents of the Girls Orphan Home in Jerusalem. The recently restored object is “beautifully put together, a major work of art,” said noted textile artist Ita Aber. A matzo bag that Aber made in the 1960s recalls the Holocaust with a fist, an outstretched hand and the word “Zkhor” (Remember) boldly embroidered on muslin.

The Judaica collection was largely donated in 1982 by Ralph and Leuba Baum, who are remembered in a section titled “The Baum Legacy.” In pride of place is the singed Torah scroll Ralph found in 1953, when he visited Elmshorn, Germany, the town he had fled in 1936. It is one of the few Torahs to have survived Kristallnacht.

A collection of Torah ornaments from Meerholz, Germany, recently drew Meerholz historian Hans Kreutzer to the Hebrew Home to give a talk on the history of the Jews in his town. “It was a touching thing for residents who live here. They were all talking German to each other,” said Susan Chevlowe, chief curator and museum director, who is in charge of the Hebrew Home’s vast contemporary collection, much of which is on permanent display throughout the 19-acre campus.

The collection is impressively extensive, important and open to the public. Among the nearly 5,000 works in the contemporary and modern collection are Andy Warhol’s “Ten Portraits of Jews of the Twentieth Century” and William Wegman’s Cinderella series, as well as works by Louise Nevelson, Richard Serra, Christian Boltansky, Frank Stella, Alex Katz, Amy Cutler and Diego Rivera, to name a few. The expansive sculpture garden features works by Menashe Kadishman, Reuben Nakian, Joel Perlman, Zigi Ben-Haim and Herbert Ferber.

In addition to the pleasure it brings residents, art is “a remarkable inroad, like IM’ing the brain,” said Robin Dessel, director of memory care services. “Looking at or doing art engages both hemispheres of the brain. The creative part isn’t held back by reservations of someone who has cognitive ability.” Nearly 60% of the Home’s 875 residents have some form of memory disorder. “They make associations with past experiences — with a Torah, or a painting of a Cohen and a boy,” Dessel said, referring to the museum’s Zygmunt Menkes painting, “Cohanim Blessing.” “It brings back vivid recall that they’re able to express. Art is an external trigger; if not prompted, there’s no retrieval mechanism.”

According to Dessel, because people react in accordance with their surroundings, a cultured environment is beneficial. “Art creates life and becomes a template for living,” said Daniel Reingold, president and CEO of the Hebrew Home. “When residents debate the appropriateness of a piece of art, it’s controversial. People come to me saying, ‘That shouldn’t be here.’ Art gets people to feel impassioned, because it captures beauty or violence. Art evokes emotions, and emotions are what tell us we are alive.”

The art on display also serves as a focal point for visitors, artists, guest lecturers and intergenerational groups, with the Derfner museum as its bright center. “For years, when we knew this would be coming,” Reingold said, “we asked, what would be the right theme? Susan hit right on it with ‘memory,’ which not only portrays the challenge of preserving individual memory, but also preserving the memory of a tradition and a people.”

Malka Percal is based in New York and writes about art and culture.