Fiddlers on the Wane

Canary in a Coal Mine: Gil Shaham?s playing is consistently virtuosic, not so his label. Image by Boyd Hagen

In the world of Jewish strings, two major but disparate commemorations mark 2009: the centenary of Polish-born Szymon Goldberg, and the 10-year anniversary of the death of Yehudi Menuhin, born seven years later in New York to Belarusian-Jewish parents. 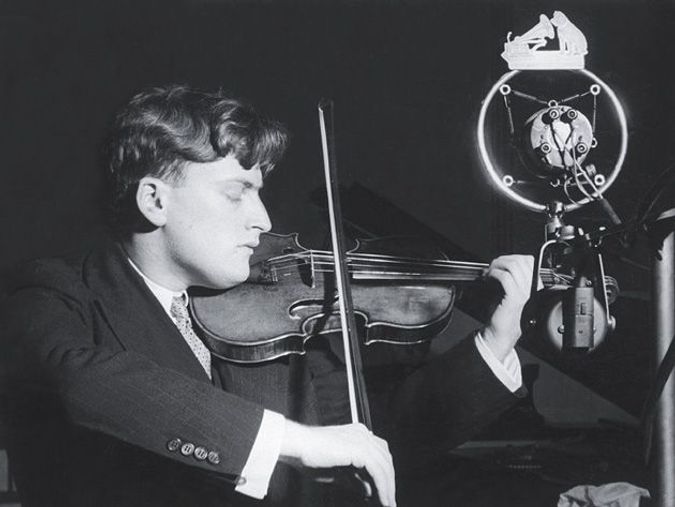 A century ago, the violin was a passport out of the ghetto, with Eastern European child prodigies like Jascha Heifetz and Mischa Elman idolized by Jewish parents everywhere. One of these massive talents, the still underrated Goldberg, was an Apollonian spirit of high-flying purity, as can be heard on the “Szymon Goldberg Centenary Edition: Vol. 1,” a revelatory new eight-CD set from Music & Arts. These Goldberg performances, most of them previously unavailable on CD, range from an idiomatically nuanced Debussy sonata to brainy readings of works by Schoenberg and Webern, all passionately elegant and incisive. Another new eight-CD set from Brilliant Classics, “Szymon Goldberg: The Philips Recordings,” also makes for ideal listening.

The vastly more famous Menuhin is in turn saluted with a massive 50-CD box set from EMI Classics, “Yehudi Menuhin: The Great EMI Recordings,” representing a choice selection that at about 50 hours long is still less than three-quarters of Menuhin’s total recordings for that label alone.

Part of Menuhin’s posthumous glory is because of the fact that from early on, he strained to be more than just a violinist, possibly because nervous troubles regularly hampered his actual playing after his child prodigy days were over. Menuhin could be a lively conductor, although I well recall seeing him lead the Sinfonia Varsovia in Reims, France, in the 1990s, wearing two prominent hearing aids. One of the violinists under his direction later confessed to me: “At least he can hear something now. In some of our previous concerts, he had on different hearing aids that didn’t work, and he was just waving his arms while we were on our own.” By contrast, Goldberg was a keen-eared, stylishly cultivated conductor, as his recordings with the Netherlands Chamber Orchestra of Bach and Mozart prove. 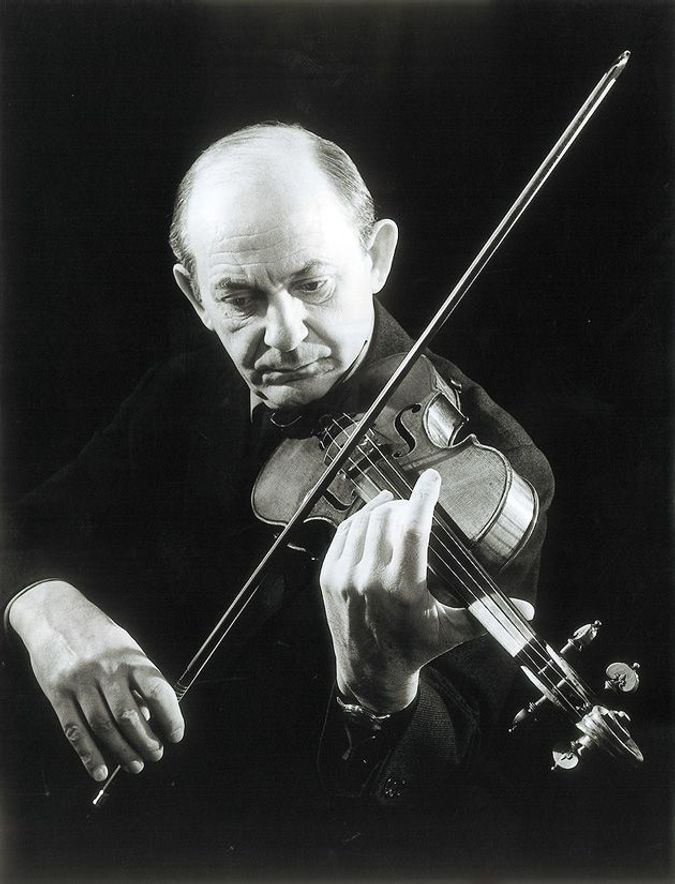 Gold Mine of Goldberg: Eight CDs of superlative music from the decades after his time in a wartime forced labor camp have just been released. Image by Courtesy of Decca

Deaf or not, in his later years Menuhin was constantly offering pronouncements on world issues, disappointingly, to the point where the Daily Telegraph termed him the “Mother Teresa of classical music.” Whereas Goldberg played in the 1930s Berlin Philharmonic under controversial German conductor Wilhelm Furtwängler and retained a decidedly mixed impression of that maestro’s wartime behavior, Menuhin, who knew Furtwängler not nearly as well, defended him aggressively, even campaigning (unsuccessfully) to get him hired as music director of the Chicago Symphony in the late 1940s.

Menuhin passed the war in safety, whereas Goldberg, after escaping Nazi Berlin, found himself imprisoned by the Japanese on the island of Java from 1942 until the war’s end. Miraculously, his hands survived the ordeal. Goldberg’s soaring live performance of the Beethoven Violin Concerto with the New York Philharmonic (on the Music & Arts set) from 1950 is one of the gems of the discography and astounding by any standard, let alone the fact that it comes barely five years after a three year-stint in a forced labor camp.

Goldberg’s tumultuous life and hard-won wisdom radiate through his playing. In 1987, after the death of his first wife, Goldberg conducted the Toho Gakuen Orchestra in Japan. There he met pianist Miyoko Yamane, who eventually became his second wife. In 1990, Goldberg became the conductor of the Tokyo-based New Japan Philharmonic, and in 1992 he moved to Japan permanently. Given his tribulations decades earlier at the hands of the Japanese, it may have surprised some to see Goldberg reconciled with the Land of the Rising Sun in this fashion. As a thoughtful, deeply reserved person, Goldberg had clearly worked out any possible contradictions in his own mind.

How very different were Menuhin’s often naive, ill-informed and verbose advocacies, whether telling young violinists to carry oranges in their pockets during recitals or offering his sometimes equally bizarre political allegiances. The latter, of course, appeared within a family context: His father, Moshe Menuhin, was a rabid anti-Zionist, and his son Gerard made headlines in 2005 when he was fired as chairman of Germany’s Yehudi Menuhin Foundation because of an interview given to a far-right German periodical, couched in typically antisemitic terms.

What Yehudi Menuhin could offer of value was disarming charm and an ever-fresh, apparently childlike, desire to learn new things. After the concert in Reims, our hosts took us on a tour of the wine cellar at one of the major local champagne manufacturers, and the ever-energetic Menuhin asked many detailed questions and concentrated on the replies as if he himself were planning a future winemaking career. From Menuhim’s earliest recordings on the EMI set, which, despite the violinist’s tender age, have a Scheherazade-like enveloping sensuality, a distinct, tender personableness infuses his playing, except when later technical problems cause performances to crash and burn.

Menuhin loved music, and he communicated that love, despite the distractions of all the other communicating he felt obliged to do. A significant symbolic moment occurs in a BBC TV documentary, “Menuhin’s Children,” in which the aged violinist assembles a group of tiny tots at his feet to share his wisdom. Menuhin accidentally steps on one kid’s hands. That shrieking child may represent all those whose hands — or toes — were stepped on by Menuhin during his long career. This was not through malice or ill-will, but instead due to clumsiness and ambition, both political and artistic, that were sadly out of proportion to his ability to carry them off.

Canary in a Coal Mine: Gil Shaham?s playing is consistently virtuosic, not so his label. Image by Boyd Hagen

With such precedents, rife with the inequalities of posthumous fame and muddled historical thinking, what can be the future of Jewish fiddling? For many years, Gil Shaham has been a brilliantly sunny presence on the concert and recording scene. Born in Illinois to a pair of noted Israeli scientists, astrophysicist Jacob Shaham (né Bronstein) and cytogeneticist Meira Diskin, Shaham has based his career on instinctual, rather than over-intellectualized, music making.

When the couple’s first child was born in 1968, they changed the family name, Bronstein, to Shaham: “Bronstein” in German derives from “brown stone,” whereas “shaham” is a brown stone commonly found in Israel. Today, Gil Shaham has run up against a different stone, as big, if not as life threatening, as the historical obstacles faced by his predecessors. The economics of the music industry mean that many of today’s finest violinists have lost their contracts with major recording labels. In addition to recording for Deutsche Grammophon, Shaham established his own CD label, Canary Classics, with admirable enterprise but decidedly mixed results.

The problem is not with Shaham, who maintains an elevated virtuoso tone throughout, but with his accompanying musicians, whether pale pianists like Akira Eguchi in music by Fauré or, on CDs of Prokofiev and Mozart, Shaham’s sister, Orli, whose musical ability is simply not in her brother’s league. There are other heavy-handed partners, like the overemphatic pianist Yefim Bronfman in Tchaikovsky’s chamber music, or conductor David Zinman in Elgar’s concerto. (The pubescent Menuhin, on the EMI set, is famously conducted in his 1932 recording of the same concerto by Elgar himself.) Another Canary Classics CD is devoted to Shaham playing “The Butterfly Lovers Concerto,” a somewhat superficial work, with film-score-like pretentions.

Clearly, today’s fiddlers, like Shaham, need to seek an alternative form of authenticity so that future generations will prize their unique contributions as today we do, selectively, those by Menuhin and, almost entirely, those by Goldberg. Great violin playing is no longer a quasi-monopoly held by Jewish performers, and today’s Jewish violinists, no longer motivated by escape from the ghetto, must bravely confront a sluggish recording industry, as well as competition from rivals of every stripe, across the world.

Fiddlers on the Wane