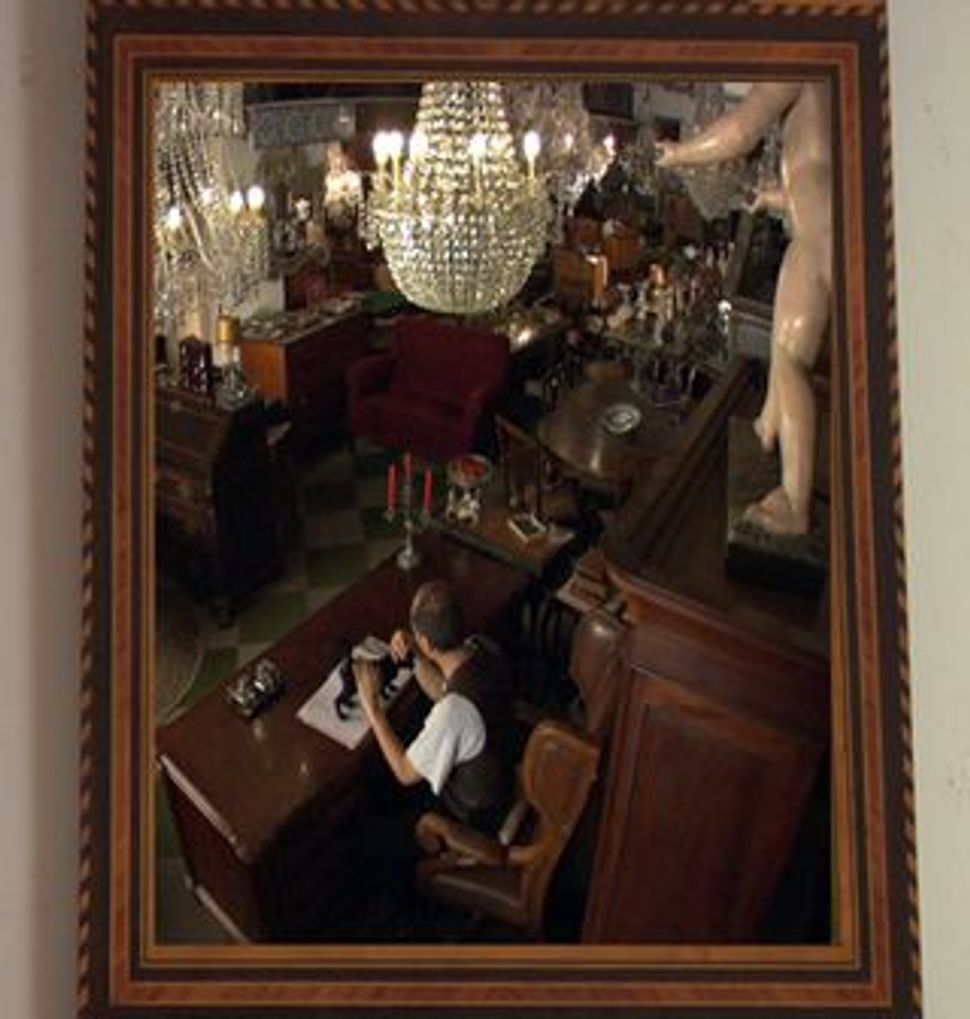 Acting in his own story: Richard Zimler has a small part as an antiques dealer in the film of his short story, ?The Slow Mirror.? Image by SOLVEIG NORDLUND

Though he still maintains his accent and caffeinated New York pulse, Richard Zimler is far better known in Portugal, Turkey, Brazil, France and England than in the United States. He may be the world’s most famous unknown living American Jewish writer. 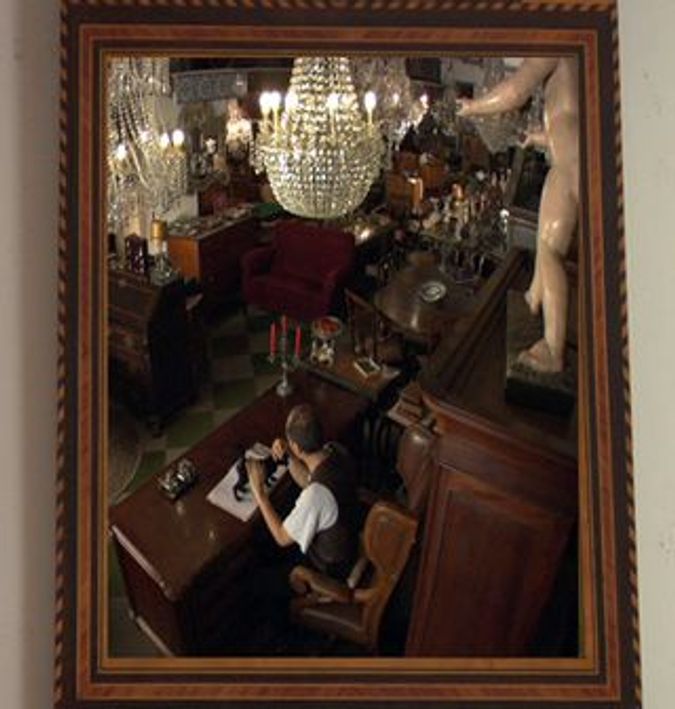 Acting in his own story: Richard Zimler has a small part as an antiques dealer in the film of his short story, ?The Slow Mirror.? Image by SOLVEIG NORDLUND

In Portugal, he has been the subject of a television documentary, and the same filmmaker just finished shooting a movie of one of his short stories, which will be aired on Portuguese television at the end of 2009.

Perhaps his is the plight of the expatriate American writer, more esteemed in his country of residence than in his country of origin. Or maybe the reason for his obscurity is that his main subject is the Sephardim: still only a nascent area of interest for an Ashkenazic-oriented publishing industry and readership in America.

If Zimler, who has written eight novels, is recognizable at all in his homeland, it is for “The Last Kabbalist of Lisbon,” a historical mystery set during the 1506 massacre of Jews in Lisbon. It was first printed in Portugal in 1996, since all 24 American publishers he tried initially rejected it. One editor even wrote back, “I’ve bought my Jew book for the year.”

It was only then that Zimler, who had been living in Porto in the north of Portugal since 1990, shipped off the English-language manuscript to a Portuguese publisher. After two months of silence, he called and she suggested he come down to Lisbon to talk. He expected to hear the same bored rejection, but instead her first words were, “So what do you want on the cover?” Since then, the book has been published in 21 countries (including America), with the Japanese and Swedish editions forthcoming.

For people in Portugal, where the book sold nearly 40,000 copies, “The Last Kabbalist” brings to light a long-buried historical event. The 1506 massacre, which took place over Passover, came after King Manuel I’s forced baptism of all Jews in Portugal in 1497, following the expulsion from Spain in 1492. They were designated New Christians, though many continued to live secretly as conversos, or secret Jews. The pogrom, led by Dominican priests and joined by many in the populace, was fueled by years of antisemitism. Two thousand Jews were slaughtered or burned at the stake. And yet, walking the cobble-stoned streets of Rossio Square in the heart of Lisbon today, there is no sign that anything like that occurred.

“The Last Kabbalist” is an intricately (some say too intricately) constructed murder mystery whose main character is Berekiah Zarco. He’s the protégé of his uncle, the eponymous kabbalist who is murdered in the family’s hidden prayer room. Rather than the plot, however, it is the sights, smells and sounds of the pogrom and life in 16th century Lisbon that hold the reader. Many of the scenes feel as though they come from a movie directed by Hieronymus Bosch, especially those where the drink-fueled mob gathers up any New Christians they can find, beheading them, cutting off other body parts and throwing them on a flaming pyre.

The book made a small splash in America, where it has sold 60,000 copies, since it was published in 1998 by the small publisher Overlook Press. Yet, “The Last Kabbalist” and Zimler’s other books have been translated into many languages, including Greek, Dutch, Hungarian, Lithuanian and Polish.

Around the world, Zimler is pigeonholed as an American Jewish writer, and he finds this ironic. He grew up in a secular home in Long Island’s Roslyn Heights, with a “Stalinist” advertising executive father and a biochemist mother who read voraciously. “God never even entered through the back window,” Zimler recalled when interviewed at a coffee shop in midtown Manhattan on a visit to see his agent. He is tall and thin with prominent cheekbones, and leans forward for emphasis. It was only through Greek mythology and Hindu myths on the family’s bookshelves that he was exposed to “a universe beyond the here and now,” he said. “I was reading about people who could fly, who turn into trees, who could go into the underworld, people with special powers,” he said.

Yet it wasn’t until he encountered a book, “A Sign and A Witness: 2,000 Years of Hebrew Books and Illuminated Manuscripts,” that something clicked. “I saw bird-headed men and women, demons and angels….” he said. “What’s going on here? Because my knowledge of Judaism was so superficial, I thought, there is something going on here that I need to find out about.”

A number of the illustrations from “A Sign and a Witness” were from Portugal, where he was moving to join his partner, Alexandre Quintanilha, a biochemist at the University of Porto. “A light bulb went off in my head — like in a comic book: I could write a historical novel about a manuscript illustrator living in Lisbon prior to the Inquisition, because then all Jewish books were confiscated and you were not allowed to be a Jew.”

Since then, Zimler has written seven other books. In addition to the three other books in his “Sephardic cycle” about the Zarco family in different eras and countries, he wrote “The Search for Sana,” a blending of fact and fiction based on a Palestinian woman dancer he met in Australia. The book was published in England in 2005, but it’s still seeking an American publisher. “The Warsaw Anagrams,” a noir set in the Warsaw Ghetto, will be published in England in the spring of 2010.

Often, his books are wrapped around the tracking down of a mystery, but Zimler chooses what he’s going to write about “when a subject takes my fancy, or when I get excited about an injustice.” He started writing “The Warsaw Anagrams” af ter reading about the day-to-day life in the Warsaw Ghetto. “I thought a lot about my relatives who went from Poland to the death camps,” he said. Zimler’s years as a journalist and as a journalism professor have affected the way he approaches his novels. “I love doing the research,” he said. “I’m turned on about finding out things people don’t know anything about… I’m writing for those people whose voices were hidden in history.”

The way in which he plays with detailed reality and combines it with mysticism links in his Sephardic cycle and the short story “The Slow Mirror,” which Swedish filmmaker Solveig Nordlund just finished shooting as a short film in English and Portuguese for broadcast on RTP, the Portuguese national television station. “He has a lot of readers in Portugal,” Nordlund said over the phone from Lisbon. “He writes like Dan Brown, religious or psychological thrillers about historical events. It’s fascinating.”

Whether Zimler breaks through to an American audience is still up for grabs. “It’s taken a long time for Ashkenazi Jews [both readers and publishers] to realize that there are other Jews out there,” said Carolyn Starman Hessel, director of the Jewish Book Council. She thinks this is changing now. What would be a more fitting sign of that change than his homeland embracing a Portugal-based American writer whose fascination with Sephardic history has captivated the rest of the world?

Jessica Siegel is a freelance writer with an interest in the history of the Sephardim.