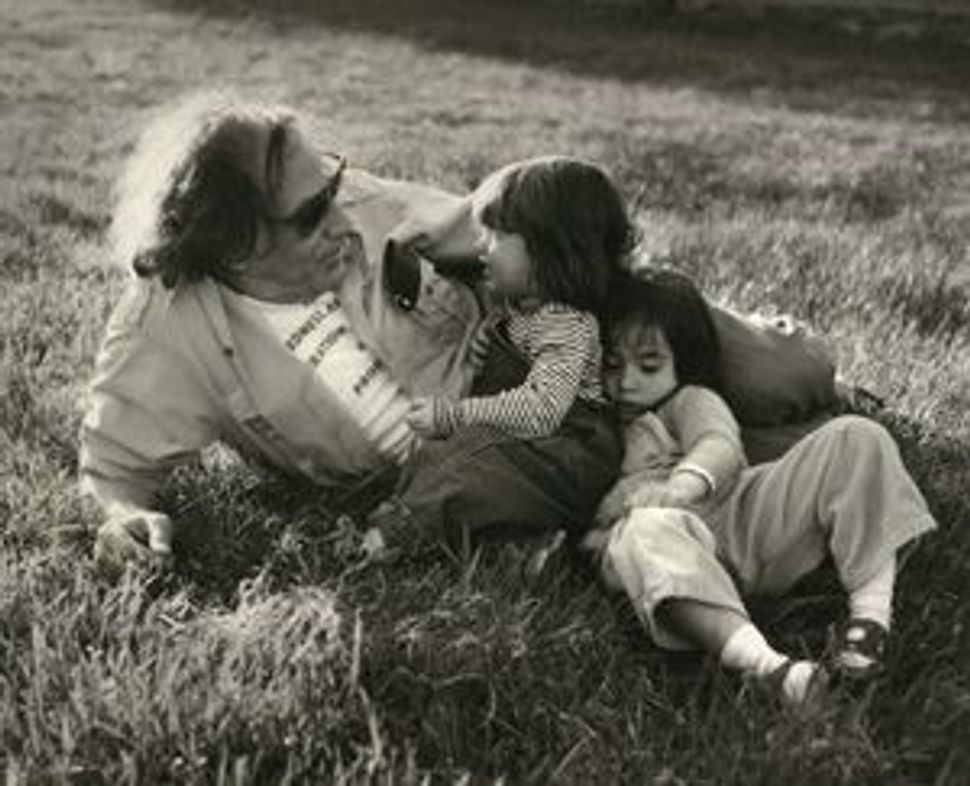 ?Daddy, Did You Save the World??: William Kunstler in a quiet moment with his daughters Emily and Sarah in 1980. Image by COURTESY OF MADDY MILLER 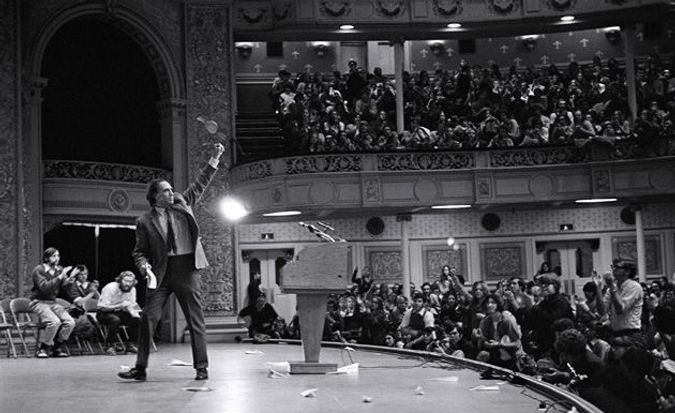 Thank You, Pittsburgh!: William Kunstler salutes the crowd as he leaves the stage while defending the Chicago Seven in 1970. Image by COURTESY OF DAVID FENTON

William Kunstler, the late civil rights lawyer, used to brag to his daughters, Emily and Sarah, that he was the only Jew in a youth street gang of Latinos and blacks.

Fueled by the values of his faith, Kunstler later commanded turf far beyond his neighborhood.

“The work that Bill did with the outcasts, the unpopular and the disenfranchised was to be a good Jew, continuing the Jewish tradition of standing up for the underdog,” Emily Kunstler said.

The Kunstler daughters have made a new documentary about their father, “William Kunstler: Disturbing the Universe,” capturing his heroism and contradictions through news footage, home movies and personal reflection.

In a recent interview with the Forward, the two offered their take on how his heritage vaulted their father from private practice to public lightning rod. He represented Martin Luther King Jr. and the Chicago Seven, earning a reputation as a rabble-rouser who could carry freedom in his briefcase. He later defended the infamous, including mob kingpin John Gotti, the so-called Central Park Rapist and the mastermind of the 1993 World Trade Center bombing. Vanity Fair called him the most hated lawyer in America.

Kunstler’s detour, from the vanguard of perceived righteousness to hand-holder of society’s underbelly, stemmed partly from belonging to a persecuted people, according to the filmmakers. Although he never spoke about antisemitism, his daughters are convinced that it steered his outlook.

The documentary chronicles his joining the 1960s anti-segregation crusade in the South as the first step in his radicalization. But his inclination took root in confronting restricted institutions years earlier. When he graduated from Columbia Law School, few opportunities awaited Jewish attorneys at the prestigious “white shoe” firms, Emily said, so he founded a practice with his brother.

“Being excluded in that way was in a sense liberating,” she continued. “It wasn’t an option to conform in the way it was for non-Jewish lawyers, so it may have been easier for him to make the choice to go south and join the civil rights movement.”

Kunstler grew up in New York City in a secular Jewish household, with German immigrant parents who were eager to assimilate. They celebrated Christmas as well as Jewish holidays.

Questions of faith shadowed him. He became a searcher, his daughters said, a connoisseur of all kinds of ceremonies. He took them to Sikh temples, Muslim mosques, Hindu temples and Catholic churches, “so we could make up our own mind,” Sarah Kunstler said.

The Kunstlers mostly celebrated Jewish holidays with the family of Kunstler’s second wife, Margaret Ratner Kunstler, who was a fellow attorney activist as well as Emily and Sarah’s mother. Margaret pushed Emily and Sarah to embrace Judaism more, and she searched for a local synagogue in Manhattan that did not preach Zionism, her daughters recalled. Meanwhile, their father had found religious sustenance in the Native American belief of the Great Spirit. It was the only theology that he ever seemed to embrace, they said. In 1973, Kunstler, already a polished showman with long hair and a gift for speechifying, arrived in South Dakota to support the American Indian Movement occupying Wounded Knee to demand that the American government honor its treaties. 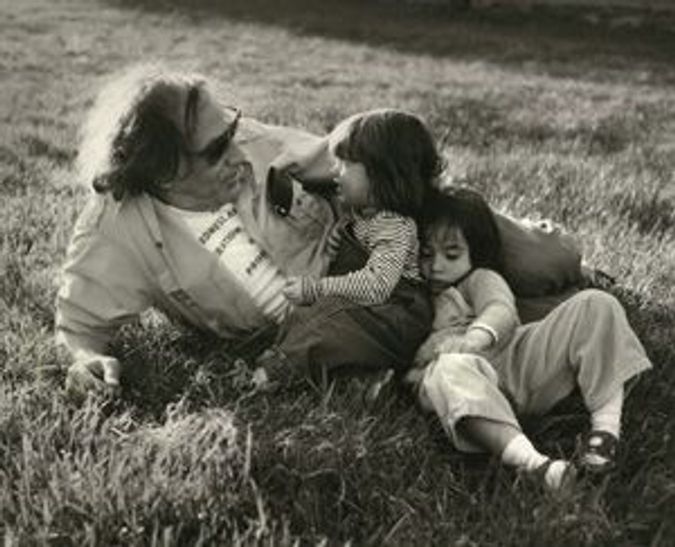 ?Daddy, Did You Save the World??: William Kunstler in a quiet moment with his daughters Emily and Sarah in 1980. Image by COURTESY OF MADDY MILLER

Kunstler, who had been president of the American Civil Liberties Union, felt that he could achieve more if he was not seen primarily as a Jew, Sarah explained. “In his outward identity as an antiracist person, he really saw himself as a white man of privilege,” she said. “That was his identity. He thought he needed to acknowledge that privilege to fight against racism.”

But Kunstler was often reminded of his ancestry. David Duke, a future Ku Klux Klan Grand Wizard and Louisiana politician, famously greeted Kunstler at a 1970 New Orleans court appearance, with a sign that read, “Kunstler is a Communist Jew.” Duke wore a Nazi uniform.

When Kunstler took up the case of El Sayyid Nosair, the accused assassin of militant leader Rabbi Meir Kahane, the Jewish Defense Organization picketed outside his brownstone in the Greenwich Village section of Manhattan. Protesters called him a self-hating Jew. On camera, Kunstler jokes that there is no Jew he loves more than himself. “He had a sense of humor about the whole thing,” Emily said. “He didn’t understand how the defense of his clients had anything to do with Judaism.”

Bullets arrived in the mail as his clientele leaned toward the notorious. While Emily and Sarah played in another part of the house, Kunstler opened his mail in a separate office in case it exploded. The girls begged him to avoid certain cases and could never understand why he would persist. They surmise in the film that he wanted to believe that even the pariahs were innocent. But the documentary works better as a warts-and-all hug than as a stab at really understanding the man behind the lawyer show.

“Disturbing the Universe” reminds viewers that both Kunstler’s idealism and flamboyance exacted a cost. Kunstler once believed in his heart that the ill-fated prisoners with whom he huddled during the 1971 riots at the Attica Correctional Facility would receive amnesty for their rebellion, according to the movie. That same man later turned into a craver of celebrity, a defender of the indefensible, critics said. He died at age 76 in September 1995, chasing controversy to the end. His client at the time of his passing was Omar Abdel-Rahman, better known as the Blind Sheikh, who was later found guilty of planning the 1993 bombing of the World Trade Center.

The uncomfortable spectacle of a Jew advocating for a sworn enemy of the Jewish people is examined in the film less than it could have been. The Kunstler daughters said they debated beforehand whether to touch more on their father’s relationship to Judaism but were at a loss on how to do it. The issue festered even after they finished the documentary.

“It’s a real tragedy in our lives and in our relationship with him that he didn’t share more Judaism with us,” Sarah said. “It wasn’t something he discussed.”

But they are convinced that being Jewish helped mold their father into a force to improve society.

“His Judaism was his lifelong philosophy to fight for social justice,” Emily said. “It was the most important thing to him.”

Watch the trailer for “Disturbing the Universe” below: