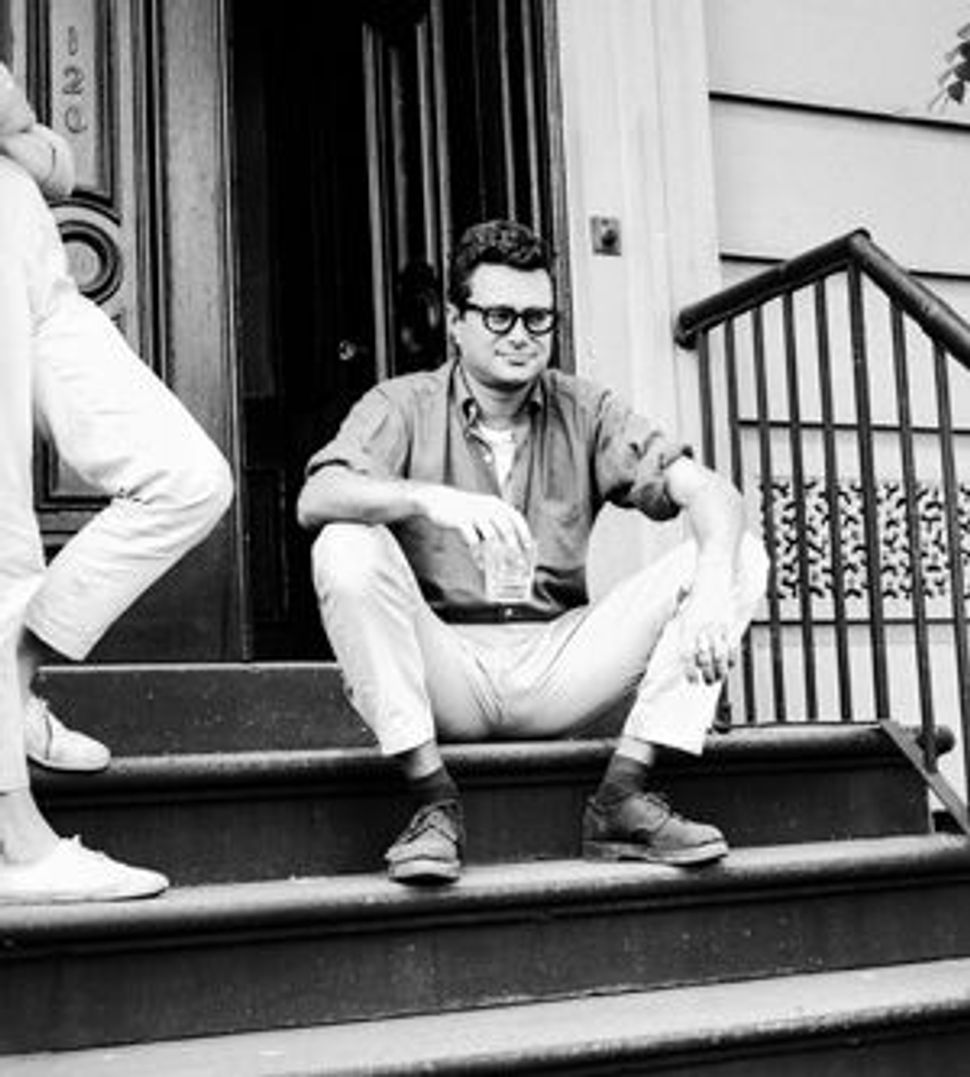 Smooth Krim: The essayist chilling on the stoop of an East Village townhouse. Image by GETTY IMAGES

Missing a Beat: The Rants and Regrets of Seymour Krim
Edited and with an introduction by Mark Cohen
Foreword by Dan Wakefield
Syracuse University Press, 296 pages, $29.95 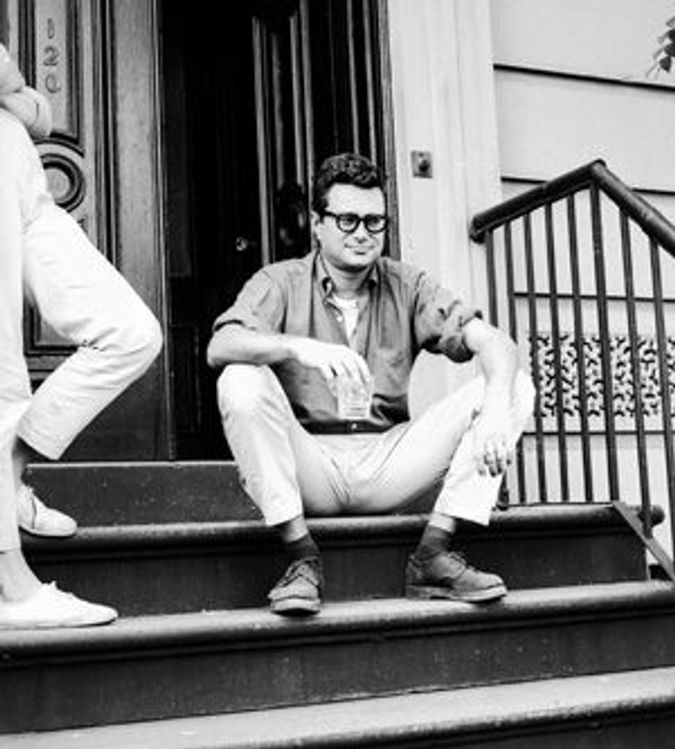 Smooth Krim: The essayist chilling on the stoop of an East Village townhouse. Image by GETTY IMAGES

Literary criticism is literature that discusses other literature, situating whatever book or poem historically, while at the same time, relating the literary work to the extraliterary: to the other arts, or to the world in general. Book reviewing is much the same as criticism except shorter, and the function it serves is often as much literary as one of consumer guidance: I give Kerouac three stars, or four, or three-and-a-half; William Burroughs’s new novel about nude dining gets two thumbs up, “a must-read.”

A literary critic is somebody who lives in a brownstone or penthouse, wears a suit, and is affiliated with either an academic institution or wealthy relatives; a bookreviewer, however, lives in a shabbier apartment, wears shabbier clothes, and drinks and smokes cheaper drinks and cheaper smokables. William Hazlitt and Matthew Arnold were literary critics, and 10,000 summer intern humanities undergraduates become book reviewers when the publications they slave for run short and need a quickie 500 words (those publications that still run book reviews).

Seymour Krim was a book reviewer who wanted to be a literary critic, and then he was a critic who wanted to be “an essayist,” but instead of either, he became a beautifully wretched, snappy hack. He was the Kerouac of Jewish New York journalism, whose takes on literature and its strange gossip column practice — “the literary life” — would become founding documents for 1960s New Journalism; especially for the journalism of Krim’s nemesis, Norman Mailer.

There are two ways to serve you up your Krim, baby: one is to write about him and his work with all the adjectives expected — “snappy,” “jazzy,” “onomatopoetic,” “verbose” — and the other is to quote from that work, and the latter is just so much more lazy fun, particularly when you’re getting paid, as Krim often was, by the word:

I should have gotten out of criticism, said to hell with it, but one turned scared at the thought because where could you go? Until the beats came along and revived through mere power and abandonment and the unwillingness to commit death in life some idea of a decent equivalent between verbal expression and actual experience, the “serious” New York literary scene was becoming a prison, to the point of shutting off the real, gamey, lowdown communication that must go into writing if it’s to have even as much meaning as the telephone. 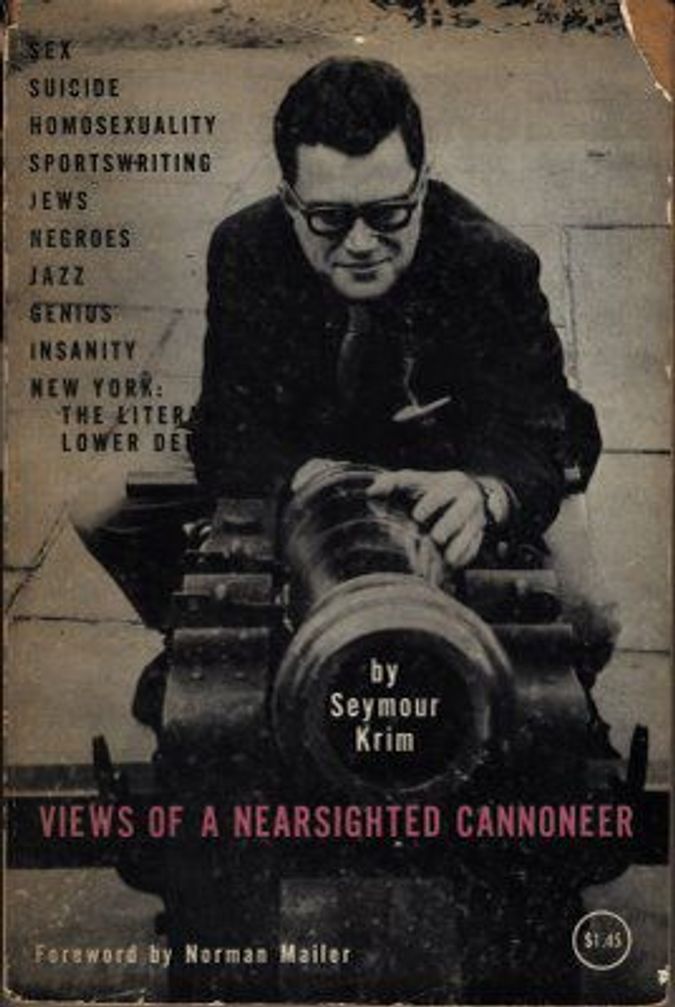 That was from “What’s This Cat’s Story?” an autobiographical essay about, and demonstrating, Krim’s creation of an original style. Born in New York in 1922, Krim was something of a middleman: easily ignored, easily forgotten, having come of age between the leftist commentariat of the 1930s and ’40s, and the generation that in the ’50s went “On the Road.” Anti-intellectual to the New York Intellectuals, highbrow neurotic to the shaggier Beats, Krim wasted his 20s and early 30s writing politely phrased “pieces” for Partisan Review, Commentary and Commonweal — Krim dry on Dreiser, Faulkner, Hemingway, Whitman — while growing frustrated daily that what made it onto the page wasn’t what he was thinking, or hearing, in his Dexedrined head:

I was weekly and monthly killing the best part of myself; setting up endless self-defeating dialogues and fancy but illogical rationalizations within; squirming always in the pain and defensiveness that goes with cheating the self of what it really wants and all for the perverted boot of being a small Name on the scene and keeping your hand in the pussy of even petty success, no matter what.

What Krim objected to was the favoring of aspiration over being, precious striving over the native and obvious: Partisan Review and its ilk were “too snob-clannish, overcerebral, Europeanish, sterilely citified, pretentiously alienated,” whereas Krim’s natural register, he naturally asserted, was colloquial, conversational, a journalistic form of “stream-of-consciousness,” which technique, clichéd by Modernism, was revived in the writings that became known as Beat. Krim, like every first-thought-best-thoughter with an ego and typewriter, wanted to describe what he saw and heard in the way he saw and heard it, and in no other way, without recourse to ideological airs or scholarship. It helped that the essays that followed this break into a new style, and so a new generation, were written for and printed in new publications: not the fusty quarterlies, but the gutter Village Voice and glossy New York Magazine, bastions not of mandarin tastemaking but of a recently commoditized counterculture.

“Missing a Beat: The Rants of Regrets of Seymour Krim” selects essays from Krim’s first collection, “Views of a Nearsighted Cannoneer” (1961), and others from “Shake It for the World, Smartass” (1971) and “You & Me” (1974), in addition to stray articles for the likes of The Nation and The New York Times. The mere presence of this book makes me happy, let alone Mark Cohen’s sympathetic editing and introductions. Krim has been out of print for too long. Though the swinging style may be dated, the best flow and turn of phrase always nullifies the worst slangy excesses — Krim consistently “stutters your butter” — and the spirit is never untrue. It can only be to the good that Krim’s memoir of Milton Klonsky is once again available, one of the most profound assessments of a fraternal affection made and strained between two of a novel breed — downtown Jews as wild in their heads as in their bodies, asking each other hot-topic questions: “Whodya like in prose right now? Chicks: Bennington or spade? Dig a tenor or a trumpet? You a Giants fan? What about Matisse?”

“Spade,” yes, and we cringe — we cringe even at “chicks” — but then flip forward in the book, and we find Krim’s fine writings on race, on blacks and Jews and their common city, on exoticism in the arts; writings that come to us with James Baldwin’s approval: “God bless him, [Krim is] almost the only writer of my generation who has managed to release himself from the necessity of being either romantic or defensive about Negroes.” Krim understood the chief peril of identity, which is that it can preserve and also calcify; it can both keep alive a tradition and petrify a soul. Blacks seeking straighter hair used to conk themselves with lye; Krim himself, as a teenager, had his caricature of a nose “fixed” (he also would walk around town without his glasses, embarrassed of how nearsighted his eyes were, despite their being perfectly acute for literary canoneering). The later scorn that Krim had for his proboscine operation was his scorn for all dishonesty: for whites who played jazz, for blacks who talked white and for the prose postures of Mailer.

The most moving essay in this Krimiad represents the author’s careericide and is called “Norman Mailer, Get Out of My Head!” It publicizes at length Krim’s resentment of Mailer’s success — of his success as a novelist and journalist (in the 1960s, Mailer would popularize Krim’s ’50s first-person shtick for higher-paying, higher-profile journals like Esquire), of his worldly presence as more than a writer and more than a man: almost as more than a God or a Krim.

You see what I’m really asking is whether one man’s public triumph — which abstractly I approve of, welcome, see as a sign of hope when it had been made out of the materials of truth — is to be another’s heartache in this homeland of mine which puts such a premium on being IT that it even cripples those of us who should know better. I don’t, I swear to you, want to write books like Norman Mailer. I don’t want to write in his style; I’ve got my own, thanks. I don’t want Mailer’s social life, his Brooklyn Heights home with its crowsnest, his part-ownership of middleweight Joe Shaw and The Village Voice, his royalties, prizes, the works — I HONESTLY DO NOT WANT THEM. But I also don’t want my friends, colleagues, women to bug me with his name, his doings, whether he frowned at Casey’s (the West Village celebrity hangout) when he went over to Barney Rosset’s table to speak to Harold Pinter, was he at his P-town house or in town over Easter?, this, that, the galling other. Slowly, unalterably, determinedly, to save my image of myself to myself, to relate to people I love WITH love and without hang-ups, to be the free man I know I am at my best and not a tense crank, TO GET NORMAN MAILER OUT OF MY GODDAMNED HEAD I must own a piece of this world more solidly than I ever have before, I can’t rationalize it, I have no other choice.

That is what is called, in journalism, “full disclosure,” and yet it is the opposite of what criticism, or even reviewing, should do: It gets at the aesthetic by way of ad hominem, making not only the prose personal, but also the critique. Krim’s critique of criticism asserted that his own prejudices and emotional truths, his inexplicable biases and those biases explicable only by his resentment and lust, were all fair game for nonfiction; that airing them was, in fact, the only way to keep the game of nonfiction fair. Know a writer’s peeves and grudges, and you know how to read him; Krim was saying that to serve another’s impartial ideal was to waste not only your talent, but also your freedom. Opinions were passions to Krim; if sublimated, he feared they’d find alternate expression: in anger, in angst and disease.

I should say, then, despite his very regular imbecility, his love of his own failure and failure to love himself, that I love Seymour Krim. I want to hug him and kiss him wetly on the fish lips. When I think of him killing himself too young in the summer of 1989, I get sentimental with what Bellow called “potato love,” meant in a spirit half generous, half damning. Krim was always poor and strong, but at the end, after years of speed use and smoking and drinking that led to a heart condition — he’d a had a major coronary, but his other heart condition was that he had a heart — he was weak and, what’s worse, unproductive, living in a trashed plaster cell on East 10th Street in Manhattan. He sent a nephew out to get the barbiturates he’d overdose on, and when the nephew returned with the pills, Krim asked for the bill and complained, “Why can’t we get a couple of dollars off if we’re buying so many?” Krim’s New York Times obituary was predictably minor, noncommittal. Mailer’s death made the paper’s front page two decades later.