An Actress for The Ages 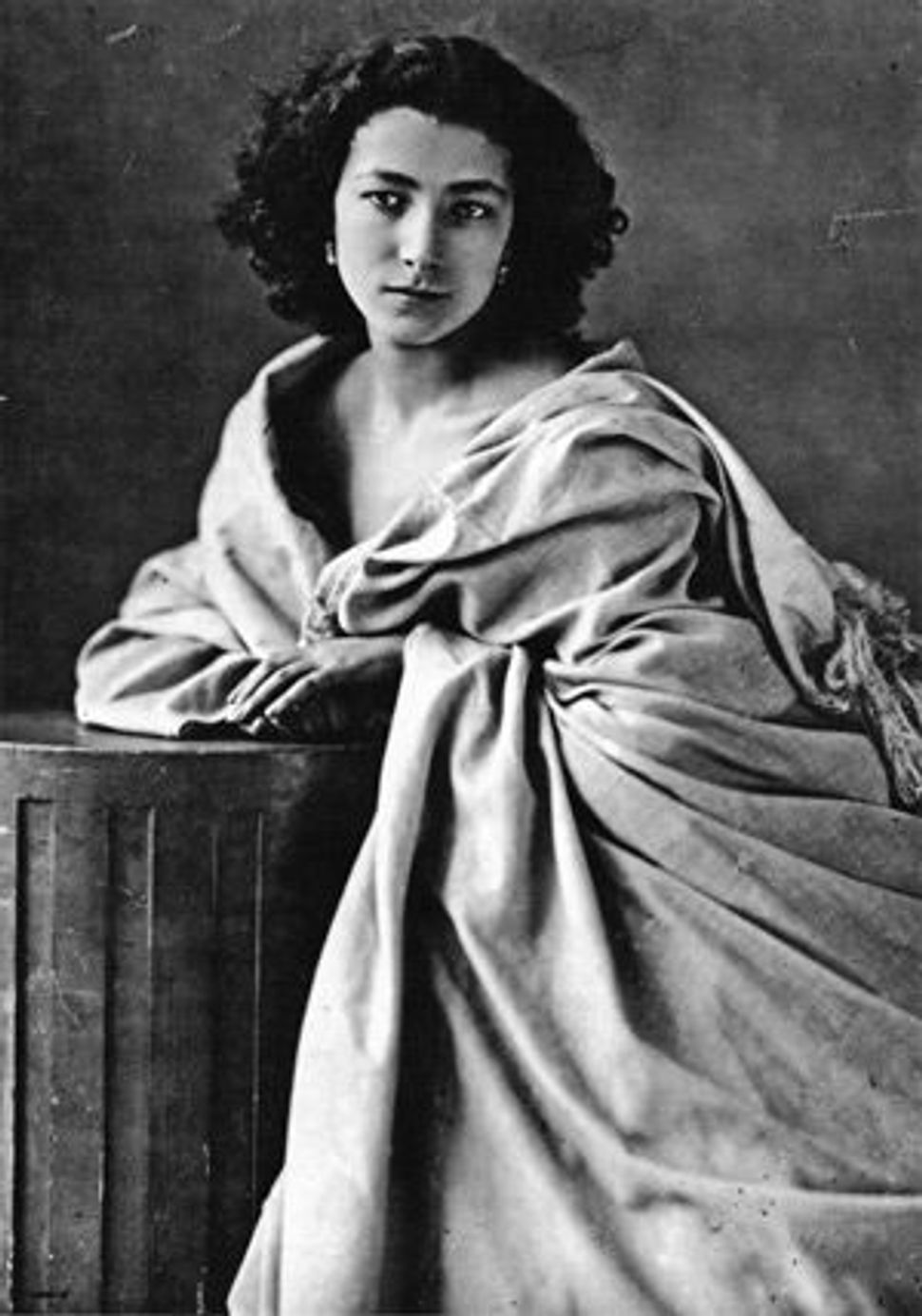 Captured Uncaptured: A young Sarah Bernhardt was preserved for posterity by the famous photographer Félix Nadar. Image by COURTESY OF YALE UNIVERSITY PRESS

Robert Gottlieb?s biography of Sarah Bernhardt is the first volume in ?Jewish Lives,? a ?major new series? being offered by Yale University Press. But in what sense did this most legendary of actresses live a Jewish life? 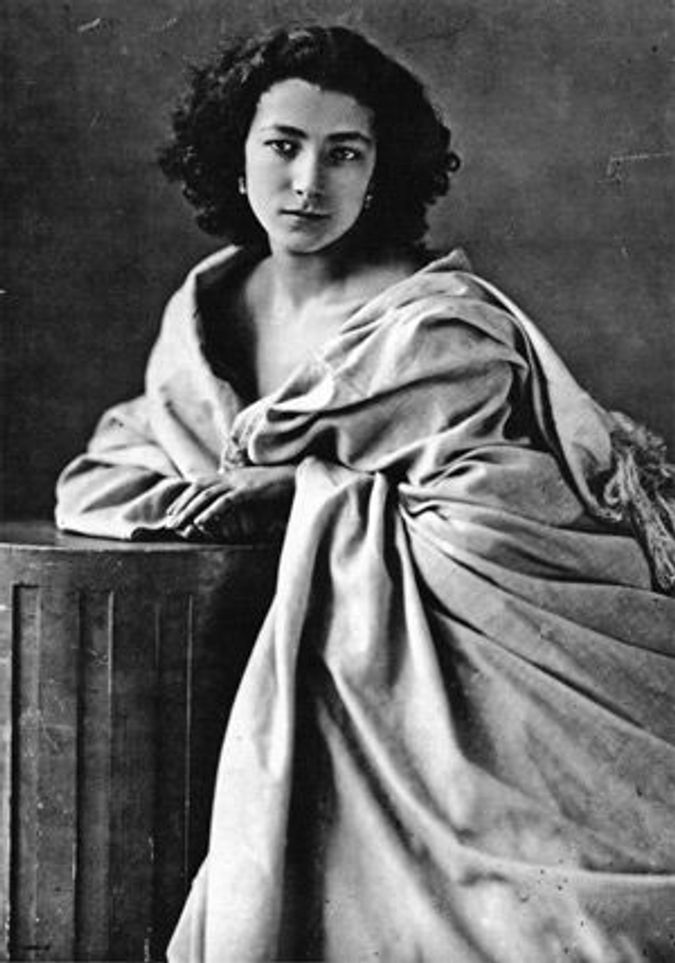 Captured Uncaptured: A young Sarah Bernhardt was preserved for posterity by the famous photographer Félix Nadar. Image by COURTESY OF YALE UNIVERSITY PRESS

Her mother was indisputably Jewish, so, halachically, she was in the clear; were she alive today, she could get married in Israel. The identity of her father is uncertain but, as Gottlieb tells us, ?no one has ever suggested that he was Jewish.? At age 9, she was sent to a convent school, and at 11, she was baptized a Roman Catholic, which remained her religion insofar as she had any at all. She proudly proclaimed herself ?a daughter of the great Jewish race? ? flaunting her ?race? as she did her lovers, in defiance of convention ? but her Jewishness had little apparent effect on her life, and less on her art.

On the other hand, Bernhardt was one of many talented and determined baptized Jews in 19th-century Europe, aware of their Jewish heritage but distanced from it, who attained the commanding heights of gentile civilization. (Gottlieb compares her to 19th-century British Prime Minister Benjamin Disraeli.) Why not consider their experience, however assimilated, as an aspect of ?the complexity of Jewish experience? that this series undertakes to examine?

Still, how do you write, for a series of ?Jewish Lives,? the biography of an artist whose art has no discernible Jewish content? Quite sensibly, Gottlieb refuses to troll for hidden signs of Bernhardt?s Yiddishkeit. His occasional mentions of her Jewishness are mainly in reference to the vicious anti-Semitic attacks against her (which failed to diminish her enormous popularity). His book, however, is an excellent, nonsectarian, brief biography, adroitly condensing Bernhardt?s extraordinary life into 219 highly readable pages.

Many facts about her are hard, or impossible, to pin down; Gottlieb judiciously weighs conflicting accounts. The book begins: ?Sarah Bernhardt was born in July or September or October of 1844. Or was it 1843? Or even 1841?? Her mother and aunt were high-class Parisian courtesans, and as a young, struggling actress she took part in the family profession. She remained zestfully promiscuous; among her lovers were prominent actors and writers and, it seems, the Prince of Wales. In her mid-60s, she had an affair with her 29-year-old leading man. Gottlieb records that she was once asked when she planned to give up love; she replied, ?With my dying breath!? Onstage, her untamed sexuality was an important part of her appeal.

Bernhardt made an inauspicious debut at the Comedie-Francaise while still a teenager, and fought her way to the top, becoming her own producer-director and running her own theatre at home in Paris. She also acted frequently in London, barnstormed through Europe as far as Russia, toured North and South America, and even appeared in Australia ? to wild applause from audiences, most of whom understood not a word she said, since she performed exclusively in French.

Silent films removed the language barrier, and she made several. Gottlieb justifiably calls her ?the first international movie star.? But films were just a sideline; she was a creature of the stage. In 1915, when she was more than 70, her right leg was amputated, but she went right on trouping, giving her last performance four months before her death in March of 1924. As Gottlieb writes, ?Her energy was inexhaustible, her determination implacable, her fame unparalleled.?

She played French classical tragedy, and she enjoyed playing trouser roles (including her controversial but popular Hamlet), but she specialized in heavy-breathing, high-rhetorical, pseudo-historical melodramas. ?In them,? as Gottlieb quotes Lytton Strachey, ?the whole of her enormous virtuosity in the representation of passion had full play; she could contrive thrill after thrill, she could seize and tear the nerves of her audience, she could touch, she could terrify, to the top of her astonishing bent. In them, above all, she could ply her personality to the utmost.? Bernhardt had little interest in the naturalistic modern drama that was emerging all over Europe. Naturalism had little to offer her; she was larger than life.

Gottlieb is not an academic scholar; rather, he is a well-known New York literary figure, a former editor in chief of Simon & Schuster, Alfred A. Knopf and The New Yorker. Avoiding pedantry on the one hand and prurience on the other, he writes about Bernhardt with convincing respect and sympathy, tempered with quiet amusement at her oddities and excesses (her parade of lovers; her private zoo; the coffin she kept in her bedroom). His lucid, conversational, urbane prose is accompanied by numerous illustrations, including a splendid ?gallery? of full-page photos showing Bernhardt in 16 of her famous roles. Gottlieb?s ?Sarah? is a fine introduction to a fascinating woman, giving the reader a lively sense of why, so many decades after her death, the name of Sarah Bernhardt, above all others, still stands for ?actress.?

Julius Novick, for three decades a theater critic at the Village Voice, is the author of ?Beyond the Golden Door: Jewish American Drama and Jewish American Experience? (Palgrave Macmillan, 2008).

An Actress for The Ages