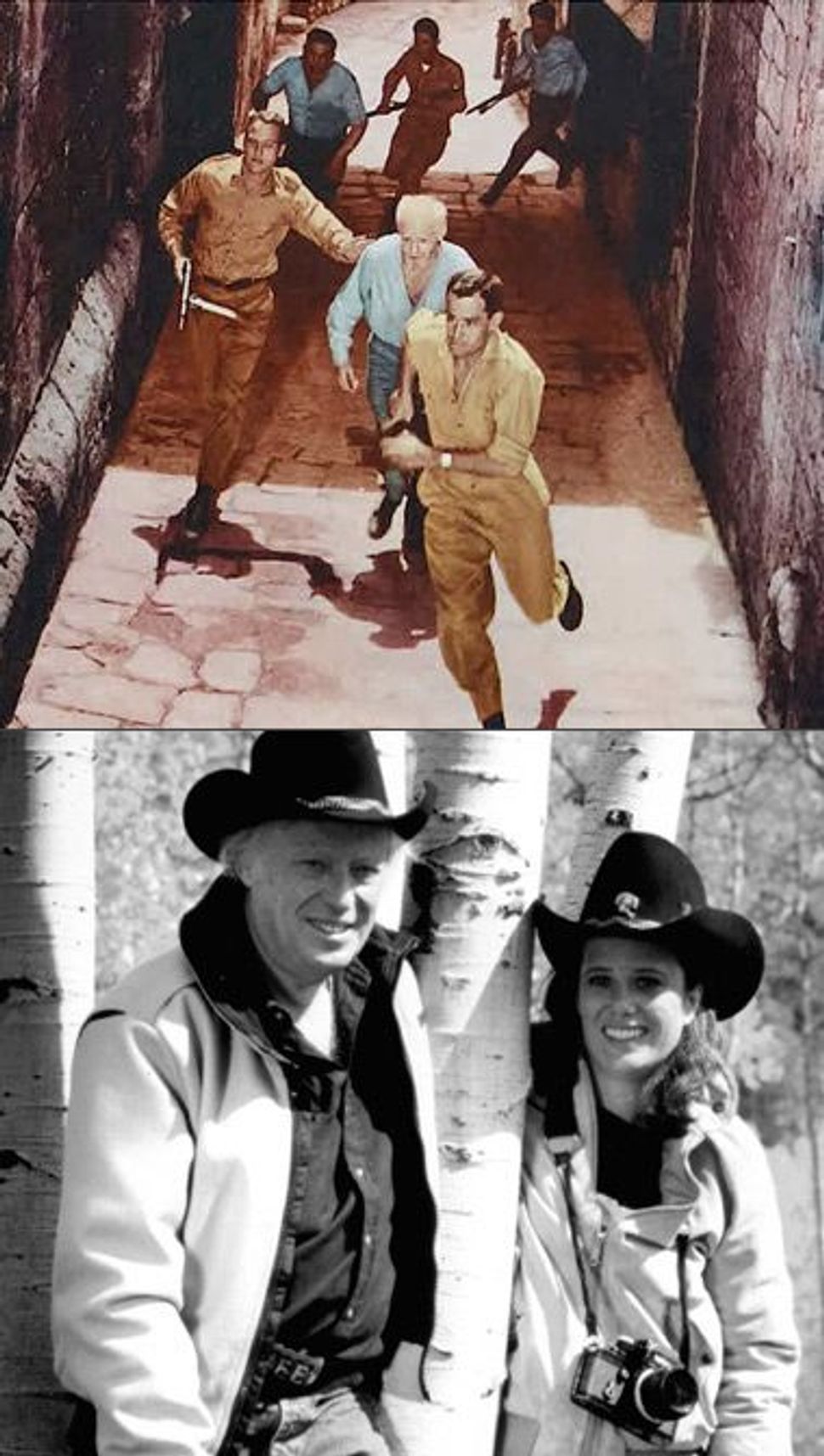 Born To Fight: Soldier Ari Ben Canaan (above, on left) and cowboy Leon Uris (pictured below with his wife Jill Peabody) were exemplary of a certain understanding of how Jewish identity needed to be fought for. Image by POSTER ABOVE FROM DOCTOR MACRO, PHOTO BELOW COURTESY OF UNIVERSITY OF TExAS PRESS

The 1958 novel ?Exodus? by Leon Uris, and the 1960 blockbuster movie that it inspired, set to composer Ernest Gold?s triumphant brassy soundtrack, significantly altered the way Americans, and the rest of the world, see the State of Israel. Yet only now have two full-length studies appeared about the book and its author: ?Leon Uris: Life of a Best Seller,? a biography by Ira Nadel, and ?Our Exodus: Leon Uris and the Americanization of Israel?s Founding Story? by M.M. Silver. Why the delay?

A half century was probably needed to acquire a clear perspective on Uris, a bellicose, two-fisted veteran of the U. S. Marines who created best-sellers from stereotypes, not by mastering the finer points of fictional art. The protagonist of ?Exodus,? Ari Ben Canaan, is an action hero repeatedly described as ?hard and powerful? and braver ?than an ordinary human being.? Surrounding Ari are ?tough and tender? Sabras who fearlessly fight with him for a homeland. In the tradition of best-sellers by such contemporaries as Harold Robbins (born Rubin) and Sidney Sheldon (born Schechtel), Uris wrote about types, not real people. Nadel, a professor of English at the University of British Columbia, confessed that he was motivated to write Uris?s biography to find out, ?How could one who wrote so ineptly still find such a wide and persistent audience??

Such an aesthetic question ultimately proves of secondary importance in studying the sociological impact of a best-seller. According to Kathleen Cain?s 1998 ?Leon Uris: A Critical Companion,? published by Greenwood Press, the various editions of ?Exodus? have sold ?over seven million copies.? Silver, who heads the general studies department at the Max Stern College of Emek Yezreel, offers a brilliantly incisive analysis of the seething cross-cultural currents in ?Exodus,? both novel and film. Uris, resenting his impoverished Russian-Jewish father, William Yerusalimsky (whose name was shortened to Uris by an Ellis Island official), created works full of aggression, profanity and the simplistic worldview of a cowboy movie. Indeed, in 1957, Uris penned the screenplay for the iconic Hollywood Western ?Gunfight at the O.K. Corral.? 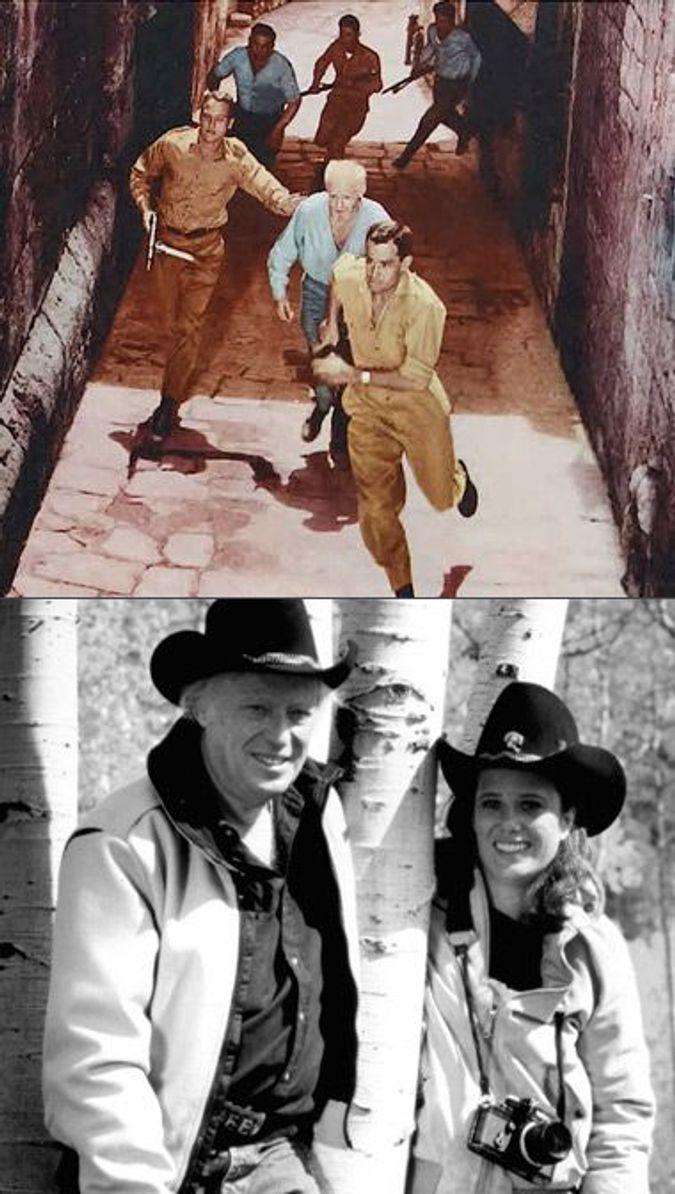 Born To Fight: Soldier Ari Ben Canaan (above, on left) and cowboy Leon Uris (pictured below with his wife Jill Peabody) were exemplary of a certain understanding of how Jewish identity needed to be fought for. Image by POSTER ABOVE FROM DOCTOR MACRO, PHOTO BELOW COURTESY OF UNIVERSITY OF TExAS PRESS

As Silver notes, despite its obvious subject matter ? Israel?s founding ? the novel ?Exodus? is not principally ?about? Israel, but instead deals more generally with ?Jewish empowerment? in the post-Holocaust world. As Israeli sociologist Oz Almog pointed out in ?The Sabra: The Creation of the New Jew? (University of California Press, 2000), in the 1950s many Israelis looked upon Holocaust survivors with empathy ?accompanied by an ?I told you so? attitude.? In ?Exodus,? Uris omits most of the empathy, instead directing an accusatory glare at Diaspora Jewry, inspired by his own despisal of his father as a failed ?shtetl Jew.? As Silver cogently argues: ?Exodus? narrative rewarded only those Jews who engaged in Guadalcanal-type acts of heroic resistance against the Nazis. The old ghetto Jews who reacted passively to their tormentors had no license to live in Uris?s imaginative world? Hitler?s victims deserved their fates because they were not Zionists.?

Even Anne Frank gets little sympathy from Uris, as he writes in a 1958 letter to his father after seeing the Broadway production of ?The Diary of Anne Frank?: ?I do not like to see Jews hiding in attics, and feel there is something far more decent about dying in dignity which is, of course, the choice that every Jew had.? This type of macho ?Inglourious Basterds?-style expectation came from a pop-fiction author firmly ensconced in his California seaside home, and later in a Colorado ski chalet. Uris made no personal sacrifice beyond his own early military service, and certainly made no individual aliyah. As Silver notes with an eye for its inherent paradox, one of Uris?s key achievements was to ?make the Zionist idea of the ?negation of the Diaspora? wildly popular among Diaspora Jews themselves.?

Among these Diaspora Jews negated by Uris were his own literary contemporaries. The paperback edition of ?Exodus? features a note by Uris attacking Jewish authors whose fictional characters ?spend their chapters hating themselves, the world and all their aunts and uncles ? all those steeped in self-pity ? all those golden riders of the psychoanalysis couch.? The unnamed targets, Mailer, Bellow and Malamud, did not react, but Philip Roth, during a 1961 Loyola University symposium, scorned ?Exodus? as ?bald, stupid, and uninformed? neither history nor literature.? Most readers ignored Roth?s qualms, especially after the film directed by Otto Preminger leavened the narrative with a degree of ironic humor absent from the book, and heightened the Americanization of Israel?s founding by casting the improbably preppy-looking Paul Newman as Ari, along with screenplay Americanisms (including an allusion to the Boston Tea Party, as Silver observes).

The power of Uris?s best-seller was based on such adulteration of historical truth into page-turning action narrative. American Jews were in fact on board the ship ?Exodus,? which in 1947 carried illegal immigrants to the British Mandate for Palestine. This fact was consciously omitted by Uris, who feared that showing ?American Jews deeply involved in the Jewish statehood struggle would be confusing and would possibly alienate readers who were worried about political loyalty issues during the Cold War,? Silver notes.

The novel ?Exodus? likewise depicts Arabs as stereotyped villains and gives incorrect details about Nazi atrocities, claiming that Adolf Eichmann was ?born in Palestine and spoke fluent Hebrew.? (In fact, Eichmann was born in Solingen, Germany, and could utter only a few words of Hebrew, according to a witness at his 1961 Jerusalem trial.) ?Exodus? also cites, among Auschwitz atrocities, a Polish doctor, Wladyslaw Dering, who supposedly performed upon prisoners ?17,000 operations without anesthetic.? As Silver details, the real-life Dering sued Uris for libel, claiming that he performed ?only? 130 operations without using an anesthetic and that the resulting trial, which ended with trivial damages awarded to Dering, inspired ?QB VII,? Uris?s best-selling 1970 novel. The book became a 1974 TV miniseries that starred Anthony Hopkins as a fictionally renamed Dering.

Dwelling on such inexactitudes can be merely distracting, as when Nadel gloats about Uris?s unhappy marriages, quoting letters from a disgruntled ex-wife, and even describes when Uris was hospitalized in Manhattan at age 65 ?after an incident with a black prostitute.? Uris?s life was intrinsically unedifying, just as his literary influence today is nil, despite Nadel?s implausible claim that Uris?s ?legacy? exists in books by William T. Vollmann and Jonathan Littell: ?Like Uris,? Nadel asserts imprecisely, ?these writers treat war, history, and culture as necessary proving grounds for ideas, politics, and heroism.? Silver more aptly identifies the extraordinary pull of Uris?s work, in its day, as an extra-literary phenomenon, a glorification of Jewish machismo that, although of only historical validity ? unlike the ongoing popularity of the soundtrack for the film version of ?Exodus? ? was exactly what millions of readers and filmgoers needed at the time, as a means of coping with a historical tragedy.

And watch a Dutch choir perform the same repertory in 2008 below: